The History of a Place in a Single Object, with Multiple Variations

Nicky Harman looks at translating tools, and it's more fascinating than you'd think.

It’s not often that I, as a translator, get to do research on the place where a particular author’s novels are set. In fact my recent visit, with Dylan King, to Shaanxi province to Jia Pingwa to look at where his novels Shaanxi Opera (AmazonCrossing, forthcoming) and Broken Wings (ACA, 2019) were set, was a first. We arrived with a list of questions of the ‘What does that tool do?’ and ‘What kind of a gate entrance is that?’ variety. We were primarily motivated by wanting to get the words right in translation. But it led Dylan and me into discussing the wonderful BBC/British Museum radio series, the History of the World in a Hundred Objects, and what follows is (with apologies to Neal MacGregor) a small meditation on what a particular tool can tell us about a place and how people live there.

The tool: a stone object in two parts that grinds up grain and spices, and produces soybean milk from the raw beans. There are two variations:  碾盘nian3pan2, also known as碌碡liu4zhou, consisting of a base stone and a cylindrical roller; and 石磨shi2mo4 or 磨盘 mo4pan2, made up of磨扇mo4shan1，two circular stones, one atop the other, the bedstone (下扇) which stays still，and the upper stone (上扇) which moves around. In both versions, the top part is pushed around by a human or a beast. At least that’s what used to happen.

Shaanxi is a province in North-West China, with a mountainous southern region, and an arid northern plateau. It’s home to author, Jia Pingwa, whose stories are set either in the present day or in the very recent past, so I was rather surprised that when we visited the villages, our hosts didn’t share my consuming interest in millstones and stone rollers. They were clearly not part of their lives any more. All the same, in the interests of translation research, we co-opted Jia to do us a drawing, and then went on a hunt for millstones. (Below, Jia has found us a millstone.) 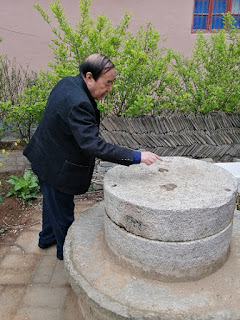 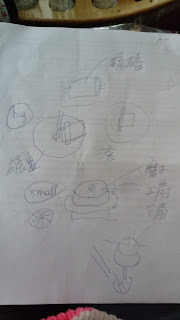 Actually, rather like staddlestones in the south of England, once you spotted one, you could hardly avoid falling over dozens of them. But, also like staddlestones, with a couple of exceptions, they were not being put to the use for which they were originally intended. 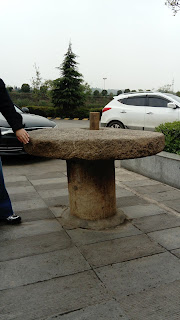 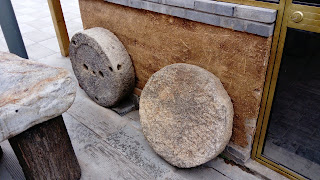 Broken Wings is set quite far north of Xi’an, too far for us to get to in a day. Perhaps there, grains and beans are still ground the traditional way. But in Jia’s home village棣花 Di4hua1, south of Xi’an, the tools appear to have turned very quickly into nostalgia items. Once a poor backwater, Dihua has been yanked out of poverty by its famous author and his novels, so who’d bother with the hard work of grinding by hand? When we arrived in the village, I couldn’t help being reminded of Castle Combe, a village near where I grew up, which became a major tourist attraction after the Doctor Dolittle was filmed there. The difference being that the Castle Combe locals were apparently infuriated by Hollywood’s intrusion while there’s no reason why the residents of Dihua should be anything but happy with the current rise in their standard of living.

It was the same in the Guanzhong area, which we visited the next day….millstones adapted for paving and picnic tables. And a healthy dollop of nostalgia that most people wouldn’t associate with the hard-scrabble life of a Chinese village: chillies are ground by a power-driven stone rollers on the streets of the county town 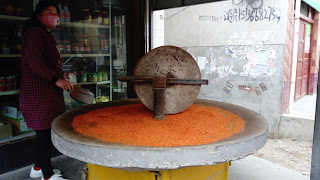 – because the tool draws the punters; and 石碾, or ‘stone-ground’, appears to have acquired all the marketing appeal that the word has in English: this placard in a village advertises stone-ground chillies. 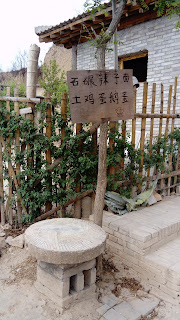 You could say that re-purposing millstones as paving stones is simply common sense. What surprised me was that the milling process seems to have acquired a nostalgia so very quickly. I mean does anyone really think that chillies ground between stones taste better than ground between steel blades?

We all know that in the UK, village cottages embody a romantic ideal, at least for retirees. Chinese villages, on the whole, are places people want to get away from. There are some village revival projects, for instance, Bishan, and they celebrate vernacular architecture and crafts, but they’re aimed at reviving village economies. Is there really in China an equivalent of the roses-round-the-door effect, that nostalgic longing for country life so typical of the UK? Well, except perhaps now there is, in the stone-ground chillies phenomenon.
.................................................................
For a review of Broken Wings and the very real poverty in which it is set, see Avtar Singh in Nikkei Asian Review.
Posted by Nicky Harman at 15:55