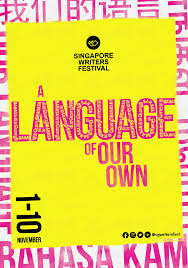 The 22nd annual Singapore Writers Festival (SWF) returns this November with the theme A Language of Our Own. This edition seeks to examine the role of languages in the formation of identities and communities at a time when the world is becoming increasingly globalised, yet fractured. The theme invites authors and audiences to reflect on how they talk about different types of language, including non-standard ones such as emojis and Singlish, the local blend of English with words taken from Malay, Tamil and various Chinese dialects. Sessions will explore how, as systems of communication, languages have both the power to create a sense of belonging and also to cause displacement.

Festival director, Pooja Nansi, says: “Language allows us to navigate through an increasingly complex and multi-faceted world. This year’s theme invites audiences to reflect on how language can be used to rethink existing social models and evolve to accommodate the changing tides of our present. We hope to spark conversations around the importance of language in the formation of our sense of self and community, and in turn, how language can foster a more inclusive society in a culturally and linguistically diverse Singapore.”

Literary heavyweights from around the world will be attending. These include:

Roxane Gay (US)
Born in Omaha, Nebraska to a family of Haitian descent, Roxane Gay is the author of The New York Times best-selling essay collection Bad Feminist. She has also been named as a writer for Marvel Comics’ World of Wakanda, making her the first black woman, alongside Yona Harvey, to be lead writers for Marvel. Her work deals with the analysis and deconstruction of feminist and cultural issues, and speaks strongly to SWF's focus on exploring the ways in which we use language and its effects on diversity and inclusion. Alongside Singaporean playwright Joel Tan and Canadian novelist Kagiso Leseho Molope, Gay will be speaking at the Festival Gala, a new format that invites authors to talk for 15 sustained minutes, as opposed to the more conversational mode of a panel discussion. The topic will be Language and the Body.

Marlon James (Jamaica)
Marlon James is the author of four novels: John Crow's Devil; The Book of Night Women; A Brief History of Seven Killings, winner of the 2015 Man Booker Prize; Black Leopard, Red Wolf , known as the African Game of Thrones. Often his novels confront the struggle to find an identity. This year, SWF will be bookended by the Festival Prologue and Epilogue. James will be delivering the Festival Prologue on the power of language and stories in exploring concepts of diversity and representation. Meanwhile, The Festival Epilogue will be delivered by critically-acclaimed Singaporean playwright, Haresh Sharma, who will be discussing languages and literature, as well as the importance of multiculturalism in Singapore.

Min Jin Lee (Korea – US)
Min Jin Lee is the author of Free Food for Millionaires and Pachinko, a National Book Award finalist. She will be speaking at An Hour With Min Jin Lee on how Pachinko presents the intricacies of being a perceived outsider, and on the power of fiction in bridging cultures.

Pico Iyer (UK)
Pico Iyer is an essayist and novelist, best known for his travel writing. Having grown up a part of – and apart from – English, American and Indian cultures, he became one of the first writers to make the international airport itself as his subject, along with associated topics of jet lag, displacement and cross-culturalism.  He will be speaking at two events, Beyond Borders, Beyond Words and Untold Stories of Places, as well as participating in the SWF Book Club, a conversation inviting writers to talk about the books that changed their thought about language.

Other programme highlights include:

Celebrating SingLit
As part of SWF's efforts to cultivate and deepen public appreciation of Singaporean literature it will honour Eurasian author Rex Shelley as its Literary Pioneer this year. Shelley, winner of the prestigious Southeast Asia Write Award in 2007, will be celebrated through programmes including a multi-media exhibition by Brian Gothong Tan titled Rex Shelley: The Gentle Observer, and a late-night event inspired by his seminal work, The Shrimp People.

Southeast Asian Focus
SWF will continue to provide a platform for the promotion of Southeast Asian literature, with a dedicated series of panels and talks profiling Southeast Asian writers and their works. Topics of discussion will include: postcolonial insights on Malay literature; art and visual culture in Southeast Asia; the challenges and triumphs faced while working in cross-cultural collaborations; the indigenous language and culture of Sarawak, which will be showcased in a performance by Nading Rhapsody, an avant-garde ethnic Bornean ensemble.

Language Tracks
As one of the few multi-lingual literary festivals in the world, SWF will feature programmes across Singapore’s official languages: English; Malay; Chinese; Tamil.

Country of Focus
This year’s Country Focus is Canada, a multi-lingual, multi-cultural and multi-racial country that draws many parallels with Singapore. The pertinent issues of immigration, and cultural and linguistic diversity in both countries also resonate with the festival theme, and should allow for a rich exchange of ideas. SWF will welcome ten highly acclaimed Canadian writers, including Chelene Knight, a poet and creative non-fiction writer of the memoir Dear Current Occupant, which won the 2018 Vancouver Book Award, and Kamal Al-Solaylee, a Yemeni-born journalist and author of Brown: What Being Brown in the World Today Means (to Everyone) and Intolerable: A Memoir of Extremes.

Lynn McDonald, High Commissioner of Canada in Singapore, says: “We are thrilled that Canada is the Country of Focus for this year’s SWF and we look forward to having our Canadian writers engage with Singapore’s passionate literary audiences. A Language of Our Own is a theme that resonates strongly with Canada: like Singapore, we celebrate our rich linguistic and cultural diversity as a source of strength and a fundamental part of our Canadian identity. The ten Canadian writers who will participate in SWF this year are a true representation of our country’s literary talent and our unique multi-cultural mosaic. We look forward to deepening our mutual understanding and appreciation of the power of language to promote inclusion through the meaningful programmes offered at SWF this year.”

For more information click here.
Posted by Rosie Milne at 11:22