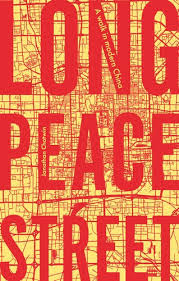 Jonathan Chatwin writes on travel, culture and history with a particular focus on China. His first book, Anywhere Out of the World, was a literary biography of the travel writer and novelist Bruce Chatwin. His essays and articles have been published by the British Film Institute, the South China Morning Post, the Los Angeles Review of Books, Caixin, Studies in Travel Writing and the Asian Review of Books amongst others, and he now writes regularly on Chinese history and culture for a range of publications.

Jonathan's new book, Long Peace Street, intertwines travel and history to tell the story along the so-called Number One Street of China, Chang'an Jie, or the eponymous Long Peace Street, which bisects China's capital, Beijing, and which he walked from end to end.

Here, Jonathan introduces both his book and the street, and explains what inspired his walk.

In 1955, the intellectual and writer Simone de Beauvoir visited China. In the book which resulted from her visit, The Long March, she observed the dual power of walking and carefully observing: "Appearances also have their reality," she writes, "to walk down a street is an immediate, irrecusable experience for which no hypothesis about a city, however ingenious, can be a substitute." Years before I read De Beauvoir's book about China, I had written a related aphorism of George Orwell's up on a scrap of paper above my desk. It came from an essay of his, and asserted that: "to see what is in front of one's nose needs a constant struggle."

My walk across Beijing was inspired both by the value De Beauvoir ascribes to the simple act of observation, and the struggle Orwell asserted was needed to do so clearly. I had lived just off Long Peace Street, and my act of walking across the city was an attempt to preserve it as a singular experience, heavy with the weight of individual and limited understanding, which I could then hold and examine, turning it slowly in the glow of history and memory to see how it caught the light.

Splicing China’s capital, Long Peace Street runs from the edgelands of western Beijing, where the city meets the mountains, across to the eastern suburbs: arrow-straight, twenty miles long and ten lanes wide.

At its centre it divides the Forbidden City, home to generations of Chinese emperors, from Tiananmen Square, the vast granite rectangle built to glory the New China of Mao Zedong. It is a storied stretch of the Middle Kingdom, littered with physical and architectural reminders of the seemingly unrelenting drama of China’s recent past: Babaoshan Revolutionary Cemetery; Diaoyutai State Guesthouse, headquarters of the Gang of Four during the Cultural Revolution; Muxidi Bridge, site of some of the worst violence of June 4th 1989; ministries; museums; military and governmental compounds.

Long Peace Street emerged in its current form after the Communist victory of 1949. Beijing was reinstated as the country’s capital – the Nationalist Party had moved it away in 1928, first to Nanjing, and then inland to Chongqing as they were pursued by Japanese forces during the Second Sino-Japanese War (1937-1945). The city at the time was a shadow of its former self.

Lao She’s play, Dragon Beard Ditch, which opens in 1948, describes in its stage directions the hardships of life in the city for his characters: "Their houses may tumble down at any moment; most of their yards have no lavatories, let alone kitchens. There is no running water; they drink bitter and rank-tasting well water. Everywhere there are swarms of fleas." Creative exaggeration, perhaps, but based on a reality of poverty in late 1940s Beijing.

Debate raged when the Communist Party of China (CCP) took control of Beijing. The architect Liang Sicheng, son of reformist Liang Qichao, was appointed to advise on the new form the city should take: he believed strongly that the imperial pattern of the city, oriented around its north-south axis, should be preserved and suggested that a new administrative centre be built along a parallel line out in the farmland to the west of the old city. Under the influence of the then-ubiquitous Soviet advisors, the authorities elected against this plan however, and – without any coherent master plan, it must be said – the city began to orient itself around a new axis, running from east to west, and cutting through the centre of the old city. Over the course of the first decade of Communist Party rule, Long Peace Street would emerge from the rubble of the old world to become a symbol of China’s bold socialist future. By the tenth anniversary celebrations of 1959, the street was eighty-metres wide where it cut between the Gate of Heavenly Peace (Tiananmen) and the square to which it gives its name – which had also been refashioned in the intervening decade into the sterile granite rectangle it remains today.

Over the decades since, the street has been extended even further, and the monuments to CCP rule along Chang’an Jie have been joined by sleek shopping malls, skyscrapers, and the mirrored headquarter offices of corporations, ministries and state-owned enterprises. More of the city’s alleyways, or hutong, and the courtyard houses along them, have been lost, along with temples, markets and ceremonial archways and gates. The city now sprawls out to east and west, ranks of uniform apartment blocks crowding its suburbs. A new urban plan intends to make Beijing the centrepiece of a new 130-million-person megalopolis, named Jing-Jin-Ji, its name taken from the cities of Beijing and nearby Tianjin, and an ancient name for the province of Hebei. A walk along Long Peace Street tells not only of the city’s past then, but also its continuing and seemingly permanent state of revolution.

If what defines a city, or indeed a country, is not its pure physical being, but rather the accumulation of ephemeral qualities – cultural, historical and social – specific to that place and people, perhaps the radical reconfiguration underway does not matter. This, after all, is a city which has demonstrated its ability to adapt and sustain over centuries. As Juliet Bredon observed in the early 20th century: "The history of Peking is the history of China in miniature, for the town, like the country, has shown the same power of taking fresh masters and absorbing them. Both have passed through dark hours of anarchy and bloodshed. Happily, both possess the vitality to survive them." But though the emotion can be chalked up to the naivety or nostalgia of the outsider, it is hard not to worry, when surrounded by all this newness and change, that something more intangible, beyond simple bricks and mortar, is also being lost.

In his account of the life of the legendary Theseus, the Greek historian Plutarch presented a paradox relating to the preservation of the king’s ship. It had been kept by the Athenians, Plutarch writes, for many centuries, and those tasked with its preservation had replaced the ship’s timber as it rotted. Philosophers have since debated the logical problem presented by this restoration; namely whether, if one replaces every part of something, it remains the same thing. The story became, and has remained, in Plutarch's words: "a standing example among the philosophers, for the logical question of things that grow; one side holding that the ship remained the same, and the other contending that it was not the same".