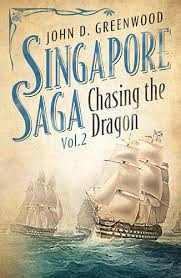 John D. Greenwood is a Scot now transplanted to America. He began his career teaching philosophy, including a stint at the National University of Singapore, but he has since become an historian of psychology. He is currently in the midst of writing a projected six-part series, Singapore Saga, which will, when completed, offer a fictionalised overview of the first hundred years of modern Singapore's existence, from its founding by Raffles in 1819, to the aftermath of World War One, in 1919.

Volume 2, Chasing the Dragon, covers 1834-1854, and continues to portray the lives of the early pioneers of the expanding port city. It also extends to Borneo and China, encompassing the careers of James Brooke, the White Rajah of Sarawak, and of Hong Xiuquan, the failed scholar who dreams he is the second son of the Christian God and launches the Taiping Rebellion.

So, over to John, to talk about Chasing the Dragon…

People often say they think they have novel in them. I never did. And I never thought I would write an historical novel about Singapore.

I came to Singapore in the mid 1980s to teach at the National University of Singapore. I fell in love with the city, the people and of course the food, but had no thought of a novel. I returned again in 1999-2000, and got interested in the history of Singapore, but still no thought of a novel. Until almost the very end, when a friend returned my copy my Edward Rutherfurd’s historical novel London. My friend said someone should write a book like that about Glasgow. Then the light bulb went off in my head. No, someone should write a book like that about Singapore!

Once the thought was out, I could not rest. I lay awake in bed that night and stared at the ceiling, with ideas buzzing around in my head. At around two in the morning I rose and wrote the story of Moon Ling, the shipwrecked Chinese street opera artist, which came to form the preface of Forbidden Hill.

From that point on I read everything I could about the history of Singapore, returning to the city in 2008-2009 to continue my research, including reading the newspapers from the early 1820s onward. I devoted every spare moment to writing the novel, calling a halt when I reached half a million words and discovered I had only covered the first fifty years. I chopped the manuscript into three separate works, comprising the first three novels of Singapore Saga.

Like Forbidden Hill, Chasing the Dragon follows the richly interwoven lives of its fictional and real characters, including pirate fighters; secret society soldiers; tiger hunters; a Malay magician; a were-tiger; a pontianak; a mesmerist who provides anaesthesia for a dangerous surgery; a mother haunted by the ghost of her abandoned child; Mother Mathilde, who founds a convent school for orphans; Tan Tock Seng, who arranges for the funeral services for Chinese paupers and destitutes, and donates money for the founding of a hospital for the sick poor of all nations; and Diang Ibrahim, the Temenggong of Singapore, who makes his fortune from the sap of the gutta-percha tree.

Details: The Singapore Saga series is published by Monsoon Books, with titles available in paperback and eBook. Priced in local currencies.