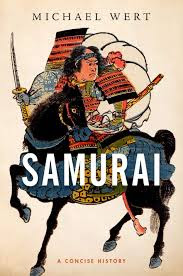 Michael Wert is Associate Professor of East Asian History at Marquette University in Wisconsin. Specializing in early modern and modern Japan, he is the author of Meiji Restoration Losers: Memory and Tokugawa Supporters in Modern Japan.

Michael has just brought out Samurai, a lively and approachable introduction to the warrior class and its influence on Japan which traces the history of the samurai until their disappearance, and explores their roles in watershed events such as Japan’s invasions of Korea at the close of the sixteenth century. Samurai gives readers access to the real samurai as they lived, fought, and served. It also critiques the role of the samurai in media and pop culture, dispelling many myths along the way.

Samurai are everywhere. From company names to soldier training programs, and of course gaming, manga, and anime. Not that I’m one to bemoan this situation, students take Japanese history courses not because they’re interested in business, as they did during the 1980s, China-related courses have picked up that audience, but for the immense influence Japanese popular culture has on the West. Manga is now a genre section in Barnes & Noble, and young people know better than to pronounce it like the Italian word mangia as many in my parent’s generation did.

Nonetheless, every semester I have a student who comes up to me after class to tell me that I have killed their childhood fantasies about samurai and ninja. I sympathize a bit with my graduate school advisor’s generation, scholars in their 70s, who often view student enthusiasm for Japanese pop culture with suspicion.

So that brings me to samurai myths. Westerners are consuming Japan in pop culture now more than ever before, and while much of it is well-researched and depicts accurate details of this warlord or that battle, some myths die hard. Here are my top three samurai myths, in no particular order.

Loyalty and honor
There is this notion, based on some historical evidence, that samurai were always prepared to die for their lords. There are famous incidents throughout the medieval period, roughly from the 9th to the early 16th centuries, if the stories are to be believed, of famous warriors who killed themselves upon the death of their lord, a practice called junshi, or, in general, refused to betray or abandon their lord in defeat. While it happened occasionally, most of the time warriors simply worked for a new lord or pursued other livelihoods if their lord was killed. As I emphasize to students, warlords were often more worried about their own relatives or men from within their warrior networks, than they were about rivals or neighboring warlords.

Notions of death before dishonor, loyalty to a lord or, more likely, his clan, was a feature of the early modern period, from the 17th to the 19th centuries, when warriors, preoccupied with bureaucratic drudgery, idealized the warriors of the past.  A wandering samurai who had no lord was called a ronin. The most famous case of loyalty was the 47 ronin incident, when a group of warriors chose to avenge their lord’s death after he was executed for attacking a senior warrior during a ceremony at the shogun’s castle. While everyone focuses on the actions of those 47 ronin, what is neglected is the many other samurai from the same domain who chose not to “avenge” their lord. And it clearly was not a case of avenging; their lord was executed not defeated in battle. At any rate, this was a controversial event at best, with warrior pundits either praising or, more often, criticizing their actions. Nonetheless, it eventually became romanticized by non-warriors in art, kabuki and puppet theater, and later, television and film.

Death before dishonor and loyalty became key concepts in 20th century wartime propaganda. Even after the War, loyalty to a company before one’s own well-being justified overworking white-collar workers, leading to a phenomenon condition called karoshi (death from overwork).

Samurai swords
There are two common myths about samurai swords. The first is that they were the “soul of the samurai.” Well, no. For much of Japanese history swords were a sidearm, and like soldiers today, they did not go into battle using, primarily, their sidearm. The bow and arrow dominated much warrior-on-warrior combat, leaving large swords, larger than those typically seen in museums and in popular culture, which were a later invention, for pure blunt force trauma, or to decapitate fallen enemies - gathering heads was a way to accrue awards for service.

During the Tokugawa period, roughly 1600-1868, swords became a marker of warrior status, but even non-warriors could carry them if they had special permission from local warrior government. Such cases include working on behalf of a lord, temporarily granting permission to wear a sword while on duty, or as a long-term privilege for elite commoners like village mayors and rural entrepreneurs who might increase the tax base for a local lord.

At least one trend from the mid-17th century gives us insight into warrior attitudes towards their swords. In the capitol city Edo, now Tokyo, warriors liked having their swords straightened. This made their swords appear extra-long and the look became fashionable. Samurai displayed their straightened swords especially when on processions accompanying their lords throughout the streets of Edo. The trend was so popular that prices for regularly curved swords plummeted, and sword smiths were asked to straighten blades that had been family heirlooms. The Tokugawa shogunate, ruler supreme in Edo and Japan’s de facto government, would have none of it - straightened swords were impossible to draw quickly and nearly useless in combat. Even if many samurai cared little about martial effectiveness, the shogunate would not allow them to be a completely empty symbol.

Samurai were feared and respected
First, during the high point of samurai salience in Japan, the Tokugawa period, they never made up more than about seven percent of the population nationally, and although samurai were a common sight in large cities like Edo, Kyoto, or Osaka, they were less common in the countryside. Theoretically a samurai could cut down a commoner, or even a low-ranking pseudo warrior who offended him in some grave way, a practice called kiritsuke-gomen. He could also kill his wife if she had an affair. But the reality is that this rarely happened. Tokugawa-era writers, artists, and playwrights, many of them samurai, often poked fun at warriors and the putative warrior ethos. Musui’s Story is an excellent autobiography about how desperate rank and file warriors could become, and why commoners might not respect them.

After the Tokugawa regime fell in 1868, the fledgling Meiji government abolished the samurai as a social class, turning them into a group known as shizoku, a title that granted no privileges or markers of status. Many warriors were more than happy to abandon their status in order to pursue other livelihoods, but others violently resisted the loss of privileges, culminating, in 1877, in the War of the Southwest, loosely depicted in the period action movie, The Last Samurai. For a time, many Japanese citizens regarded samurai as an anachronism, if they regarded them at all, and only later with some nostalgic pride in the nation.

Details: Samurai is published by Oxford University Press in hardback and eBook, priced in local currencies.
Posted by Rosie Milne at 10:59