What aroused your interest in translation, and what was the first piece you ever translated?

My journey to literary translation began as an academic interest. As a doctoral student reading comparative literature at the University of Warwick, I was supervised by Susan Bassnett, a household name in translation theory. So, while my thesis wasn’t directly about translation, I began to explore this field of study first through conversations with her. Today, I continue to research into translation to unveil its multifaceted role at shaping what scholars call ‘world literature’. As an indication of just how complicated translation can get, I’ve published a comparative analysis of the Bahasa Melayu and Bahasa Indonesia versions of Syed Hussein Alatas’ seminal book The Myth of the Lazy Native and found that the former sharpens the ethnic divide between Malays and Chinese in line with the Malaysian ruling party’s (UMNO) ideology of ketuanan Melayu (Malay supremacy). This affirms the proposal that translation is mired in practices of patronage and power as the translation theorist André Lefevere had pointed out in his book Translation, Rewriting and the Manipulation of Literary Fame. This was one of my earliest academic essays. It’d convinced me to dive deeper into translation research.

After my studies in 2013, I returned to Singapore. This was when my first foray into literary translation as practice began. Then, literary translation was starting to gain traction in my multilingual city-island, though there'd been attempts in the past. I was invited to deliver a public lecture about translation, and I was excited to share what I’ve learnt with others. After the lecture, I was approached by the playwright Nadiputra, a Cultural Medallion winner in Singapore, to translate a musical that he was writing from Bahasa to English. I said yes, and the result was a bilingual publication titled Muzika Lorong Buang Kok (Lorong Buang Kok: The Musical), a play about the last kampong (village) in urban Singapore. I’ve found the process to be nothing short of cathartic. Embodying first-hand some of the challenges I’ve read about made the practice of translation even more complex than I've imagined, and this made it alluring – an enigma that’s inviting me to explore its depths. Today, I’ve translated short stories and poems, surtitles for a theatrical adaptation of Anthony Burgess' A Clockwork Orange, subtitles for a 1960 black-and-white Malay movie as well as judged a translation contest. Most recently, I partook in a performance-lecture about my process as a literary translator.

Sandeep Ray talks about his cinematic and deeply resonant historical novel, A Flutter in the Colony

Sandeep Ray was born off the Straits of Malacca and spent his childhood next to a remote rubber plantation. He has lived in Kolkata, Massachusetts, and Jakarta. His first career was in filmmaking, working for various documentary companies based in the United States, often traveling to and in Asia. His last feature-length film, The Sound of Old Rooms (2011), was screened at many international forums and won the Grand Prize at the Taiwan International Documentary Film Festival. In recent years, after completing a doctoral degree in history, he has taught at the University of Wisconsin and at Rice University, researching and teaching about the late-colonial period in Southeast Asia. He currently lives in Singapore and is a Senior Lecturer at the Singapore University of Technology and Design. His next book, forthcoming from NUS Press in 2021 is titled, Celluloid Colony: How the Dutch Framed the Indonesian Archipelago.

In 1956, the Senguptas travel from Calcutta to rural Malaya to start afresh. In their new hamlet of anonymity, the couple gradually forget past troubles and form new ties. But this second home is not entirely free and gentle. A complex, racially charged society, it is on the brink of independence even as communist insurgents hover on the periphery. How much should a newcomer meddle before it starts to destroy him? Shuttling in time and temper across the Indian Ocean, A Flutter in the Colony is a tender, resonant chronicle of a family struggling to remain together in the twilight of Empire in Asia. 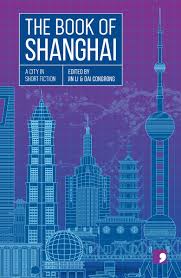 The Book of Shanghai  published in the UK in partnership with the Confucius Institute, which promotes Chinese language and culture worldwide, is the latest addition to Comma’s Press' award-winning Reading the City series.

All the stories have been sensitively translated into English by a top-notch team of translators including Helen Wang, Yu Yan Chen and Fran Nichols.

Stories range from crime thrillers, to historical dramas set over the past 50 years, from comedic interludes, to sci-fi visions of the future. Collectively, they offer an insight into the cultures, customs and social make-up of Shanghai, the city long-heralded as the cultural capital of China, and one where Eastern and Western cultures converge.

Stephanie Chan aka Stephanie Dogfoot talks about her stirring collection Roadkill for Beginners, slam poetry, and her different performing hats.

Stephanie Chan’s poetry has been described as “conjuring a kind of matter-of-fact magic, full of warm, everyday rhythms and rhymes – aspects of life exaggerated or distilled to their most joyous, beautiful and/or ridiculous.” A former national poetry slam champion in Singapore and the UK, Stephanie currently produces poetry and stand up comedy nights in Singapore. She has been invited to perform on stages across five continents, including the Glastonbury Festival, Ubud Writer’s and Readers’ Festival and the George Town Literary Festival and has toured Australia, Germany and North America with her poetry.

Roadkill for Beginners is Stephanie Chan’s first collection of poetry. It’s part scrapbook of love letters to places, part field guide to the people in them. It’s a messy celebration of open mics, bonfires, and poetry stages around the world, the connections that grow up around them and the adventures that happen after. It explores desire, moving, belonging, and everything in between. It’s got apocalyptic hawker centres, magical night bus rides, and hungry turkey vultures. It’s about growing up, and not. For you, it hopes to feel like the lyrical equivalent of spooning in strange buildings then flying at full speed down a steep empty road on a bike at two in the morning.

Talented Ivy Ngeow dishes on her recent book Overboard: research, characters and the time it took to write her book

Bio
Ivy Ngeow was born and raised in Johor Bahru, Malaysia. She is the author of three novels, Cry of the Flying Rhino (2017), Heart of Glass (2018) and Overboard (2020). A graduate of the Middlesex University Writing MA programme, Ivy won the 2005 Middlesex University Literary Prize and the 2016 International Proverse Prize. She has written non-fiction for Marie Claire, The Star, The New Straits Times, South London Society of Architects’ Newsletter and Wimbledon magazine. Her short stories have appeared in Silverfish New Writing anthologies twice, The New Writer and on the BBC World Service, Fixi Novo’s ‘Hungry in Ipoh’ anthology (2014) and 2020 anthology.


Synopsis
Thailand. An epic storm. A shipwreck. A white man has been found. Alive.

But who is he? Suffering horrific injuries and burns, he is taken to a local hospital. He is mute. Everything is a blank. They tell him his name. That is all he knows. When his Chinese wife arrives, he has no choice but to return to London to her family. He starts getting better with care and more surgery until one day… he’s assaulted. And he knows why. The blow brings back a dangerous memory. But he’s crippled, disfigured and penniless… and he’s living the life of the man they think he is.  What will he risk to uncover the truth?
Read more »
Posted by E.P. Chiew at 07:32 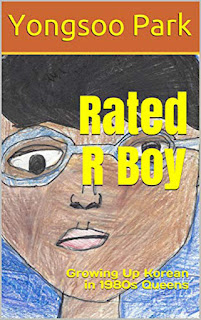 Yongsoo Park is the author of the novels Boy Genius and Las Cucarachas, as well as the essay collection The Art of Eating Bitter: A Hausfrau Dad’s Journey with Kids, about his one-man crusade to give his children an analog childhood. Born in Seoul, he grew up in NYC. Boy Genius was a Notable Title Selection for the 2002 Kiriyama Prize, and Las Cucarachas was a finalist for the Asian American Literary Award.

Rated R Boy Life is a memoir about how life in NYC wasn’t what Yongsoo envisioned it to be when his family moved there from Seoul in the summer of 1980. The streets are filled with homeless people. The subway is covered in graffiti. Older kids on his block push him around and force him to do things he doesn’t want to do. But the biggest legacy of such a move, of course, was that for the rest of their lives, he and his family were haunted by doubt and longing for what they’d left behind and what might have been.

Osprey Publishing has become synonymous (in my mind at least) for quality research into military history of all time periods, throughout the world. It should come as no surprise that I immediately picked up Osprey's latest title Japanese Armies 1868 - 1877 by Gabriele Esposito and illustrated by Giuseppe Rave, which covers the Boshin War and Satsuma Rebellion. 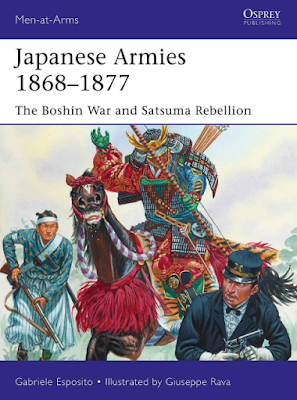 Polymath Desmond Kon talks about his near-death experience, religion and philosophy & writing in The Good Day I Died 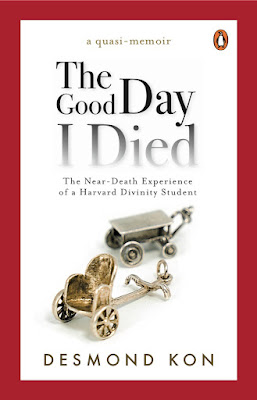 He can be found at: www.desmondkon.com

In 2007, Desmond Kon died, and came back to life. This is better understood as a near-death experience (NDE). Fresh from studying world religions at Harvard, Desmond’s NDE shared remarkable consistency with other documented NDE accounts, such as encountering otherworldly beings, altered time-space realms, and the classic tunnel of light. Post-NDE symptoms included paranormal sightings. How did Desmond make meaning of his NDE given his academic background in world religions? He even took a class on angelology—how then did he perceive the angelic beings he encountered? Framed as a quasi-memoir, The Good Day I Died is constructed as a self-administered interview, allowing the account its moments of deep intimation. Moving beyond the current literature’s attempts at legitimizing the NDE, The Good Day I Died weaves in excerpts of Desmond’s literary oeuvre, which help shed light on the indelible impact of his NDE. This book represents Desmond’s most confessional writing yet, relating the story of his death, and his transformed life after his return.

Lockdown for so many of us may (and I emphasise ‘may’) mean a chance to get to that tottering tsundoku at last. Also plenty of booksellers are still managing to find innovative ways to get books to people – online of course, but also by hand, kerbside pick-up, partnering with food delivery apps and so on. So there’s no excuse!! So here is this month’s springtime shelf-isolation (geddit!!) tsundoku column. As ever, some fiction first...