What aroused your interest in translation, and what was the first piece you ever translated?

My journey to literary translation began as an academic interest. As a doctoral student reading comparative literature at the University of Warwick, I was supervised by Susan Bassnett, a household name in translation theory. So, while my thesis wasn’t directly about translation, I began to explore this field of study first through conversations with her. Today, I continue to research into translation to unveil its multifaceted role at shaping what scholars call ‘world literature’. As an indication of just how complicated translation can get, I’ve published a comparative analysis of the Bahasa Melayu and Bahasa Indonesia versions of Syed Hussein Alatas’ seminal book The Myth of the Lazy Native and found that the former sharpens the ethnic divide between Malays and Chinese in line with the Malaysian ruling party’s (UMNO) ideology of ketuanan Melayu (Malay supremacy). This affirms the proposal that translation is mired in practices of patronage and power as the translation theorist André Lefevere had pointed out in his book Translation, Rewriting and the Manipulation of Literary Fame. This was one of my earliest academic essays. It’d convinced me to dive deeper into translation research.

After my studies in 2013, I returned to Singapore. This was when my first foray into literary translation as practice began. Then, literary translation was starting to gain traction in my multilingual city-island, though there'd been attempts in the past. I was invited to deliver a public lecture about translation, and I was excited to share what I’ve learnt with others. After the lecture, I was approached by the playwright Nadiputra, a Cultural Medallion winner in Singapore, to translate a musical that he was writing from Bahasa to English. I said yes, and the result was a bilingual publication titled Muzika Lorong Buang Kok (Lorong Buang Kok: The Musical), a play about the last kampong (village) in urban Singapore. I’ve found the process to be nothing short of cathartic. Embodying first-hand some of the challenges I’ve read about made the practice of translation even more complex than I've imagined, and this made it alluring – an enigma that’s inviting me to explore its depths. Today, I’ve translated short stories and poems, surtitles for a theatrical adaptation of Anthony Burgess' A Clockwork Orange, subtitles for a 1960 black-and-white Malay movie as well as judged a translation contest. Most recently, I partook in a performance-lecture about my process as a literary translator.

Who are the most exciting writers in Bahasa Melayu today?

I’m glad you've asked this. I want to preface my answer by saying that literary works from the Malay world – encompassing the modern nation-states of Malaysia, Singapore, Brunei and Indonesia – are not well-read outside of their own jurisdiction. That said, my favourite contemporary author is Eka Kurniawan. While he’s been described as the next Marquez, I think he’s charting his own path, drawing on local folklore and narrative styles rather than blindly mimicking Marquez’s style. But, Eka’s already making his mark in literary circles given that his novel Man Tiger was longlisted for the 2016 Man Booker International Prize.

So I’d like to bring out some works by other talented authors. At the moment, I’m taken by the writings of Farihan Bahron, a poet and author on the rise in Singapore. I’m in the process of translating some of his works for an anthology, and I’ve found it challenging to mimic the rhyme and rhythm of his flowery prose. I hope to bring justice to his writings for the wider world soon. Speaking of aesthetics, I’ve also found the work of Indonesian author Nukila Amal to be beautiful in the original. I’m in the midst of reading her novel Cala Ibi which has been translated as The Original Dream by Linda Owens for Amazon Crossing. The most exciting writer from Malaysia is the prolific Faisal Tehrani whose maverick and erudite novels have often been banned. The Professor is his latest translated work, and would appeal to anyone interested in the clash of liberal and conservative values in Malaysia. You can tell that I’m a fan of contemporary writing especially if these are works that experiment with forms yet speak to current affairs.

In one of your interviews, you say, “It is important to note that a translator does not need to agree with everything the author whom s/he translates.” Could you give us an example of something that you translated that you disagreed with?

It is precisely this concern that my artistic collaborators (Nabilah Said and Adib Kosnan) and I wanted to explore in-depth through the format of a performance-lecture that I’ve mentioned earlier. Titled Rasa Sarang, this performance-lecture was based on my experience translating a short story written by Mohamed Latiff Mohamed, one of Singapore’s most renowned Malay authors, for his short story collection, Lost Nostalgia. Composed about four decades ago, the story recounts a whirlwind love affair between a Malay man and a Korean woman in Seoul. While translating this story, I was troubled by what I saw as reductive renderings of two things – the female figure and a foreign culture. Yet, I also know the author as a stand-up person, a literary father-figure, who is concerned about the plights of the downtrodden in society. It’s highly likely that he wasn’t trying to be exploitative, that he was a man of his time. My experience with Malay prose of the 1980s is that very little of them account for ‘intersectionality’ or ‘gender performativity’ even when they were written by a female author. My publisher and I had discussed the possibility of removing this story from the collection, but we eventually decided against it because this accounts as censorship. I’ve decided then to make minor tweaks to the story that would give it some measure of satire. The clearest instance of this was its title. Instead of literally translating it to ‘The Love of a Korean Woman’, I’ve decided to call it ‘K-Love’ which feeds into the hallyu craze of K-pop and K-dramas. I imagine that the title alone would give pause to someone familiar with Bahasa to think through some of the word and phrasing choices I’ve made in the text. Hopefully, that reader will revisit the original to compare. And if the reader has no knowledge of Bahasa, then I’m hoping that the title would signal to them that the story may be satirical. And that they could still enjoy reading it. I’m still on the fence as to whether this was the best decision but it represented what I thought was the best move to not censor the author while still addressing my unease as a translator. In the interest of transparency, I felt that it's important to relate what I did to the readers, and I did this through my translator’s afterword. I much prefer writing an afterword than a foreword because this lowers the chances of influencing the way a text is read.

In a fascinating conversation you had with Susan Basnett, she gives a very interesting example of mutually incompatible styles, and the challenges that they pose to translators. Are stylistic differences a problem when translating from Bahasa Melayu to English?

The differences between languages are riveting to me. True to the Sapir-Whorf hypothesis which has it that the languages you speak influence the way you think, I’ve found that the Arabic language, which I’m currently learning, is more mathematical in structure than Bahasa or English. Let me revisit some examples from ‘K-Love’ to demonstrate stylistic differences between Bahasa and English. You’ll find that there’s some truth here to Basnett’s observation that British English understates, and I’ve used this feature to satirise the short story. A scene in the story describes the male protagonist Yadi fantasising about his crush Hyun-soo, a Korean woman, one night in his hotel room. The line reads: “Alangkah manisnya jika tubuhnya dapat dibaluti oleh kain kebaya dan kain songket”. Literally, it should read something like: “How sweet it would be if her body was enveloped in kebaya and songket”. Instead, this was what I did: “You would look so sweet in kebaya and songket”. A Bahasa reader might think that there appears to be a terseness, even cold distance, in the English translation. In terms of aesthetics, the original Bahasa sentence sounds much more florid. But I’ve decided to downplay it as my way of silently protesting, even distancing myself from the assumptions within the sentence. Another stylistic difference between the two languages concerns idioms and metaphors. In this same story, the author Mohamed Latiff uses the word ‘sembilu’ to describe Hyun-soo’s reaction to Yadi staring intensely at her. In Malay, the word ‘sembilu’ means ‘a sharp pain’ though its use often denotes a welcoming kind of intensity, and this is the meaning that Mohamed Latiff was probably going for in the context of this story. Translated into English, though, the word vaguely suggests that the stare is disturbing, and I’ve left it at that. This accounts for another instance of how I’ve articulated my unease.

Anything you’d like to add about any translation projects you are currently working on?

I’m excited about the two translation projects I’m working on this year. The first is a late nineteenth century Malay epic poem whose title I shouldn’t reveal yet. I would say that this has been a challenging task because I’m attempting to retain some semblance of the strict rhyme pattern of the pantun style. Most translations of old epic poems aren’t as concerned about rhyme and rhythm. I see this as my humble contribution to introduce a piece of classical Malay work to the wider world. I’m also editing an English short story collection of Malay science fiction from Singapore that'll also feature some stories that I’ve translated from Bahasa, including some works by Farihan Bahron. I see this volume as an important intervention to the state of race relations in Singapore because one of the things I hope to achieve here is to challenge the view that the ethnic minority Malays aren’t scientific or futuristic in their outlook, an unfortunate stereotype that’s inherited from the British and Dutch colonisation of the Malay Archipelago. The idea of the lazy native. Lastly, my plan next year is to translate a novel from a notable Malaysian author. This too is thrilling and I’m currently at the early stage of exploring possibilities. 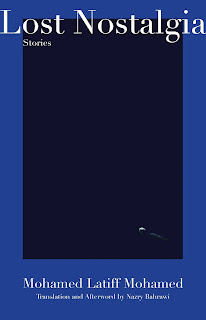