Japan's Greatest Victory, Britain's Worst Defeat - A Memoir of the Battle of Singapore

It’s often said “history is written by the victors,” and this only half true. While the narrative of World War II is definitely constructed from the Allied lens, this does not mean that the vanquished were unable to tell their stories. German officers and soldiers pumped out volumes of memoirs during the postwar years, many of which were consumed voraciously by readers in America and Britain. Japanese memoirs were more sparse, at least regarding translations that made it to the West. One notable exception was Masanobu Tsuji’s memoir Japan’s Greatest Victory, Britain’s Worst Defeat. 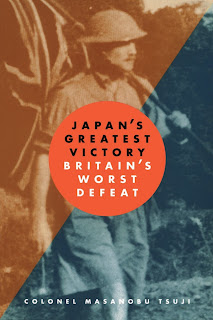 Originally published in English as Singapore – The Japanese Version, Tsuji wrote the memoir to refute many inaccuracies of the Malaya and Singapore campaign. Indeed, he opens with a quote from Churchill’s The Hinge of Fate, which states Japan had long prepared for an invasion of Singapore. Tsuji refutes this, emphasizing that their plans were extremely rushed, and he only began working on it while stationed in occupied Taiwan in January 1941.

The first few chapters are about the internal politics and preparation that the Japanese Empire underwent throughout the months of 1941. I found these particularly interesting since I like that sort of intrigue, but it also demonstrates how unprepared Japan was for war, even toward the end of the year. Tsuji outlines the factional fight between the “Strike North” and “Strike South” proponents, i.e. invade Siberia or invade Southeast Asia.

Tsuji was initially very much in the “Strike North” faction and even had a hand in creating the Nomonhan Incident, which was a small Soviet-Japanese War in 1939. This experience shattered his preconceived notions and shifted his sympathies to the “Strike South” camp. As such, he began throwing all his efforts into planning the campaign that would define him, and his superior, General Tomoyuki Yamashita. At the time, Tsuji was a lieutenant-colonel and became chief of operations for the invasion force, earning the nickname the “God of Operations.”

The majority of the book is dedicated to Tsuji explaining the overall strategy of the Malayan campaign, along with the numerous battles throughout. The first fighting was actually between Japanese and Thai forces. The Thai Army capitulated after only five hours, and Thailand concluded a hasty alliance with Japan, allowing them to invade Malaya more easily. Tactics upon tactics are elaborated on, going into detail about the specific engagements during the campaign. One story that stood out was about the Imperial Guard, an elite unit that hadn’t seen combat since the Russo-Japanese War, proving themselves on the field of battle.

The book also includes a full reproduction of Tsuji’s infamous pamphlet distributed to Japanese soldiers to encourage their fighting spirit, by suggesting they envision the enemy as the man who murdered their father, and that they were coming to take righteous vengeance upon him. A lay reader might find these intricacies and details tediously boring, but it kept my attention throughout. Tsuji is not an emotional writer, but the scale of the subject matter lends it more weight and importance than the prose would convey.

It is important to shine the spotlight on the author himself. Masanobu Tsuji is a complex character, both sinister and fascinating. Although a brilliant strategist, he had a fascist side to him, much more so than other Japanese Army officers at the time. After the war, Tsuji served in the Diet briefly and worked for the CIA who described him as “the type of man who given the chance, would start World War III without any misgivings.” A lifetime of intrigue and suspicion eventually led him to Laos, where he disappeared in 1961. Some say he became a military adviser to North Vietnam, or he was killed in the Laotian Civil War, or that he was eaten by a tiger.

Although these details aren’t mentioned in his memoirs, some of his dubious actions include burning down a geisha house to protest its decadence, informing on conspirators in the so-called November Incident of 1934, escalating the aforementioned Nomonhan Incident, and eating the liver of a downed American airman in Burma, circa 1944. He also had a questionable involvement in the infamous Bataan Death March after the Singapore campaign, and completely misread the inevitable defeat of Japanese forces during the Battle of Guadalcanal (though he eventually supported withdrawal).

If anything, Malaya and Singapore were his only real successes (in no small part thanks to General Yamashita) but they were towering victories, changing the course of world history forever. Military enthusiasts are the target audience for this book, but it should be required reading for anyone interested in World War II in the Far East. It ends with the British surrender at Singapore, but it includes this exchange with Tsuji and a captured British officer.

“Don’t you believe Britain is beaten in this war?” Tsuji asked.

The British officer replied, “We may be defeated ninety-nine times, but in the last round, we will be all right – we will win that.”