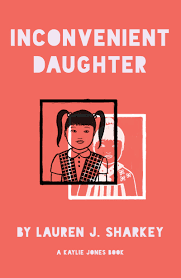 Lauren J. Sharkey is a writer, teacher, and transracial adoptee. After her birth in South Korea, she was adopted by Irish Catholic parents and raised on Long Island. Sharkey holds an MFA in Creative Writing & Literature, and her creative nonfiction has appeared in the Asian American Feminist Collective’s digital storytelling project, First Times, as well as several anthologies including I Am Strength! and Women under Scrutiny.

Inconvenient Daughter, Lauren's debut novel, explores the questions surrounding transracial adoption, the ties that bind, and what it means to belong.

Rowan Kelly, knows she’s lucky. After all, if she hadn’t been adopted she could have spent her days in a rice paddy, or a windowless warehouse assembling iPhones — they make iPhones in Korea, right? Either way, slowly dying of boredom on Long Island is surely better than the alternative. According to her parents, being adopted means Rowan is “special”; but when she’s sent to kindergarten at an all-white Catholic girls’ school, she realizes that “special” means “different,” and not in a good way. It occurs to her that she’ll never know if she has her mother’s eyes, or if she’d be in America at all, had her adoptive parents been able to conceive. Rowan imagines herself the store-brand version of groceries you reluctantly place in your shopping cart when you can't find the expensive brand you really want. Rowan sets out to prove that she can be someone’s first choice; that she isn’t just a consolation prize. After running away from home and ending up beaten, barefoot, and topless on a Pennsylvania street courtesy of Bad Boy Number One, Rowan attaches herself to Never-Going-to-Commit. When that doesn’t work out, she fully abandons self-respect and begins browsing personal ads online. But as Rowan dives deeper and deeper into the world of casual encounters with strangers, she discovers what she’s really looking for.

Lauren here talks about how her own experiences influenced her novel.

My Irish Catholic parents raised me in the suburbs of Long Island. Aside from my brother, the only places I found people like me were at the nail salon, the dry cleaners, or the Chinese take-out place we ordered from on Friday nights. Yet, despite sharing similar complexions, hair texture, and eye shape, they somehow knew I wasn’t one of them.

When I got to college, I made my first Asian friend, Loan. She laughed when I told her I was Korean and said, “You’re not Korean – you’re a Twinkie: yellow on the outside, white on the inside.” She wasn’t wrong. After all, I didn’t speak Korean, I had never had Korean food, and if I was being really honest I wasn’t sure where Korea actually was on a map. In fact, it seemed I knew absolutely nothing about Korea except it was where I had spent the first three months of my life before coming to the United States. And so, telling people I was Korean started to make me feel like an imposter – like I was making a claim to a culture and an identity I had no right to. Rowan Kelly, the young woman we follow in Inconvenient Daughter, shares this dilemma.

Rowan and I share a number of feelings and experiences: a feeling of displacement following our relinquishment; an ability to fall hard for unavailable men; a love for 1990s pop hits. But I’m not Rowan, and Rowan isn’t me. That being said, there was one aspect of my life that was central to developing Rowan as a character: how not seeing myself reflected in the faces of the people who raised me, and by how the world, in turn, viewed me as an Asian American, shaped my understanding of myself.

Growing up in a predominantly white neighborhood, and, by proxy, a predominantly white school system, I was the only Asian kid pretty much anywhere I went. The people I met and became friends with seemed to have all these ideas about who I was and what I was capable of. Students wanted to sit next to me during math exams, boys teased me when I got my learner’s permit, girlfriends would ask me for tips on how cut their cuticles. But the truth was I sucked at math, my dad taught me how to drive and parallel park in Queens, and I rarely cut my own cuticles.

The question most people want answers to is “have you ever thought about finding your real family?”. What they’re really asking is if I’ve already found them. They want to hear about the journey I went through to seek them out, if I cried when I met my biological mother for the first time, and whether we go to get mani-pedis to make up for the years we lost.

The sad truth is I’ve never been curious. Now, however, in my mid-thirties, I am perilously close to the magic number that would place me in the geriatric pregnancy category. Indeed, I am expected to be thinking about becoming pregnant. More than that, I am expected to do right by my maybe-baby. So, I couldn’t help but feel that a DNA panel could help determine whether my genetics were good enough to have a child.

I was excited when I received an email from the genetics testing and analysis company that my “reports” were ready. But as I scanned the reports, I realized I didn’t understand enough about Asian history to know if it mattered that I was 2.5% Chinese and 7.2% Japanese. I didn’t understand the difference between having ancestry in the region of Busan versus Daegu. I still, even with all this data, don’t understand what it means to be Korean.

The most difficult part of growing up as a transracial adoptee was thinking I was alone in my confusion. Immersing myself in the online adoptee community has helped me discover that so many others are not just in the in-between, but learning how to live, thrive, and navigate it. I’m hoping Inconvenient Daughter not only inspires important conversations around adoption, but also serves to let adoptees know they’re not alone, that someone understands, and that it’s time for them to share their stories.