NH: I'm delighted to be interviewing Avery Fischer Udagawa, because I have a huge admiration for translators who focus on young readers. I started by asking her about her latest translation piece in Words Without Borders, and why she wanted to translate it. 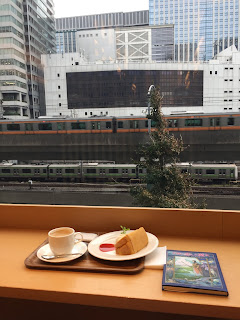 AFU: “Firstclaw” at Words Without Borders is my rendering of 「イチノツメと呼ばれた魔女」 by Sachiko Kashiwaba, a fairy tale from her collection of linked tales, 王様に恋した魔女』 (Kodansha, 2016). I encountered this story on precisely the morning of October 24, 2018, in the large Maruzen Marunouchi bookstore in Tokyo, where I had gone to spend time before a meeting with the author. Since we are all stuck at home these days needing vicarious outings, I’ll share that I savored this book over chiffon cake in Maruzen’s third floor café, glancing out as JR local trains and bullet trains pulled in and out of Tokyo Station. I even exchanged bows with a window washer who floated by in his rigging.

Hours later, Kashiwaba herself signed my book. That was a story scouting day for the ages!
“Firstclaw” struck me as a skillfully wrought, surprising tale of a reclusive witch, a resourceful princess, and a brave king. I found the ending (which I won’t spoil here) curiously joyful, and I chose to translate it out of readerly pleasure. 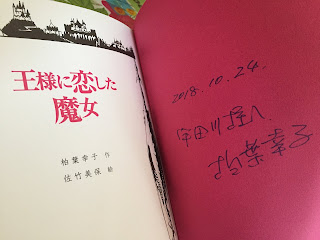 When I submitted my translation last year to Daniel Hahn, guest editor of WWB’s April 2020 issue, I also wondered if “Firstclaw” might contribute to discussions in publishing about authors writing outside their own cultural identities. Ms. Kashiwaba’s oeuvre of fantasy writing includes many works with distinctly Japanese characters—kappa spirits, yuki-onna, shape-shifting raccoon dogs, local gods—but she also writes witches, dragons, vampires, and in “Firstclaw,” a “blond sovereign.” She grew up reading western children’s literature in translation and counts Canadian author Lucy Maud Montgomery’s Chronicles of Avonlea as influential in terms of form. Hahn, for his part, sees a “kinship” with Europe in “Firstclaw” and observes that “the webs of influence in children’s literature are dense and rich.”  Does it matter that “Firstclaw” comes from Japan? Readers may find this question stimulating, but I mostly just hope that the story cheers them up, as it does me.


NH: I'll confess to having much less experience translating children's literature than adult novels, so I'm intrigued by this question: do you think there is an essential difference between the two?

AFU: I don’t think there’s an essential difference at all.
The English-language publishing world categorizes literature as children’s or adult—and as middle grade, young adult, and so on within children’s—largely for marketing purposes and to help booksellers and librarians shelve books. This practice can help to ensure that young readers encounter books appropriate to their developmental level, which no one can argue with. It does, however, sometimes obscure the fact that literature is literature, and much of what sells as children’s literature in fact offers much to adults. The reverse is true, as well. Fiction like Ms. Ice Sandwich by Mieko Kawakami, translated by Louise Heal Kawai, works not only as adult fiction but also as MG and YA.

NH: When you interviewed my friend and translation colleague Helen Wang (who is a whizz at all things kidlit from Chinese), she said, about her translation of Jackal and Wolf by Shen Shixi: "Some of the fighting scenes are quite graphic and intense, but it was the psychological behaviour that I found more disturbing, especially where Flame tests a potential suitor." Have you come across similar dilemmas in translating from Japanese and if so, how did you deal with them?


AFU: Yes, Japanese children’s books do sometimes include elements that might disturb young readers of English, due to culture gaps. For example, children of divorce in Japan often experience the trauma of never living with one parent again, which shows up in children’s books involving divorce. This reality may shock young overseas readers accustomed to traditions of joint custody. I have not dealt with this challenge personally.

Sachiko Kashiwaba’s novel 『帰命寺横丁の夏』, which I am pitching as Temple Alley Summer, includes a nine-year-old whose impoverished father sells her into servitude. While set in a fairy tale section of the book, this character’s plight has historical antecedents in pre-modern Japan, which might make it normal-ish fare for readers of the original. It could trouble some readers of the English, however. As the translator, I would never dream of changing this plot element, but in selecting this book to work on, it mattered to me that it goes on to show the child seeking freedom and agency, ultimately overcoming her past. I believe that English-language publishers will appreciate this aspect, too.

NH: What's the nicest thing a young person has said to you about one of the books you translated.

AFU: “Mom, would you hurry up and translate the next chapter?” (I have two daughters, aged 8 and 12.)

NH: What kind of promotion do you find yourself doing for a finished and published novel? and what do you find is most effective when promoting a children's book?

AFU: When promoting children’s books, it’s key to engage not only young readers, but also adult “gatekeepers” such as parents and educators, who are often the ones actually buying the books. With J-Boys: Kazuo’s World, Tokyo, 1965 by Shogo Oketani—a historical novel set in Tokyo after the 1964 Olympics—I have done school visits to interact with students, talks for the general public, and presentations to teachers and librarians both on- and offline. In several cases, I have had the privilege of co-presenting with the author. Sharing with my Japan- and kidlit-focused colleagues has also been very helpful. I treasure the professional organizations SWET and SCBWI and conferences such as the Asian Festival of Children’s Content.

NH: I can see from your blogs and interviews that you champion Japanese literature for kids, and put a lot of effort into pitching the books you like and finding sources of funding. How do you balance your paid and your done-for-love work?
AFU:
Wouldn’t I love balance! Translating J kidlit into E is my passion, but it is a true labor of love. Even the most decorated member of my field, Cathy Hirano—translator of Hans Christian Andersen Award (“little Nobel”) laureate Nahoko Uehashi, among others—cannot live on what her children’s work pays. (Cathy is also the translator of Marie Kondo’s decluttering books; she coined the English phrase “spark joy” for ときめく.) Less than five percent of children’s books published in the US each year are translations (I believe the UK is similar), compared with 15 percent or more in Japan. There just isn’t enough demand for #worldkidlit in English. Yet.
Meanwhile, I work as native language coordinator at International School Bangkok, a job that I find meaningful in itself, and I have a family. Under Covid-19, this means I facilitate virtual school on weekdays and chip away at work on evenings and weekends. Translation has to take a backseat. I know from experience, however, that this tough patch will make the future chances to translate, promote, and scout books in cafés all the sweeter.

NH: When you have time, what your current projects?

AFU: I am pitching Temple Alley Summer, a middle grade novel that showcases Kashiwaba’s gift for writing fairy tales, Japan-inspired fantasy, and contemporary realism, all in 52,000 engrossing words. A third-grade teacher who read this manuscript emailed me, “I stayed up reading when I should have turned out the light and gone to sleep.” She hopes to add it to her classroom library when it comes out.
For now, that’ll keep me going!