Japanese Destroyer Captain - A Memoir of The Pacific War

Japanese Destroyer Captain is the postwar memoir of Tameichi Hara, a Japanese Navy officer who earned the nickname the “Miracle Captain.” He is one of the only Japanese captains to have survived the entire Pacific War from its beginning in 1941 to its end in 1945. Of the 175 destroyers the Imperial Navy possessed during World War II, 129 were sunk. 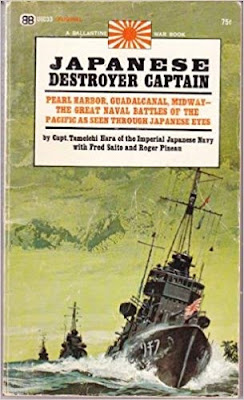 First published in Japan in 1958 under the name When the Imperial Navy Ends, (帝國海軍の最後Teikoku Kaigun no saigo) the book was translated into English in 1961, following the unexpected success of Saburo Sakai’s Samurai! In fact, Fred Saito – co-author of Samurai! – helped with the translation in 1961. Written during a postwar explosion of memoirs, Hara’s book is one of the few Japanese pieces that made it to Western audiences. The Pacific War has always been overshadowed by the war in Europe, and the China-Burma-India Theater is barely ever focused on.

This makes Hara’s book so refreshing. His perspective gives us an insight into the Japanese psyche, specifically the Japanese Navy’s psyche, both before and during World War II. Born into an impoverished samurai family, Hara was accepted into the Navy Academy at Eta Jima in 1918, graduating 40th out of 150 cadets. Hara shares that senior students were often “sadistic brutes” who enjoyed terrifying freshmen. Even long after the war, his bitterness is still apparent.

There has been a tendency, specifically in early postwar accounts of the Pacific War, to portray the Imperial Japanese Navy as a gentlemanly force, opposed to war with the West. By contrast, the Imperial Army is shown as warlike, arrogant, and bloodthirsty. But Hara’s memoir shows that many Navy officers in the 1920s already viewed America as a “potential enemy.” Indeed, there were many prominent Navy officers who pushed for war with Britain and America, whereas many in the Army wanted to strike at the USSR. However, this view of the US as a"potential enemy" is shaken – at least for Hara – after he witnesses the outpouring of American aid to Japan after the 1923 Great Kanto Earthquake.

The impression of the Imperial Navy is less than stellar. According to Captain Hara, its leadership tended to be inflexible and myopic, never predicting what the enemy would do next correctly. Even worse, its strategies and tactics tended to remain rigid, when a more fluid method would have served them better.

He even has some brutal criticism of Admiral Isoroku Yamamoto, who he felt was by in large, incompetent as the Commander-in-Chief of the Combined Fleet. Perhaps hindsight is 20/20, but Hara insists Yamamoto would have made a better Navy Minister and someone like Admiral Yonai (who served several terms as Navy Minister) would have made a better C-in-C. Even more egregious, according to Hara, the admirals who led the Japanese Navy during the disastrous defeat at Leyte Gulf should have been forced to retire. Instead, they were given new commands.

The 1930s was one of upheaval, intrigue, and assassinations in Japan, but for Hara, they mostly passed without much incident. After some minor duty off the Chinese coast during the Sino-Japanese War, where he skippered the destroyer Amagiri, Hara was eventually given command of the destroyer Amatsukaze. It was this ship that Captain Hara took into battle when the Pacific War began. Hara’s first operation was the invasion of the Philippines, but he devotes much more attention to the Battle of the Java Sea in February 1942, a major Japanese sea victory.

Hara’s exploits do not include Pearl Harbor and Midway, but he and his destroyer were heavily involved in the Guadalcanal Campaign, which turned into a grueling six-month land and sea slaughter for the Japanese Army and Navy. In mid-1943, Hara is reassigned to the destroyer Shigure, where he takes part in numerous sea battles around Rabaul in the South Pacific. Against all odds, he and his ship survive.

Hara goes into more detail about the specific tactics and battle plans he used when engaging with the enemy, enough to make any naval warfare enthusiast’s mouth water. In a brief interlude, Hara is assigned to a teaching role for the Japanese Navy at Yokosuka. The fall of Saipan in July 1944 is what convinced Hara that the war was lost. In a strange scheme, he tried to pass along a note addressed to the Emperor, through Hirohito's younger brother, urging him to end the war as soon as possible.

For his – and the Imperial Navy’s – swan song, Hara is ordered into battle one final time aboard the cruiser Yahagi in April 1945, as part of Operation Ten-Go, escorting the giant battleship Yamato. Any World War II buff can tell you what happened next.

An ebook version of Japanese Destroyer Captain can be found on Amazon, and merits reading for anyone interested in World War II-era Japan. There are some issues such as Hara dismissing the Nanking Massacre as being exaggerated and glossing over why Japan went to war in the first place, but Hara’s primary focus was on military matters, which his memoir covers perfectly.