In Indie Spotlight this month, Kazuko Nishimura tells us about her Goddesses of the World series. Historical fiction from Japan with a mythical theme. Over to Kazuko... 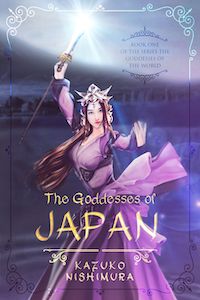 The Goddesses of Japan, is Book One of the Goddesses of World Series.. It is set in Japan and covers the narratives of its Creation to the modernisation in the Nineteenth Century, when the country comes out from the self-imposed seclusion. It is sold on Amazon.


In the week of 22nd October 2019, the international limelight was focused on the ceremony of enthronement of the Emperor Naruhito, (the 126th Emperor of Japan, in the traditional order of succession). Dignitaries of the entire world witnessed the new Emperor ascend to the Chrysanthemum Throne of Japan and the inception of the Reiwa Era, which is a parallel Japanese calendar assigned to the length of an emperor’s reign. This marked the end of the thirty year Heisei Era, precipitated by the abdication of Naruhito’s father and predecessor, Emperor Akihito, due to deteriorating health.

Despite its international profile, what only few people know is that Naruhito  belongs to the legendary Yamato Dynasty – the oldest, continuous hereditary monarchy in the world.

According to the country’s annals, his bloodline has been enthroned in an unbroken succession for over 2,600 years (1,480 confirmed by the official historiography), making their prerogative to the Chrysanthemum Throne unique and incontestable.

Though my book travels way back, starting from the mythological chronicles written in the Eighth Century, tracing and linking Naruhito to the Sun Goddess – Amaterasu, the daughter of the Deities Izanami and Izanagi, the Creators of the country.

Amaterasu fights her siblings for the hegemony over the land and comes out victorious.

The worship of Amaterasu gave origin to the Shinto religion – the indigenous faith of Japan, practiced by 90% of the population.

In the year 660 BCE, Amaterasu’s descendant – Jimmu – founds the country of Japan and self-proclaims its first emperor.

Since the beginning of their rule, the Yamato Imperial House struggles to hold the power. They forge alliances with powerful aristocratic families and warrior clans to survive rivalries and treachery.

In the Sixth Century, Empress Suiko becomes the first woman to sit on the Chrysanthemum Throne and officialises Buddhism the national faith, fostering the country into a period of high and fast progress with technology and knowledge imported mainly from China, via Korea.

Nevertheless, the power of the Imperial House starts to wane in the Twelfth Century due to sheer negligence of the rulers, who don’t realise the country is in deep trouble. Rebellions rise up, crime is rife and disorder engulfs the country.

The inevitable emergence of samurai warriors shoves the emperor to the background and the Shogun becomes the ultimate source of power.

During the Sengoku Jidai (1467 – 1600 CE), the country is immersed in constant civil wars. The sword becomes the law and the land is the currency and measure of power.

Christianity is introduced to Japan and the Europeans plot to take control of the country. To dwarf their ambition, the Shogun resorts to extreme measures and isolates the country from the rest of the world for more than two centuries.

The book is narrated entirely by unsung heroines—goddess, sovereign, mother, wife, warrior, lover—all who enact in the forefront, or move in the background, to influence the fate of the country, changing the fabric of Japan’s society.

Despite its solid historical content, The Goddesses of Japan is packed with romance, valiant battles with mythological monsters, heroic land conquests, family betrayal, sword fight between ninja and samurai to keep the readers entertained and amused.

The book is available at this  Amazon link.