Despite Global Health Warnings, Travellers’ Tales – and Events - Must Continue To be Told and Experienced

Travel is on our mind and in our readings. And while we don’t usually include poets, plays or painters, where there’s a stretched Singapore angle and a very good literary (or publishing) reason, why not.

When Singapore, like dozens of other countries, is being plagued by the nasty coronavirus, which is stopping some people from holding events -  including theatre and book launches -  we must not just revert to shutting ourselves away to read books, but enjoy a play or a reading when we can.

So Singapore theatre goers can still experience a very localised version of Oscar Wilde’s The Importance of Being Earnest (by Wild Rice);  The Lifespan of a Fact – based on an actual event in New York – presented by Singapore Repertory Theatre; then there’s Florian Zeller’s The Son, performed by Pangdemonium. If that’s not enough to go on or go to, there’s National Theatre’s War Horse, based on the novel by Michael Morpurgo, or even more remotely connected is J.B. Priestley’s 1945 drama, An Inspector Calls, being staged by Wild Rice.

Back to books: I missed giving a mention in my last report to Josephine Chia's Queen of the Sky, a children's book reflecting on the real life aviatrix, Amelia Earhart. I discussed this – and other books – with Josephine at the Singapore Writers Festival. As this is her first children’s book, she demonstrates, once again,  her incredible versatility and “way with words”, whatever age they’re aimed at.

We continue with an air travel theme this time, with something old, something nearly new and something not quite blue, but green!

Dipping into my depleted bookcases, I’d hoped to find Diamonds in the Sky, which I reviewed years ago. It's taken off! But I remember it as a wonderful history of air travel told from the passenger's experience and it was published by Bodley Head for BBC following a documentary TV series. It covered the early days of flying from Europe, through the “east”, touching down in Singapore, on the way to Australia. Profusely illustrated, this 240 page book is a treasure for those who are traveling now as well as travel historians. You can still get this book.

Then there’s the poignant story of a small-town boy, who stumbled into a lifelong flying career spanning 38 years as a pilot. Now at 99, Captain Ho Weng Toh, one of the last few remaining Flying Tigers, recalls the many events that shaped his life. Originally from Ipoh (Malaysia), he was one of the pioneering pilots at Malayan Airways, a predecessor to Singapore Airlines. Knowing my aviation bent, the publishers were very wise to send me a review copy. Like most books about pilots and flying, this is amply illustrated.  Wisely and well published by World Scientific.

The very same publishers reminded me to make a note about another book with an aviation theme. Without wallowing in self-promotion, I can tell you about Mr SIA: Fly Past  and include some of my notable notes: “Absorbing the life and work of Lim Chin Beng is like watching a fly past of airlines and aircraft old and new. He was instrumental in taking the very basic components of a business — like a potter taking the clay — and creating what has become one of the world's leading brands.”  Yes, it’s available from good bookstores or online at World Scientific.

Air travel – and travel restrictions due to the global viral spread, plus the campaign called “flight shaming” -  shine a bad light on this form of transportation. But it’s not as bad for the planet as the emissions from millions of petrol-driven cars on the road, believe it or not.

I read again the original Green Travel Guide - from 1999 by Greg Neale and Earthscan – which was an inspiration to many, including us. British Airways helped make this happen. Others are getting on the band-wagon, but this shows who were the green travel pioneers. It is still available in print and online. Get more info & the book here.

When a group of visiting university students from Mexico and the United States asked Singapore Ambassador-at-Large Tommy Koh what was Singapore's secret in its successful evolution, they didn't realise his answer would become a book. Even Tommy didn't think this one would so quickly get to the top of the best-selling non-fiction list in the Straits Times. Read all about it.

Panjang is the tallest kid around. He hates standing out, but little does he know, he's on his way to greater heights. This delightful tale is the youthful and well-illustrated version of a book all about Singapore's second Prime Minister, Goh Chok Tong. Tall Order is the adult's hardcover, also by Shing Huei Peh and published by World Scientific.

From National Library Board's Singapore collection comes a book club with a unique local flavour. There you can discuss books by both well-known and emerging authors touching on topics close to home. Join author Balli Kaur Jaswal at this session to discuss her novel Inheritance.  12 March at 7pm.

It was at a Singapore library talk a couple of years ago when I first met Margaret Heffernan, who was then discussing her current title A Bigger Prize.  We kept in touch and her publishers kindly sent me her latest Uncharted.

Little did she know when she wrote the book to come out this January, that the year would start with out of control and damaging wild-fires in Australia and a menacing global outbreak of a new virus which originated in the Wuhan city wet-markets of China.

While she says we are "addicted to prediction" and "desperate for certainty" about the future, there's no way we can forecast precisely when and where the next disaster will strike.

As for climate change - which she recognises as "real" - there's no way we can predict "when extreme weather events will destroy which harvests". She notes that Apple's iPhone is "designed in California", but it depends on raw materials and suppliers from at least 24 countries - and very reliant on China for a lot. Apple, like many others, could not have forecast the impact the coronavirus outbreak would have on its China supply chain.

The book is full of warnings and wise counsel from Margaret Heffernan - an entrepreneur, CEO, business advisor and TED talker – and it's packed with personalised business case studies, which are not only very well-told, but hit the mark for those of us struggling to come to terms with the past and present, let alone the unfathomable future. Get more from Simon and Schuster.

Just had the chance to catch up with the renowned water colourist (and former advertising man) Graham Byfield, who’s visiting Singapore to work with his publisher on his latest Sketchbook. He spent many years in the tropical island city state working for Batey Ads on prestigious accounts like SIA and the Singapore Tourist Board. 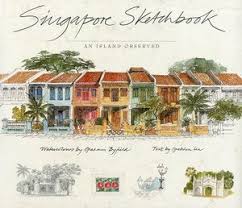 To me, he personifies The Art of Travel. A full-time artist with his own gallery in Menorca (Spain) – the setting for his next coffee table work of art - he travels extensively to research and paint for his books, which include nine Sketchbooks: Bali, Thai Silk, London, Amsterdam, the Bahamas, Oxford, Cambridge and, now, Barcelona. Singapore Sketchbook was the first, published way back in 1995. It’s still a best seller and Graham thinks there could be an updated edition in the near future.   All published in Singapore.

I do enjoy reading the British paper, FT Weekend – which you can easily get in Holland Village every Saturday. The latest issue reviewed Chris Goodall’s newest book, What We Need To Do Now, along with three others in a feature: "How to Heal the Planet". Plenty of positives from this green energy expert, who sees a low emissions future - for the UK and the rest of the world - coming from renewable energy, including hydrogen, for transport, industry and buildings. Go here for more.

Sustainable events and responsible travel - like energy efficiency and clean air on the track and road - make their mark in this 2013 book, as do a host of other important subjects. It's full of case studies, profiles and commentary on Sustainable trends in Asia Pacific. Yes, it’s another one I take credit for and it’s also published by World Scientific.  Read all about it and buy here. 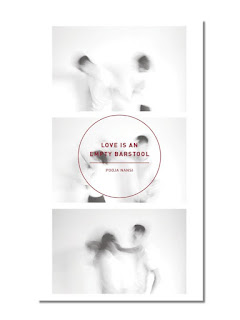 Taking a very different slant is one of Singapore’s better known poets, Pooja Nansi – perhaps even better known for managing last year’s very successful Singapore Writers’ Festival. You can catch her doing a reading from her collection Love is an Empty Barstool (published by Math Paper Press) and at Books Actually on Sunday 1 March at 2pm. Pooja is joined by novelist Anittha Thanabalan, to discuss her latest The Lights That Find us.

Another event to remind you all about is the Sing Lit Power House at Pasir Panjang. 6-7 March.  Let’s hope the organisers don’t’ succumb to the “cancellation bug”!

Is this enough to grab your attention and attendance? “Presented in and around Pasir Panjang Power Station, An Exercise in Noticing leads audiences on a personal contemplative passage through a journey of Singapore literature.”  There’s more to learn here and to register.
Posted by Ken Hickson at 13:21