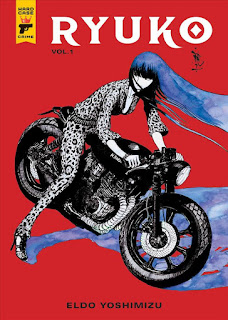 As this is my first blog post as a regular contributor, I thought I’d change it up from my other articles – Researching Historical Japan & Researching Old Shanghai. I will continue to write about Asian history, but for now, I’d like to talk about a piece of contemporary Japanese fiction.

Ryuko by Eldo Yoshimizu is a manga about espionage, crime, and war, topped off with a Japanese pulp aesthetic. With dark and fluid artwork, you see the story of Ryuko (whose name I assume means 'dragon child'), the daughter of Black Dragon yakuza gang. Ryuko has deep ties to the Kingdom of Forossyah, a fictional country on the Black Sea, even going so far as to raise the King’s daughter when he is deposed in a military coup d’état. Years later, Ryuko settles the score with the traitorous general who led the coup and also discovers her long-dead mother is still alive.

Ryuko returns to Japan, where she is searching for Mr. Ikeuchi, head of the Yajima Gang, a rival yakuza boss of her father – Garyu. Ikeuchi – as it turns out – might hold the key to the whereabouts to Ryuko’s presumed dead mother, but that information won’t come easy. Turns out that Ikeuchi used to serve under Garyu, but resentment and ambition got the better of him. Kidnapping Ryuko’s mother – Shoryuhi – he kicked Garyu out of Japan, where he set up shop on Forossyah. He’s been paying the Yajima Gang for years, which Ryuko thinks are mere tributary payments, are actually part of a sizeable hostage payment for Shoryuhi.

The narrative is told through several flashbacks and side characters. One of these is Tatiana, a Russian expat living in Japan. A former ballerina, Tatian’s life was ruined when her father – Major Matvey Pavlov – was died in Afghanistan with “dishonor.” Her life in shambles, Tatian becomes a dancer in Japan, where she meets up with Nikolai, a member of her father’s old unit in Afghanistan. We then travel back to the 1980s during the Soviet-Afghan War, where Tatiana’s father and Nikolai are in a losing battle against the Afghan Mujahideen.

Realizing the war is lost and that the Soviet Union itself is on the brink of collapse, Major Pavlov hatches a plan to obtain Afghan opium for drugs. Complicating this is a major raid on their position by the Mujahadeen. It turns out that Garyu and a pint-sized Ryuko are in Afghanistan, supporting the Mujahadeen in their war against the Soviets. This comes as an unexpected twist and might have a larger role in the story in volume 2.

Although it’s a modern story, Ryuko has the vibe of a 70s manga in the vein of Lady Snowblood, by the legendary artist Kazuo Koike - meaning that it’s pulpy, raw, and a little sleazy. There also seems to be traces of Japanese exploitation movies from the 1970s in the aesthetic, specifically the Female Prisoner Scorpion series starring the indomitable Meiko Kaji. So much so, that Ryuko is seen wearing Meiko Kaji’s iconic black coat and wide-brimmed hat.

Ryuko by Eldo Yoshimizu should please fans of manga, crime fiction, war stories, and intrigue, and is available for purchase through Amazon. Volume 2 will be out in October, which should end the story.