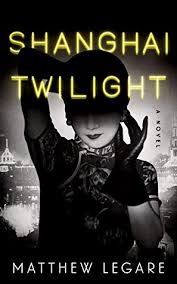 Matthew Legare is the author of the Reiko / Inspector Aizawa historical thrillers set in pre-World War II Japan, and published by Black Mist Books. His latest novel is set in 1930s Shanghai. In this companion piece to his previous post on researching historical Japan, Matthew writes about books he'd recommend to other authors researching Old Shanghai.

My latest novel, Shanghai Twilight, is a noir thriller set in 1932. Tom Lai is a Chinese-American expat and successful nightclub owner in Shanghai. He’s about to start a new life in his native San Francisco with his mistress, Ho Mei-chen, when the Green Gang accuses him of being a Japanese spy. Tom has forty-eight hours to prove his innocence or face a horrible death. Worse still, tensions between Japan and China are reaching fever pitch, and a full-scale war threatens to break out in Shanghai. Like my Reiko Watanabe / Inspector Aizawa series, I relied on several nonfiction books to capture the look and feel of 1930s Shanghai. Here are the main sources I used when writing Shanghai Twilight.

Shanghai – Rise and Fall of a Decadent City by Stella Dong (2001)
One of the best sources about Old Shanghai. This book covers the city’s history from 1842 in the aftermath of the Opium War, to the Communist takeover in 1949. Those years span the most romantic, violent, decadent, corrupt, and vibrant era of Shanghai’s history, a zeitgeist that many fiction writers strive to capture. Dong’s book goes into detail about the financial and business taipans who helped build modern Shanghai, the gap between rich and poor, the White Russian refugees, the 1927 purge of Communists, and the criminals from the Green Gang who helped turn the city into the metropolis of vice. Also covered are the two battles with the Japanese in 1932 and 1937, the occupation period, and the eventual fall to the invading Communist People’s Liberation Army in 1949, which finally ended Old Shanghai.

China’s Trial by Fire: The Shanghai War of 1932 by Donald Allan Jordan (2001)
Possibly the most thorough English language account of the 1932 War, and also the only book I’ve ever come across that is totally devoted to this forgotten conflict. China’s Trial by Fire goes into great detail about the political events and intrigue that led up to the war, as well as the strategies, campaigns, and grueling battles that made up the actual fighting. Lots of great, rare photos and interesting details.

Policing Shanghai by Philip E. Lilienthal (1995)
A must read for all those who want to write crime fiction set in Old Shanghai. It covers the various police forces of the city – the Shanghai Municipal Police, Le Garde Municipale, and the Public Security Bureau – along with the various criminal factions within the city, most notably the all-powerful Green Gang. Crimes, from drug running to kidnapping, are presented in great detail, along with the Nationalist Government’s efforts to crush the Communist underground operating within the city during the so-called “Nanking Decade.”

Tales of Old Shanghai by Graham Earnshaw (2012)
I’ve always been a big proponent of reading contemporary accounts when writing historical fiction. Memoirs, news reports, and novels published during the era you’re writing about offer a wealth of details and perspectives that might not be covered in an academic source. This book is more a collection of contemporary news accounts from various Shanghai publications during the 1910s, 1920s, 1930s, and 1940s, covering everything from musings about coolies, nightclub recommendations, to the fly menace that plagued the city. A great time capsule.

The Chinese Army 1937–49: World War II and Civil War by Philip Jowett and Stephen Walsh (2005)
As mentioned in my post on researching historical Japan, I am fascinated by historical uniforms and try to add accurate details into my novels. For reference, I always turn to Osprey Publishing, who put out this fact-packed yet concise book about the Chinese Nationalist Army during the 1930s and 1940s. Often ignored by Western sources, this is one of the very few books in English that details the uniforms, weapons, training, and command structure of the Nationalist Army during this era.

Japanese Special Naval Landing Forces: Uniforms and Equipment 1932-45 by Gary Nila, Robert A. Rolfe, and Christa Hook (2006)
Another Osprey Men at Arms book, this showcases the uniforms, training, and equipment of the Japanese Special Naval Landing Forces, aka the Imperial Japanese Marines. The book is quick to state this organization didn’t function like the US Marine Corps, but in time it did evolve into a rather elite unit of the Japanese Navy. In the 1932 Shanghai War though, they still wore the same uniforms as the Imperial Navy rank and file, but would soon distinguish themselves in battle in the streets of Chapei.

The Generalissimo by Jay Taylor (2009)
This book is a more sympathetic biography of Generalissimo Chiang Kai-shek than previous records, most which are heavily coloured by General Stilwell’s personal biases. Nonetheless, this is a comprehensive and well-researched account of Chiang and the politics of China and is worth a read. In particular, it gave me perspective of exactly what Chiang was doing after his resignation in the wake of the Japanese invasion of Manchuria and his political struggle with Wang Ching-wei in January 1932.