This month on Indie Spotlight, Carlos Hughes tells us about how his work teaching English as a foreign language led him to write about his experiences. Over to Carlos... 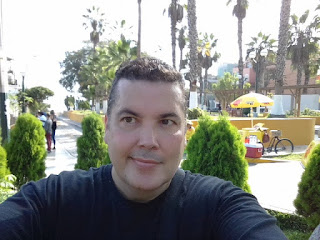 There are very few things that I am any good at where I would put a label on myself but I think a label that I could put on myself that wouldn't break the Trade Descriptions Act would be one of a writer. Even as a kid who couldn't stand school and would eventually leave/be thrown out with no qualifications at 16 - I always loved creative writing classes during English lessons. The only problem was I tended to go a bit mad when it came to creative writing and would end up writing 15 or so pages of a story within an hour only for the teacher to go 'Hughes, what have I told you before about this? Two pages MAXIMUM!'

So it wasn't like anyone in school was that bothered about my abilities or hidden genius but it was somewhat therapeutic and enjoyable for me.

Fast forward twenty years or so later, a working life of constant failure and false beginnings from a stint in the army to warehouse work, factories, night shifts with agencies and long periods on the dole - I eventually went back to education at the age of 31 after reading a book in St Helen's Library by Sue Griffith about teaching English abroad - I was amazed - did people actually do this for a living? Apparently they did - later on that week, I met a nice elderly gentleman at the bus station who told me about his son who was living in Taiwan and had married a lovely lady over there and was making his life teaching English. When you get signs from The Universe such as these, it's your job to find out more information. Later on that year, I was on a BA (Hons) course to study linguistics and TEFL and Swansea University.

As graduation came nearer and nearer, I was busy making plans for my exciting future life as an expat. My sights were set on Russia, I had taken a trip out there a decade before and fancied a return, there was also Spain that seemed to have plenty of work for a qualified fellow like me - however, I also had a couple of busted teeth that needed fixing and I found out that in Asia - you could sort out short sight with affordable LASEK treatment. Being sick of wearing goggles and not smiling on pictures - I enquired about the English teaching scene out east. It seems they wanted our services too - especially in countries like South Korea that paid the airfare as well as decent wages - so my mind was set, I was off to South Korea - somewhere that I had scant knowledge of and it was only going to be for a year or two, mind. I could go to Russia and Spain once I had sorted my face out.

One year 'out east' turned into ten years - it doesn't seem like ten years though, it just seems like it has been a very condensed year, the smells, the culture shock, the slow adaptation to it becoming my home - I went from South Korea to China and then to Saudi Arabia and back again - living and loving my life - I got a masters degree in the meantime and then I realised I had something to write about.

I wrote my first chapter of what was to become 'White Monkey' and published it on Facebook, people commented that it was funny but it stayed right there as I had no intentions of developing the story. It was only when I was in Saudi Arabia that I met a couple of esteemed writers - John and Katherine Dolan who read that first chapter too and encouraged me to write the rest - if I hadn't had taken a year out to live in the dusty oasis of Najran which sits on the border of Yemen and met them - there would be no book.

I found out that my life previous to becoming a globe trotting educator was very crucial to the development of the the book as all those years of coming fifth in two horse races and losing more or less every battle I partook in brought an important strand of pathos to my writing - it's good to know that those years weren't wasted after all.

Like most budding writers, I sent it to the usual round robin of agents, publishers - big and small - nobody seemed to care until I read an article in The Guardian about Nick Spalding who made a living out of self-publishing his comedy books on Amazon. That was the light bulb moment for me - and in June 2016 - White Monkey was published on Amazon.

Every sale and every nice review is like being a kid on Christmas morning, that people give it a chance and find it funny has made it all worthwhile. I have written another book set in my hometown that has a boxing theme and I plan to write a few more books - the vast majority of them will have Asian themes that include Saudi Arabia (that is a sequel to White Monkey), Thailand and China.

I plan to self-publish these books through the medium of Amazon.

White Monkey is available at this link
Posted by Ann B at 05:32