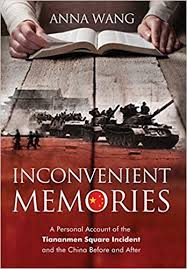 Anna Wang was born in China in 1966, and was living in Beijing in 1989, during the Tiananmen Square protests. She has published nine books in Chinese. She now lives in the USA, where she has just brought out her first book in English, Inconvenient Memories. This is a personal account of the Tiananmen Square protests and of China before and after those events.  But is it memoir, or autobiographical fiction?  Anna here addresses that question.

In the beginning, I wanted to write a memoir, but without knowing it I began to embellish things and insert details that weren’t true. I couldn’t decide which way to go, writing a memoir or autobiographical fiction, until one day I stared at my finished chapters and wondered which lies I could do without.

The first chapter was about my grandmother and the influence she had on me growing up. Born in 1920, my grandmother had “liberation-feet”. China’s tradition of binding women’s feet began to die out in the 1920s, but it didn’t go away overnight. Foot-binding usually takes two years to complete, which gave parents plenty of chances to change their minds. As a result, a generation of women had liberation feet, which were bigger than bound feet but smaller than feet that grew naturally.

Throughout their lives, it was inconvenient for women with liberation feet to buy proper shoes. Their feet were not only smaller but had a pronounced curve since the arches of their feet had been broken. Under the planned economy, implemented by the Communist Party in China since 1949, this need had become especially hard to fill. Although the socialist state was supposedly to take care of every citizen, the needs of minorities were unfortunately overlooked.

My book begins with my grandmother sitting in bed making shoes all day long. She not only made her own but made them for friends in the same predicament. This scene was nothing but truth. But the narrator was a bit different than the real me. In the book, seeing her grandmother always laboring over shoes makes the narrator uncomfortable, while in reality, my grandmother staying engrossed in shoemaking was a blessing. I wanted to play with whatever muddy things I could find in the garden without being disciplined. Could I cut the part where the narrator contemplated how a huge part of her grandmother’s life had been wasted? Of course not. My point was to exhibit the planned economy’s shortcomings.

As the book progresses to the Tiananmen Square Protests in 1989, I raise the argument that the protests stemmed from a longing for democracy combined with fear of the nascent market economy. This is an observation I borrowed from my former boss. In 1989, I worked for a foreign company’s Beijing branch. When the protests began, my Japanese boss was afraid that the company’s investment in China would be lost if the students got their way.

My boss’ opinion had been buried in the deep recess of my brain, and it only surfaced from oblivion while I was writing this book. Back in 1989, as the protests unfolded, I cheered along with the students for democracy and freedom, just as everyone else did. I didn’t pay any attention to the nationalism sentiment implied by their anti-foreign trade stance. But in my book, my worries grew as the students sang “L'internationale” in Tiananmen Square. It was a lie, but I decided to keep it for drama and contrast.

Overall speaking, while the life events depicted in the book are mostly true, the book is fundamentally different from a memoir in that the narrator never truly existed. I am not quite the inquisitive, sensitive, and liberal child watching my grandmother laboring, nor I am the cool and insightful witness while the Tiananmen Square Protests happening. The version of me in my story is exponentially smarter than the real me at the time. She is the person I wished I was. Therefore, it has to be fiction.