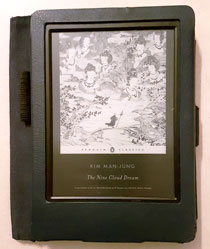 Backlist books is a column by Lucy Day Werts that focuses on enduring, important works from or about Asia.

This post is about The Nine Cloud Dream, also known as The Cloud Dream of the Nine, a celebrated novel written in seventeenth-century Korea but set in ninth-century China. Often compared with Hermann Hesse’s Siddhartha, the novel follows one man on a journey to discover the meaning of life according to a mixture of Confucian, Taoist and---most importantly---Buddhist ideals. His fate is entwined with the fates of eight gifted, beautiful and otherworldly women in a kind of alternate reality. The story is thus a kind of collective dream of nine individuals.

See below to find out what you need to know to decide whether you should read The Nine Cloud Dream, or what you should know about it even if you never do!

A key concept in the novel is the Taoist idea that multiple realities overlap, that all is illusion, or that we cannot know what is real. Westerners are familiar with the parable about a Chinese philosopher who dreamt he was a butterfly but then asked himself whether he might be a butterfly dreaming he was a philosopher. The philosopher in question is Zhuangzi, referred to in the novel as Chuang Chou.

The Nine Cloud Dream opens by telling of Hsing-chen, a young, handsome, devout Buddhist monk likely to become the next master of the monastery. While on an errand, Hsing-chen falls prey to a variety of worldly desires. His punishment is to be sent to the underworld and reincarnated to face those desires. Most of the narrative is the story of his human life as Shao-yu. Unlike Siddhartha, whose path to enlightenment passes through a number of dissatisfying lifestyles in sequence, Shao-yu is blessed with a career that snowballs into one grand success. When he reaches old age, however, he encounters a man who transforms him back into the young monk Hsing-chen, who then believes his reincarnation was (perhaps) only a kind of instructive vision.


"Is this just fantasy?"

Regardless of whether Hsing-chen’s life is more or less real than Shao-yu’s, or equally real, or equally unreal, there are a variety of fantasy elements in the story that make it not merely a historical yarn.

For example, the errand that leads Hsing-chen off the straight and narrow path is to go and see the Dragon King in his Underwater Palace. He returns partway by riding on the wind, then pauses to flirt with eight fairy women, in part by turning the fruit on the branch of a tree into jewels. Shao-yu’s life is no less fantastical. He, too, visits an underwater king, whose shape-shifting daughter explains how to rid a lake of a magical curse.


What is the meaning of life, according to The Nine Cloud Dream?

Hsing-chen the monk desired alcohol, women, riches, leisure, success, fame and descendants. Shao-yu got them all in quantities that are downright absurd. Yet at the end of his life, he still desired something more: spiritual enlightenment. The lesson is that satisfying the desire for worldly things is neither necessary nor sufficient for human happiness. Only the teaching of the Buddha can solve the problem of human desire… by erasing it.


Is the novel just a book-length Buddhist sermon?

Although the novel’s message is dry and ascetic, the novel itself is anything but. Shao-yu’s beginnings are humble, but as time passes he not only becomes a successful student, government official and imperial favourite, he acquires two wives and six concubines, who miraculously all get along. The fun of the novel is the process of encountering, falling for and joining with these eight women, the incarnations of the eight fairy women who also must learn to want to walk the path of enlightenment. Though Shao-yu suffers no major setbacks, he does encounter difficulties that he must overcome, and a number of contests, tricks, jokes and deceptions amuse readers as Shao-yu’s circumstances improve. Poems written by the characters also enhance the aesthetic experience, as in the much longer later Chinese family saga, The Dream of the Red Chamber or The Story of the Stone.


Is the protagonist a character readers can identify with?

Yes and no. The story is a parable, so the main character is a placeholder meant to represent the reader, in much the same way the character named ‘Christian’ is meant to represent the reader in the classic allegory Pilgrim’s Progress. We are meant to share Hsing-chen’s desires and vicariously enjoy the pleasure Shao-yu gets from satisfying them, though we cannot hope to reach a comparable level of success. What is relatable about the character is not any specific characteristic he has but the universal desires he feels.


Is the novel difficult to read?

The translation by Heinz Insu Fenkl published by Penguin in 2019 includes an informative introduction and a mass of helpful notes that explain the novel’s historical context, literary references, numeric symbolism, spiritual messages and subtle innuendos. The novel is not long, and readers can look forward to a delicate, stylized line drawing for each new chapter. The biggest challenge might be remembering the women characters’ names, though the names and their meanings are listed conveniently in a chart in Appendix A.