Backlist books: Rashomon and Other Stories by Ryūnosuke Akutagawa 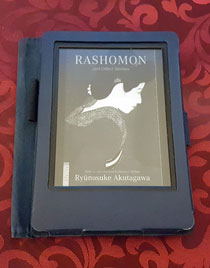 Backlist books is a column by Lucy Day Werts that focuses on enduring, important works from or about Asia.

This post is about Rashomon and Other Stories, a collection of English translations of six of the “finest and most representative” short stories by Japanese author Ryūnosuke Akutagawa, who wrote over 100 short stories before he committed suicide in 1927 at the age of thirty-five.

Two of the stories in the collection, “Rashomon” and “In a Grove”, were combined in the award-winning 1950 Akira Kurosawa film Rashomon. The term ‘Rashomon effect’, named after the film, is used when eyewitnesses do not agree on the specifics of an event. It suggests that the truth is subjective or unknowable because people are unwilling or unable to describe it accurately.

See below to find out what you need to know to decide whether you should read Rashomon and Other Stories, or what you should know about it even if you never do!


What is the significance of ‘Rashomon’?

‘Rashomon’ is the name of an old gate of Kyoto. It was a grand construction, a building with a tower room or rooms straddling a road rather than simply a pair of doors in a wall or a bare archway for people to pass beneath. Before the gate disappeared completely, it fell into disrepair and developed an unsavoury reputation. Thieves used it as a hideout and people would abandon unclaimed corpses there. Akutagawa used the gate as a symbol of the decay of society in the short story that bears its name.


What is “Rashomon” about?

A poor man intending to take shelter in an upper room of the dilapidated gate takes stock of his life and reflects on the expediency of crime. After he encounters an old woman scavenging among some dead bodies, he comes to a decision. Kurosawa not only used the setting of the story “Rashomon” in his film, he also used its themes to frame the main narrative of the film, which was taken not from “Rashomon” but from “In a Grove”.

A bandit rapes the wife of a samurai and the samurai is killed. Readers are presented with the subsequent court testimony of a woodcutter, a priest, a policeman, and the woman’s mother,  as well as the testimony of the bandit, the wife, and (strangely) the ghost of the dead samurai. The accounts do not agree on the details of the incident. In particular, the bandit, the wife and the samurai himself all claim to have caused the samurai’s death! The author does not resolve the conflicts between the stories, choosing instead to leave us wondering about the nature of truth, lies and self-deception.


What are the differences between the stories and the film?

Kurosawa’s film begins after the judge has heard the testimony in court. The woodcutter and priest, sheltering under the decrepit gate during a downpour, recount what they saw and heard to a third man who joins them there. Some elements not present in “In a Grove” are added to the woodcutter’s story, and the third man takes on some of the characteristics of the desperate man in “Rashomon”. Whereas the short story ends when the samurai finishes testifying about descending into darkness upon his death, Kurosawa’s film ends on a hopeful note, with a noble act and the highly symbolic end of the torrential rain.

The text leaves much to the imagination. The testimony is presented as a series of monologues all in a rather factual tone. There are a handful of notes about the emotions or expressions of the speakers, but mostly we are left to read between the lines. The bandit presumably wants people to know what a successful bandit he was, regardless of the details this most recent adventure. The woman is presumably distressed about both the rape and the death of her husband, regardless of who caused it. The husband is presumably humiliated because he has been outdone by the bandit, whether or not in the manner the bandit described. These emotions are brought to life in exaggerated form on screen in the film.


What are the other four short stories about?


Yam Gruel
A lowly official is constantly made the butt of jokes. Will he ever have the chance to eat more than a bite of yam gruel?

The Martyr
A Christian foundling named Lorenzo becomes entangled with a local girl. Who will pay the price?

Kesa and Morito
Two lovers, Kesa and Morito, have agreed to kill Kesa’s husband. How do they really feel about each other, though?

The Dragon
An aggrieved priest puts up a sign by a pond saying that on a certain date, a dragon will rise from it. Does anybody credit this claim?