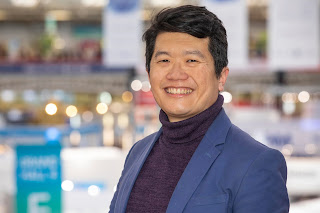 Nicky: When you were growing up, what were the first Chinese-language stories you came across, and what drew you to them?

Jeremy: Growing up in a former British colony can be a destabilizing experience. Singapore's official languages are English, Chinese (meaning Mandarin), Malay and Tamil, and there were always several languages swirling around me ― some of which I felt I was being encouraged to know (the English in the Enid Blyton books my parents bought us, the Mandarin they sent me to a neighbour to learn) as well as others I had less access to (the Cantonese they sometimes used with each other, the Tamil my dad occasionally spoke on the phone).  I encountered Chinese stories in all kinds of ways, on TV and in my school textbooks, but often freighted with cultural baggage: there was a weight of obligation on us, as English-educated people, to hang on to our Chinese heritage. It wasn't until I got some distance from Singapore, by moving to the UK for university, that I was able to enjoy Chinese-language literature on its own terms. While I came to appreciate the grounding I had received in Singapore, particularly in secondary school, I don't think I read a Chinese novel for pleasure till I was in my twenties. Once I was able to do that, I quickly developed a taste for it. And being a writer of English and a lover of Chinese fiction, it was a logical progression to literary translation ― the best way I could think of to get right inside these books.

Nicky: What and who really excites you now about Singapore contemporary literature? What are your favourite writers in other South-East Asian languages?

Jeremy: For better or worse, a large amount of Singapore's contemporary literature is written in English, and many of the writers who excite me (Sharlene Teo, Tania de Rozario) are Anglophone. Of course there continues to be exciting work in Chinese (Yeng Pway Ngon, Yu Miaomiao), Malay (Isa Kamari) and Tamil (Latha), but even with a recent rise in the number of translations, I don't know that we are yet at the point when these different language streams converge into anything approaching a national literature. Many Singaporean and Malaysian Sinophone writers choose to publish in Taiwan ― the so-called "Mahua" authors. One of them, Ho Sok Fong, has a book coming out soon from Granta, translated by Natascha Bruce, that I'm very much looking forward to. I'm glad you asked about other South-East Asian languages, because they're having quite a moment. Right now I'm very into Duanwad Pimwana (translated from Thai by Mui Poopoksakul), Norman Erikson Pasaribu (translated from Indonesian by Tiffany Tsao), and Nha Thuyen (translated from Vietnamese by Kaitlin Rees). I'm sure there are many other voices I would love who have not yet found their translators, and I can only hope they too find their way into a language I can read.

Jeremy: Mainland Chinese literature already embodies huge regional variations, so it's unsurprising that work from outside the Mainland is similarly disparate. I could generalize in very broad terms (eg. Mainland fiction is more focussed on story, Taiwanese fiction is more focussed on style) but you'd have to take that with a giant grain of salt, because there are so many exceptions to any such statement. I suppose the one obvious different isn't anything to do with the writers: books published in China have to be approved by the censor. For that reason, even though I find it easier to read simplified Chinese, I don't tend to pick up the Mainland editions of Taiwanese or Hong Kong books.

Nicky: There is a big gap between the number of male and female mainland Chinese writers translated into English. Is this true in Singapore and elsewhere? Do you have any favourite women writers?

Jeremy: So few Chinese-language writers from Singapore are translated ― maybe a couple a year ― that it's hard to make any kind of statistical analysis. One tremendously prolific female writer, You Jin, and her equally tireless translator Shelly Bryant, do a lot of the heavy lifting here. I've translated books by women writers such as Zhang Yueran, Yan Ge and Su Wei-chen, most of which were projects I pitched. The vast majority of the books I've been asked to translate have been by men. I'm not sure if this is because publishers subconsciously match up author and translator gender, or just because men are over-represented in translation. Probably a bit of both. I've also been working with some women playwrights recently (Chen Si'an, Wei Yu-Chia and Shen Wan-Ting, among others). There are many more I'd like to translate, if I ever got the opportunity. My favourite writers change pretty much constantly, but right now I am all about Sally Rooney and Olga Tokarczuk.

Nicky: What are you working on now?

Jeremy: I have three books on the go at the moment: Far Away by the Taiwanese author Lo Yi-Chin (for Columbia University Press), Strange Beasts of China by Yan Ge (who is from China, but now lives in Ireland, though right now she's in Norwich; that's for Tilted Axis), and Delicious Hunger by Singapore's Hai Fan, for Honford Star (this one isn't confirmed -- it depends on us securing funding). I'm also actively pitching books by Zou Jingzhi, Liang Hong and Nieh Hualing (publishers! If you would like a novel-in-stories about the Cultural Revolution, a book-length reflection on the plight of rural Chinese villages, or a continent-spanning memoir about one woman's journey from China to Taiwan and then to Iowa -- you know where to find me). And then there are the other bits and pieces (short stories and samples here and there), not to mention my own writing (I'm supposed to be writing a novel, in amongst all this...) This is a lot, now I look at it. Fortunately I have trained my body to no longer require sleep.