Edogawa Ranpo is synonymous with Japanese horror and mystery fiction. Using a pen name based off of Edgar Allen Poe, (try saying it three times fast), Taro Hirai wrote many short stories and novels as Ranpo (sometimes Romanized as Rampo). 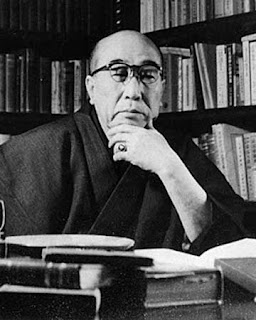 At a Japanese circus, a dancing dwarf – Roku – is a pathetic, impish figure who exists to be the butt of jokes. Indeed, he even wears a red jester outfit. He’s forced into drinking alcohol, something he doesn’t do, but a pretty gymnast named Ohana proceeds to really torment him by nearly suffocating him with her backside. Quick on his feet, Roku takes his revenge by tricking her into a macabre magic trick – Beauty in the Guillotine Box. The trick is a gruesome sight, but is all what it seems?


Seven men meet in a room with red armchairs for the purpose of exchanging scary stories. One night, the newest member of the Red Chamber Society, a sketchy character named Tanaka, begins his tale. Tanaka has grown bored with pleasures that would satiate most men for a lifetime. Eccentric orgies, decadent food, even blood sports offer no pleasure. However, one activity entices Tanaka – coldblooded murder. But his weapons are not guns nor knives, but his intelligence. His first victim, a blind man who he’s a good terms with, is led into a pit by Tanaka, straight to his death. Unsuspected by the Police, Tanaka continues his murder spree, and ironically finds the joy in life again. As with many Ranpo stories, there’s a strange twist at the end.


A mystery writer is approached by a fan, a charming young woman named Shizuko Oyamada. She is desperate for help, as it turns out that another mystery writer has been sending her disturbing threats. She confesses that this writer was a former lover of hers, Ichiro Hirata, who is now writing dark crime fiction under the pseudonym Shundei Oe. Although a married woman, the narrator becomes smitten with Shizuko and agrees to help her out, eager to match his wits and see if he’s as good as the fiction he writes. Unfortunately, he overestimates his abilities and cannot even verify that Hirata and Oe are one in the same. Things take an even darker turn when Shizuko’s husband is murdered and the disturbing letters become even more detailed. As the name suggestions, this is a shadowy tale with the truth always obscured in the dark.


Although I covered it in my 7 Edogawa Ranpo Recommendations blog post, I felt this story deserved all the praise it could get. Easily one of Ranpo’s creepiest, The Human Chair is about a young female writer named Yoshiko who receives a strange letter from a fan. Yoshiko’s pleasure soon turns to horror and dread as the writer confesses his disturbing actions. Unbeknownst to anyone, the writer has been secretly entering a chair in Yoshiko’s house because of a bizarre fetish to be turned into a piece of furniture. The descriptions and motives are enough to give you the chills even today. Thankfully, this story has gained traction in the West, with YouTube videos narrating the whole story. Also, check out manga artist Junji Ito’s great retelling/re-imagining of this classic tale.