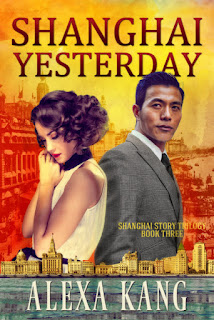 Indie spotlight focusses on self-published authors and self-publishing. Alexa Kang is a Boston-based, Chinese-American author. She publishes her World War II historical fiction trilogy, Shanghai Story, through her own house, Lakewood Press. Alexa has previously shared her experiences writing the first two of these books with Asian Books Blog readers. Today is the publication day of the third and final book in the series, Shanghai Yesterday.

Shanghai Yesterday follows Clark Yuan, the Western-educated son of a prominent Chinese family in Shanghai and former a KMT operative, as he joins the Chinese secret police’s underground resistance movement. The story also continues with Eden Levine, a Jewish refugee from Munich, as she and the Western press in Shanghai work to expose the atrocities committed by Germany and Japan to the world.

Alexa will here discuss a little bit about her trilogy, followed by a more detailed examination of the Jewish and immigrant experience in occupied Shanghai after 1941.

In May 2018, I released the first book of my Shanghai Story trilogy with the goal of bringing to WWII historical fiction readers the story of the war in China. Since then, I have discovered that readers today are in fact very curious to learn more about the war in the Pacific through fiction.

I am now releasing Shanghai Yesterday, the third and final book of this trilogy. I am so glad to be able to offer a view of the war from Asia, and to give a voice to the Chinese experience of the war through my main character Clark Yuan. 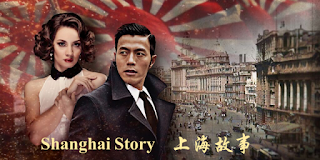 My trilogy is a saga that tells the story of how China fell into the war. It ends shortly after the Pearl Harbor attack. The war would continue another four years, so I wasn’t able to share with readers through Shanghai Story how life in Shanghai deteriorated from 1942 to 1945 before the war ended. Today, I want to give everyone an overview of what happened in Shanghai during those years.

For the Chinese, the war in Occupied China continued through resistance efforts. In Shanghai Yesterday, I had written extensively about the Chinese resistance. Due to the large population and varied interests, the resistance groups were splintered. The various groups struck whenever they could, and their tactics were often violent. My novella, The Moon Chaser, a spin-off story from Shanghai Story, gives a glimpse of what life was like for resistance fighters. For ordinary Chinese civilians, many became impoverished as resources became scarce and the economy was destroyed.

The fall of Shanghai brought yet another sad ordeal to the Jews. Since the mid-1800s, Sephardic Jews had been instrumental in building and bringing prosperity to the city. After Kristallnacht, thousands of European Jewish fled to Shanghai, one of the few cities in the world open to the refugees. By the time of the Pearl Harbor attack, the population of Jewish refugees had grown to approximately 16,000. They built vibrant a community in the area known as “Little Vienna” in Hongkew, which was incidentally located in the Japanese controlled district of the International Settlement. Their lives flourished as they opened cafes, bakeries, schools, theaters, political clubs, hospitals, and shops.

Historically, anti-Semitism did not exist among East Asian peoples. For the Japanese, persecution of Jews was not in their plans during WWII. However, as they were allies of Germany, the Nazis were keen on eliciting their help to annihilate the Jewish people who had escaped. In 1941, SS Colonel Josef Meisinger, a Gestapo officer who was nicknamed “Butcher of Warsaw” for his anti-Semitic activities in Poland, arrived in Shanghai and campaigned for the Japanese to adopt the “final solution.” He tried to convince the Japanese that Jewish people must be eliminated for their own protection. In July 1942, he even proposed to Japanese Vice Consul Shibata that they should round up all the Jews in Shanghai from their synagogues on the eve of the Jewish New Year for extermination.

The Japanese never quite bought into the Nazis ideology about the Jewish people. They did not follow Meisinger’s recommendations nor did they carry out anything as drastic as the “final solution.” Shibata himself was horrified by the proposal, and personally went to warn the Jewish community. (Shibata would suffer personally and politically for this.) Nonetheless, Japan did succumb to German pressure. In November 1942, the Japanese authorities approved a plan to create a restricted ghetto. In February 1943, they declared a “Designated Area for Stateless Refugees”, and ordered all Jews who arrived after 1937 to move their homes and businesses into an area about one square mile in Little Vienna. Suddenly, the lives of thousands of Jews were disrupted, and they had to relocate into crowded, squalid houses in that area.

The conditions of the ghetto were somewhat better than those in Europe. The area was not walled or barb wired. In fact, ten thousand Chinese also lived there, so the Jews were not isolated. However, the area was patrolled, and food was rationed. Many lost their livelihoods, and only a lucky few obtained work permits to leave the area during the day.

The group that the Japanese actually imprisoned after Pearl Harbor were British, Americans, Australians, and citizens of countries that were now openly at war with Japan. In January 1943, about 8,000 “enemy civilians”, including women, children, and the elderly, were put into internment camps. They were allowed to bring only basic belongings with them. Since Western foreigners held a privilege status for so long, some didn’t initially believe the Japanese were serious and thought their detention would only last several days.

The internees were housed in camps set up at the assembly centers at Longhua, Pootung, Chapei, Yu Yuen Road, Yagntzepoo, and the Columbia Country Club (formerly an American club). The conditions were crowded and sanitation was poor, but by all accounts, the internees generally did not suffer maltreatment.

Both the Jews in the ghetto and internees maintained life as best as they could, setting up schools, social activities, entertainment, religious gatherings, and even their own newspapers, within the communities until they were liberated. Everyone suffered hunger food and water shortages, and diseases such as malaria. Toward the end of the war, hunger was severe and widespread as Japan became unable to feed all their detainees and prisoners.

Despite the mild treatment of internment camp prisoners in Shanghai, Japan was not so forgiving to individual foreign nationals and Chinese who they believed were conducting subversive activities. Journalists who spoke out against Japan prior to the occupation were taken to the notorious Bridge House prison and tortured. I had written about this subject in Shanghai Yesterday. Outside of Shanghai, the treatment of prisoners of war varied depending on locations. Those in the Philippines suffered horribly after the Bataan Death March.

Shanghai Story (book 1) will be free on Amazon from October 16-19. Shanghai Yesterday, the final volume of this trilogy, will be officially released on October 17. The trilogy is also available on Kindle Unlimited.
Posted by Aurelia Paul at 13:54