My Travels in Ding Yi. Nicky Harman looks at the latest translated novel from Shi Tiesheng 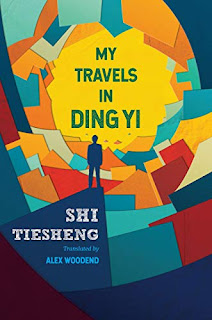 One of the most interesting novels to come out in translation this year is My Travels in Ding Yi (ACA Publishing, 2019) by Shi Tiesheng (1951-2010).

Shi's writing ranges widely, from disability, to reflections on philosophy and religion, to magical surrealism, to an entertaining vignette on football and a meditation on his local park and his mother. However, he first became famous for writing his personal experiences of being disabled. One of his most famous short stories is The Temple of Earth and I  (translated by Karen Gernant and Chen Zeping), in which he talks movingly about the frustrations he faced, and how he and his mother struggled to cope. Back in the 1980s, discrimination against the disabled was embedded into the language and society alike. Sarah Dauncey in her paper, Writing Disability into Modern Chinese Fiction, Chinese Literature Today, 6:1 (2017) says that '...canfei 残废 (invalids) was still the accepted equivalent to the English terms disability and disabled with all its retained connotations of uselessness and rubbish as reflected in particular by the fei 废 character.'


A more cerebral type of work altogether is Notes on Principles (1996), which made it onto the Paper Republic 2009 List of Best Untranslated Fiction, where it was described as an 'incredible challenge of self-definition in the new China, dramatized through the experiences of six characters: a painter, a teacher, a doctor, a poet, a director and a disabled person.' Paper Republic adds: 'Shi Tiesheng  … is probably the most unjustly overlooked Chinese writer and his novel Notes on Principles has become a modern classic. Telling the stories of five protagonists (a painter, a teacher, a poet, a doctor, a director and a disabled person) growing up in post-1949 China, it is a contemplation of life, suffering, myth, dreams and reality – a lucid search for self that should appeal to western readers. Notes on Principles has had a sort of cult status since its publication in 1996, a remarkable achievement given the changes in society and literary taste in the last decade.'

In 2006, Shi Tiesheng published My Travels in Ding Yi, arguably the most ambitious of his work to have made it into English, (ACA Publishing, 2019). Its hero is an age-old spirit called Shi who inhabits a young man called Ding Yi and travels with him through the turmoil of China in the second half of the 20th century. Shi (yes, this is also the author's own surname) begins: 'Of all the brief lives I've inhabited, humans are definitely the most interesting. Poetry and painting, literature and drama, song and dance; there's nothing they can't do. As I fell into this young creature named Ding Yi, a life filled with hardship, love and betrayal unfolded before me. I'll try to make this account as entertaining as possible, but please bear with me, it was several lifetimes ago.'

A contemporary of Shi, the writer Chen Cun calls the novel 'experimental and revolutionary.' What do English-language readers think about it? The consensus on Goodreads is that this is a difficult book but that there is much beautiful language to enjoy. As one reviewer put it: 'I probably nodded sagely at about a quarter of it, generally grasped another quarter, and just went with the beautifully poetic flow of the rest. Shi Tiesheng's philosophical stream-of-consciousness novel runs just over 580 pages in 156 short chapters and is dense with themes and ideas. I did experience a certain euphoric relief at reaching that last chapter, but that's not to say that the novel was an unpleasant read. It definitely isn't!'

Personally, I salute ACA Publishing and the translator Alex Woodend for taking up the challenge and producing something new and fresh to offer to western readers of contemporary Chinese fiction, broadening all our reading horizons.

For those who would like to start exploring Shi Tiesheng's writing, I highly recommend Dave Haysom's essay for Words without Borders. Dave Haysom has translated two Shi Tiesheng short stories and rates his writing very highly, so I was delighted when he agreed to answer some questions for Asian Books Blog.

NH What drew you to STS in the first place?
DH Notes on Principles was definitely the work that first got me hooked on his writing, and it remains my favourite Chinese novel. His characterisation and dialogue are wonderful, he brings characters to life with just a few words and details. There's also a metaliterary aspect to Notes on Principles which definitely excited me when I first read it: the book draws attention to its own artificiality in various ways, but doesn't undermine the emotional impact.

NH He is not always an easy writer to follow, because he explores religion, and philosophical beliefs, would you agree? Have you come across pieces of his that are particularly difficult, and what made you persevere?
DH I don't think religion and philosophy are inherently difficult subjects, it's more a matter of how an author approaches them. I would say that in Notes on Principles he finds just the right balance between establishing narrative and exploring more abstract, philosophical concepts, but in some of the short stories and essays they aren't blended together so well, which can make all the big ideas a little indigestible.

NH 'Football', however, is on the surface a rather understated short story, and it's a relatively easy read. Why did you choose that one as your first translation attempt (seven years ago now! in 2012).
DH I've always been drawn to literature about football, which is something I wrote about during the last World Cup. So as soon as I saw the title of 'Football', I knew I'd want to check it out. It is quite understated, as you say, which is one of the reasons I thought it might be a good place to start, at the very least I felt relatively confident in my understanding of the original text. Plus, I really liked the relationship between the two protagonists, and I was intrigued by the premise (a foreign football team visiting Beijing in the eighties, even if we never actually get to see the football.)

NH And why did you more recently choose 'The Year of Being 21', for Asymptote?
DH I attempted to explain some of the reasoning behind that choice in the essay I wrote for Words Without Borders. I think it's a good introduction to Shi Tiesheng: it explores some of his major recurring themes, but tones down some of the characteristics that can be off-putting for some readers.