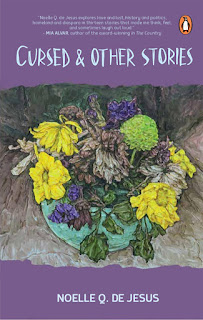 Noelle Q De Jesus is a Filipino American short story writer who explores issues of identity, belonging, and attachment. Her stories are intimately shaped around individuals, yet simultaneously address broader questions relevant to worldwide communities. Today we hear from her about her latest collection, Cursed and Other Stories.

The truth is, initially, Cursed and Other Stories became a book because I had too many short stories for one volume. Its genesis took place in late 2014, when I looked up from my messy life of being wife, mother and freelance writer, and realised I was not another writer that had written nothing. I was a woman of 48 who had written over 30 stories, a number of them published, and I could put together a book if I wanted to. That process meant, sorting stories and grouping them. My second realisation was I had actually written enough to make one and a half books. I did not even know it.


You might say that Cursed and Other Stories is really a follow-up or sister volume to my first collection of short fiction out of Ethos Books Singapore, Blood: Collected Stories, which comprises some 25 pieces of varying lengths—what my French translator, Patricia Houefa Grange, calls flash, medium, and long. It takes someone else sometimes to help you realise the kinds of things you always write. (Patricia translated Blood: Collected Stories in its entirety, and as a result of her initiative, a French edition of that volume will be coming out of Editions Do in Bordeaux in the Fall of 2020).

If “Blood” is coming of age, “Cursed” is adult. And the ones that were meant for an adult
book, in the order they were written, were, “In Her Country”, “Cursed”, “Wanting”, “Dreams
in English”, “Recollections of An Older Bride” and “Posing”. All completed by 2014, they
were like actors who make their appearance only in the second act, waiting patiently
backstage still back-and-forthing over their lines, to enter stage. To give you an idea: “In Her Country”, which, like “Cursed”, I wrote in 1992, was first published by Puerto del Sol in 1995, the same year “Blood” won a Palanca Award.

A book of short fiction is more than the sum of its parts. Every story features a facet of
current Filipino experience at home or as diaspora. But more than this, every protagonist is in painful, conflicted circumstances, trying to make sense of their journey and their responsibility in their difficult lives. Male or female, Filipino or not—these struggling, frequently sad people—husbands, wives, sisters, children, lovers, friends, find they are far from finished, and that in fact their story is not ending, it is like our story, as readers—only just begun. It is more than a Filipino book.

It took some time before Cursed and Other Stories found a home, but being accepted for
publication by Penguin Random House SEA is the happy ending I could never have
anticipated, and I will be forever grateful for it, and to the excellent journals that initially
published some of the individual stories.