The Colonel by M. Dowlatabadi

People sometimes comment that this blog discusses a “niche topic”—Asian literature. If Asian literature is considered niche, then Western Asian literature measures off the charts in niche-ness. There are various reasons why Western Asian literary works are under-read. These range from the scarcity of translations to China’s prominent geopolitical position in Asia to the presence of regional conflicts. The best way to combat this problem of lack of recognition and appreciation for Western Asian works is, of course, to read more of them! With this in mind, Piers Butel shares his thoughts on The Colonel by Mahmoud Dowlatabadi:

Today I’d like to direct your attention to the other side of Asia. Far from the East Asia of my last piece, to Iran. Iran has a deep and rich literary culture that has thrived despite years of colonial interference and oppression by both autocratic shahs and religious fundamentalists. Mahmoud Dowlatabadi is an author who represents well the changes and tensions that have rippled across Iranian culture over the last century. His novels are set in an Iran that doesn’t know where to look, set amongst average people trying to make the best of a world that no longer makes sense. People who want to get back to normal where normal seems the least possible thing.

The author himself has never seen this novel printed in Iran as, even now 30 or so years down the line, the subjects covered are considered too inflammatory by those in charge. It isn’t particularly surprising either, Dowlatabadi is brutal and searing in his excoriation of the mistakes made by successive generations in their fight for freedom -whatever that truly means. Despite the political setting and the way the book has been politicised since publication, at its heart this is a story about families and about the senselessness of conflict. And these themes are universal. 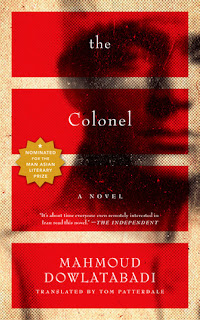 In the novel, an elderly father (and retired colonel) wakes up to a knock on the door and is informed he must collect the corpse of his daughter, tortured and killed by the state’s secret police. He is told that he must dig her grave himself that very night. This is the initiating factor but as the Colonel character struggles to carry out this task we are introduced in layered, overlapping narratives to his life and that of his family. Via each of his children, we come to understand the fault lines and traumas present in Iran as a whole. As the old man digs in the gloomy rain-soaked graveyard the past is never far away. Ghosts haunt the old man and the narrative. It is not always easy to ascertain who is really there and who a fiction of the Colonel’s grief-stricken mind  This is not a novel for the faint-hearted. Dowlatabadi pulls no punches in his depictions of torture, death, and grief. It is not a comforting book either, one leaves the book understanding that there is a particular type of person who does well out of these moral-less, violent times. The secret police, the torturers, these are the one constant on all sides of the conflict. Needed by both extremes these men are the true victors. There is, in fact, something reminiscent of Kafka in the swirling uncertainties and the senseless bureaucratic nature of the violence committed by all sides as the nation begins to consume its own children.

Despite the setting in Iran and the politics inherent in its premise, the novel is really about change, uncertainty and relationships. Dowlatabadi is at his most engaging in the sections that explore these universal themes. Where children cannot comprehend the choices of their fathers, sons seem fated to commit the same mistakes as their parents or an elderly man is unable to understand how it has come to this, why he has to bury his youngest daughter in the driving rain one night.

The novel can be confusing at times. The overlapping narratives led to uncertainty as I struggled to remember who was where and when! The book is also thick with references to Iranian history, politics, and culture that required me to dip into the extensive glossary present in my edition (translated by Tom Patterdale and published by Haus Publishing). These factors might make many readers think twice about the book, and I certainly struggled at times to untangle this knot. As such I would not unhesitatingly recommend this novel to all readers. However, if you like to be challenged in your reading, or like to discover new authors and new literary cultures or already have an interest in Iran then I suggest you give it a go and persevere through the tougher sections. There’s a lot to like here.

It is a bleak book. I can’t promise you’ll put it down with an extra spring in your step. At its best, however, Dowlatabadi has created a deeply moving depiction of a society convulsing in trauma, of misunderstandings and of families caught in the midst of inexplicable changes and insurmountable challenges.

--
If you’re interested in reading about another underappreciated author, Piers has also written about Japanese author Ryu Murakami. Read that piece here.