Murder on the Move – Learning to Love Audio

Midnight in Peking and City of Devils author Paul French has just launched his latest project – Murders of Old China. But you won’t find it in the bookstore. It’s a 12-part Audible Original covering a dozen historic murder cases in China in the early twentieth century available on Audible from December 4 2019. Researched, written and narrated by the author it’s exclusively available as an audio project straight to your headphones. And it required a different of thinking about writing and readers….

Things in the book are not as bad as some predicted. Net book sales are up about 4% year-on-year in the US this year for instance. It’s not time to break out the champagne but the worst predictions have been avoided. E-book sales have plateaued – seems most people who want to e-read are now doing it. But audio – well, wow, audio. Sales up by 43% last year and even better this year in the UK. Audible is adding subscribers at a fast rate. Add in all the podcasts and other sites for audiobooks (Downpour, Scrid, LibriVox etc) and it’s becoming a massive audience everywhere – Ximalaya has quickly become the largest spoken word audio sharing service in China, with a self-reported 400 million app downloads. It’s also, in part, a new audience – skewing younger. He easy moan that all those young people with buds in on your morning commute are not reading may be only partly true – they may well be listening to a classic, a new piece of writing or a podcast.

I’ve long been excited by audio and have, in the past, done a number of projects with BBC Radio 4 drama in London and RTHK3 in Hong Kong – original pieces, abridged versions of books, as well as reading my own short stories or excerpts. So when Audible approached me last year to do an “Original” for them (i.e. a project that would be exclusively audio and for their subscribers) I jumped at the chance. I have a good and loyal audience for my old China true crime stories so let’s see if it is migrating to audio too, and whether I can find any new fans?

We’ll find out soon enough. My 12-part Audible Original Murders of Old China “drops” (as they say) on December 4th. You can buy it to download (cash or credits) or, if you’re an Audible subscriber, use one of your monthly credits to buy it. It’s about the length of an average book (approx. 73,000 words), 12 chapters, 12 murders and a bonus discussion of some of the issues thrown up by the crimes at the end. They’re all murders involving foreigners in China in the first half of the twentieth century; all of them also provide an insight into one or other aspect of modern Chinese history; and I’ve discovered something new (not known by the newspapers, cops or courts at the time) every time. And I get to narrate the series of cases and my investigations myself rather than use an actor. 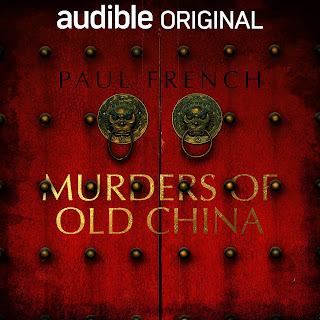 I have to say it was a challenge, it was fun, it’s a nice fast turn around – I only signed the contracts a year ago. I hope readers who’ve liked my other old China true crime books will not be disappointed. But an audio project, an Audible Original, is a very different sort of writing from a traditional book. So here’s five key tricks I learnt:

1)   There are no footnotes. There’s no taking some slightly boring but essential fact and slipping I away in a foot or end note. With an audio project you have to explain everything in the text and it can’t be boring. This is not as easy as you might think. I was surprised with how often a necessary explanation of some historical point could not only be rather dreary but also very distracting for the listener. Audio writing has to be script like tight, but you can’t skip corners either. I’ve always liked to think that my books can he history lessons disguised as a good crime stories – this project was a real test of that.

2)   You have to write as you speak. That means using grammar to help you – pauses for breaths, sentences not running on too long. You need to pay attention to the rhythm of the sentences and phrasing. Timing and rhythm are important when writing something that is primarily designed to be read out loud. Going through a fist draft I found myself encountering sentences that left me struggling to take a breath – something that doesn’t happen ‘in your head’ when reading to yourself.  Keep sentences to around 25 words.

3)   It’s essential to stay on-point. With an audio project there’s no time for charming meandering or juicy little side snippets (unless you’re Alan Bennett!). They have to be ruthlessly excised from an audio script if you want to keep the listener. You’ll know yourself from listening to audio books or talk radio that it’s really easy to lose the drift of the narrator, to suddenly find that you haven’t really been listening for a while and have, literally, lost the plot. With all writing one tip is to picture your reader. But remember that  with audio your reader may well be multi-tasking while listening to you – jogging, driving, eating dinner on a plane, crossing the street and watching for traffic. Their powers of concentration are already somewhat divided without you rambling all over the place.

4)   Beats are really important.  Beats (which in the text can be ellipsis …  in your script this alerts you to wait “one beat” before saying the next line) signal importance, tension, the dramatic reveal. A time shift or gear change can be executed with a well placed three-second pause. Film script writers know this well and use beats to refers to events, decisions, or discoveries that alter the way the story somewhat. Beats can be subtle, or obvious for effect,

5)   Steady on the dialogue. In my books I don’t do much dialogue, but do use third person interior monologue a lot. That means I’m used to writing in that style and thank goodness when it comes to tackling a big audio project. Dialogue is great and a consummate skill for a writer, but remember you’ll have to differentiate all those voices, accents, genders, ages and emotions for the listener. We’re not talking radio drama here and so there isn’t a cast of actors. You’ll have to do it all yourself. It’s tricky enough for trained and experienced actors to keep straight and consistent.