Off to The Script Road, the Macau litfest 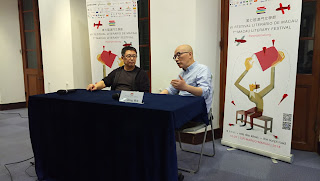 The Script Road in Macau has always had a reputation for being a good place to get invited to – a serious litfest and, most of all, a lot of fun. And so it proved. The first few days focussed on writers such as Ana Margarida de Carvalho (Portugal), Rosa Montero (Spain), Li-Young Lee from the US, Chan Ho-Kei from Hong Kong, and writer and translator, Jeremy Tiang, and children’s author Bao Dongni, Han Dong, Yu Jian and Yin Lichuan from China. The last three, who largely made their name as poets, also direct films, so while I was there we saw Han Dong’s One Night at the Wharf and Yu Jian’s Jade Green Station.

So what were the highlights for me? One was definitely a lively conversation between Rosa Montero and Ana Margarida de Carvalho. Rose talked about growing up as a young woman in Franco’s Spain. Not a single day went by when she wasn’t touched or groped on her way to and from school, Rosa said. The women were the gazelles and the men were the lions. That was just the way things were, and women and girls had to accept it. Then one woman in the audience made an emotional contribution: the crunch comes for women, she said when babies are born. She had lost her career and with it, her identity and her feeling of self-worth in the last ten years, since the birth of her children.

The Script Road is always keen to involve Macau’s children and young people, so some of us were sent off to give talks at schools and the university, where we got a warm reception.

Back in the Old Court Building, where most events took place, another highlight for me was our Authors and Translators foursome: Chan Ho-Kei and Jeremy Tiang, Han Dong and me, in conversation. At one point, this session had been titled: Authors versus Translators, which seemed a good excuse for introducing a bit of lively disagreement into the discussion. Some years ago, Han Dong was often quoted as making critical comments about translation and translators (before I became one of them, I hasten to add). He quoted Robert Frost, who defined poetry as “that which is lost out of both prose and verse in translation.” I maintained that Frost knew nothing about translation, and probably didn’t even speak a foreign language. Han Dong quoted Borges, to the effect that: “The page that becomes immortal can traverse the fire of typographical errors, approximate translations, and inattentive or erroneous readings without losing its soul in the process" (“La página que tiene vocación de inmortalidad puede atravesar el fuego de las erratas, de las versiones aproximativas, de las distraídas lecturas, de las incomprensiones, sin dejar el alma en la prueba.”) I pointed out that even that was not complimentary to my profession, because it implied that even a lousy translation couldn’t kill a book. Han Dong then raised an interesting question which we all debated: why do some writers have a better reputation abroad? Is it perhaps because the translation has improved the quality of the original writing? I cynically believe that it is much more down to market forces and a more effective promotion for the translated version. But it could also be that a genre of writing suits a particular foreign readership better than it does the native audience.

Talking of audiences, I was extremely impressed, in all the sessions I attended and took part in, by the enthusiasm of the listeners and their articulate and well-thought-out questions. Many of them were university students with a genuine love of contemporary literature, which makes me optimistic for its future. The organization of The Script Road is clearly a mammoth logistical problem… and this blog is my chance to say how much I appreciated the people who made it happen: director Hélder Beja, organizers Annie Wang, Claudia Falcão, and many others, including the simultaneous interpreters, and not forgetting the drivers, who had to keep track of the dozens of guests, scattered in hotels all over Macau itself and Taipa, the southern part of the territory. They turned out to be interesting guys in their own right: Dante, a burly Filipino, is manager of the Portuguese bookshop, so had been involved in ordering the excellent selection of books on sale at the venue; Anthony was a Chinese student who, since he’d finished his shift that day, came and joined my lecture at the university. I then meanly put him on the spot by addressing a question to him, since he was the only person in the hall whose name I knew, but he took it in his stride!

It’s a good thing that The Script Road is a thoroughly engrossing experience: there really isn’t a lot else to do in Macau apart from wander around being dazzled by the hotel illuminations and deafened by the noise from the casinos. It’s a mini-Las Vegas. We did manage to explore the local beaches though an oil slick meant we couldn’t paddle; and Taipa old town, which is stuffed with cafes and delightfully laid-back. And the poet and prof at Macau University, Yao Feng, took us around the antique shops, where Yu Jian bought a substantial ink stone, and I made the acquaintance of a fabulous blanc-de-chine Guanyin figure holding a charming baby, Virgin Mary-style. But she had an equally fabulous price tag so I just had to love her and leave her.

As I write, back in the UK, the Script Road continues: the second half of the nearly two-week-long festival has guests like Peter Hessler, Lesley Chang, Miguel Syjuco and Zhang Lijia, to name just a few. I was sorry to have to leave before they arrived, but another literary festival awaited in London: the China Exchange (founded by the late David Tang) is hosting a two-week series of events focussed this year on translation, including a book fair and discussions run by the Guanghwa Bookshop.