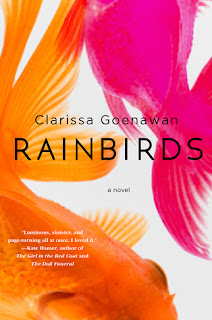 Clarissa Goenawan is an Indonesian-born Singaporean author. Rainbirds is her first novel.  It is set in 1990s Japan. In the small, fictional town of Akakawa, Keiko Ishida has just been murdered. In Tokyo, her brother Ren, the narrator, drops everything, including, temporarily, his girlfriend, to rush to the scene. As he tries to solve the crime, he begins to make sense of aspects of his sister’s life previously hidden from him, and thereby, too, aspects of his own life currently mysterious to him.


The idea for Rainbirds came one afternoon in 2013.

I was in the kids’ bedroom. My daughter was napping, and I was staring at the white wall. And then, the window, and the white fabric I’d hastily clipped on the grill because I'd not bought a proper curtain.

Out of nowhere, a question came into my mind. “What if one day someone I cared about suddenly passed away, and I realized too late I never got to know them well?”

The idea struck me strongly, and I knew I had to write it.

My first plan was to write it into a short story. I thought of a young man who lost his elder brother who lived apart from him and harbored a terrible secret. The quiet brother soon morphed into an elegant, seemingly perfect sister, who had been violently murdered. More and more ideas came, and in the end, I had to tell myself, “This can’t be a short story. This has to be novel.”

I wrote the first draft of Rainbirds during the 2013 National Novel Writing Month - despite its name it’s an international, internet-based creative writing project that takes place every November.

I spent the next two years revising my novel, a year to get an agent and a publisher, and two years on the publishing process. On March 6, 2018, Rainbirds was finally published.

I have given quite a number of interviews linked to publication. During one of the sessions, a journalist asked me, “Have you ever lost someone you really cared about?”

My first instinct was to say no. But then, I remembered someone I loved, whom I lost when I was still a kid. She was my grandmother, my mother’s mom, who I affectionately called Emak.

I remember whenever I had good news - such as when I got a good report card in school - I would always call her first. What I loved about her was how she always listened to me. This may sound like a small thing, but it’s huge gesture for a young child, who grew up in an environment where children were told to always listen to adults.

Years after she passed away, I would visit her house - it now belongs to my uncle and his family. Her fading wedding photograph was on the wall. She was young and lovely, in a beautiful wedding gown. She has a demure smile.

There are so many questions I wish to ask her. Why did she decide to get married so young and have seven children? (As a mother of three, I can’t imagine the chaos.) Why did she agree to let relatives take care of her eldest child? My grandfather is an avid English novel reader; what would she say if she knew I became a novelist? And what about her - did she have any childhood dreams?

But I could never ask her any of these questions. Emak passed away shortly before my 9th birthday. Even though she’d promised we would celebrate it together.

I am often asked, “What kind of book is Rainbirds?” and I find it hard to explain.

Rainbirds opens with the unsolved murder of Keiko Ishida, the narrator’s beautiful elder sister. But rather than a who-dun-it, it’s more about what kind of person Keiko really was, the untold stories she kept hidden until her death, and the empty space she left behind.

It’s a story of grief and loss and love, and ultimately, of acceptance. And to me, it’s also a reminder to treasure the moments. No one lives forever.

Details: Rainbirds is published in hardback by Soho Press – the paperback will follow in June.  Priced in local currencies.