Out of the Blue

In the last quarter of 2019, two books were published by Ateneo University Press’ new literary imprint, Bughaw (Blue), and I lost no time in getting my hands on them. They are, Angelo R Lacuesta’s book of selected fiction, City Stories, and The Collected Stories of Jessica Zafra. It was an occasion to celebrate, to have two such wonderful books come out in quick succession this way—two books from writers I'm likely always going to want to buy.

Both Lacuesta and Zafra are keen observers of the Filipino psyche: they capture current and contemporary Filipino life in all its rich, textured, variegated complexity. Set aside the old cliché—300 years in a convent, 50 years in Hollywood—we’re talking about a country and culture unlike any in Southeast Asia, always set off parenthetically as “different” for its flawed US-style democracy, its proud, resilient, imperfect people who have, all too willingly, inclined themselves along authoritarian political posturing due to the abject failures of the governments between Marcos Martial Law and today’s Duterte-an ipso facto dictatorship. We Pinoys speak English (not as well as we did), work hard, are friendly and happy-go-lucky, in spite of everything. We want our K-pop TV series, our bootleg Hollywood DVDs, our fake designer goods from China and our junky American fast-food, all the while paying barely audible lip-service to being a strong, independent society, one in which family and tragically, family dynasties, reign supreme. There aren’t two better writers than these here right now for acquainting oneself with the country today.

Lacuesta and Zafra again, in contrasting ways, capture both modernity and tradition, approaching and aspiring to first—while still bemoaning third—worldness, cosmo-urban mystique and old-time rural throwback. One slightly younger and one slightly older than me, they each have worked at the fiction mill much longer than I. Their very prose is the real deal, differing and delightful, with one more lingering lush and rich in epiphany, the other more pert with pop and humor, sizzling with satire. Both are more than adept at the weapons they wield, their word and sentence choice, unerring. And in very discrete ways, they are each masters of their craft. 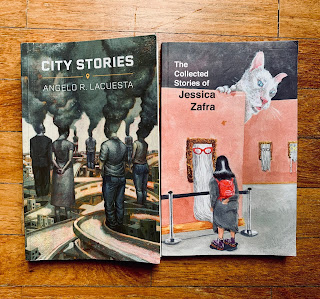 In Lacuesta’s Doc Duende, I hear an echo of my Lola’s story with a tantalizing twist from his always worldly-wise, sometimes deluded, male protagonists. In the voice of the mythical duende (a kind of magic, healing spell casting earth being), he speaks,
“We are an invisible race that lives in a world overrun by the most visible of things. Where we have built ancient cities and monuments, humans only see tracts of open land. Upon it, they build houses and buildings and factories, where they must live and work. We must abide by these, the visible things for we are largely powerless among them.”
Then there are Zafra’s telling tales of the quirky colorful eccentric. Her shorter ones read more like sketch and parody, to which a reader might say, “And then?” only to hear her acerbic retort: That’s it, no more. In later work, she meanders into long to effective, effusive ends. One fave here is “914, 915, 916” a sort of Cine Pilipino meets Twilight Zone with a wild cast of characters living in an old apartment building.
“According to the contract, the monthly rent for each 44-square meter studio was this much, but if the tenant paid rent within the first three days of the month, there would be a 50 percent discount. Therefore the actual rent was half the official amount, hence the clamor for units in the building. And if rumor persisted that the Amarillo Arms was where philandering husbands kept their mistresses tucked away, it only gave the place a rakish, almost attractive air.”

The books share much in common. Both are “collected” short fiction, though one is curated, from a larger body, the other presents the entirety of her short fiction. Both are hefty books—hard to put a dent in—best dipped into at leisure, and then mulled over, over months. Lacuesta has been passionately prolific of pen—with a handful of award-winning short fiction collections published since 2000, including graphic fiction, as well as screenplays. A number of the City Stories I’d read before, yet I delighted in plunging anew into old favorites—Lacuesta’s “Nilda” and “Stigmata” apart from “Leather” and the aforementioned “Doc Duende,” which somehow read more freshly to me this time around, in Bughaw’s polished page layout, thoughtfully designed with an easy-to-read, ragged right-hand margin. Zafra is no mean slouch herself considering the mass mega following of her inimitable brand of also award-winning Twisted columns, and her mission to conquer the world via yayas planted across the globe. I laughed once again at “Manananggal Terrorizes Manila” and “Wordeaters". I'm looking forward to her novel, Age of Umbrage (forthcoming, also from Bughaw), from which I assume, “Ms Liberty” is excerpted, the way I look forward to Lacuesta’s Joy at which I hear he is hard at work.

There were points along my reading of both at which I asked myself, not surprisingly, why I write at all, when there are these two who do it so admirably and in such energetic, almost all-encompassing ways, always bringing to the table huge, raw, bloody slabs of Pinoy-ness, distinct, discernable and thought-provoking beyond the culture. Immensely and scintillatingly readable, these books are excellent, and more like them often languish, unseen by the world’s readers. Oh if only book distributors, local and international, strive harder to make these two books from this university press (which also happens to be my alma mater) available to a wider readership, overseas and indeed, at home. It’s been said again and again, Filipino literature is having “a moment”, especially the work “of the diaspora”. Well, these two books are in their entirety—roots, stems and branches, Filipino—made in the Philippines, none other than at this very moment—time that should extend well beyond measure. —NQDJ

Noelle Q. de Jesus is the author of Blood Collected Stories (Ethos Books Singapore, 2015), which has a French edition forthcoming this fall from Editions do, and Cursed and Other Stories (Penguin Random House SEA, 2019)
Posted by Noelle at 16:09