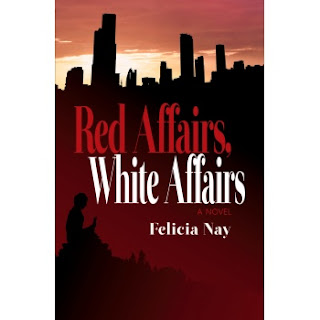 Felicia Nay was born in Germany and spent part of her childhood in Spain. Later, she studied in China and worked in Hong Kong. She now lives again in Germany. Red Affairs, White Affairs is her first novel.

Set in Hong Kong around the turn of the millennium, Red Affairs, White Affairs is told by Reini ‘Kim’ Kranich, a German aid worker who works for an NGO. Hope is the thing with feathers, above the South China Sea as much as anywhere, bird-watching Reini notes about the city. Hope, or the absence of it, features daily in her work with abused Filipino migrant workers, but also in the life of her Chinese friend Virginia, who desperately wants to marry. When Reini learns that Virginia’s mother is dying of cancer, she soon finds herself struggling with her friend’s faith and family values. A lukewarm Catholic herself, Reini’s worldview is further challenged when she meets Ben Chan, a Buddhist fundraiser.

So, over to Felicia to talk about Red Affairs, White Affairs...

How many times have you walked past a Door God or a shrine to the God of Wealth, smiled or frowned over its quaintness, and then walked on? That is, if you are white, foreign, a guest in Chinese culture like me. If you are Chinese, you probably simply walk on.

All of that changed for me when a Cantonese friend of mine made a very personal remark about religion. Without wanting to give away too much, for me it was a haunting moment, disquieting. The moment passed, and, while I continued to ruminate about it, I did not write about it straight away. I was living in Hong Kong at the time, and my life was filled with work and friends.

Then I moved back to Germany, was missing Hong Kong, and looking for an opportunity to make new friends. I joined a creative writing class.  On the first day, the teacher asked us to write about an epiphany, an aha moment. And suddenly, it was back again, that haunting moment with my Cantonese friend.

So, while Red Affairs, White Affairs is about many things, I knew from the very beginning that religion would play a role in it. The thought was daunting: how could I, a foreigner, write about an alien religion? Not to mention the fact that reading audiences for literary novels were supposed to be secular, or at least very sophisticated when it came to dealing with religion. I would have to find a very tasteful way to get the unpopular topic down.

Once I started work on the novel, a lot of other themes crept in: death, single women, the traditional role of women in Chinese society, contemporary missionaries, foreign domestic helpers… I even managed to include cockroaches and Chinese underwear, and I hoped that these lighter touches would make the underlying serious topics more palatable for my readers.

In the meantime, I had started to read up on Cantonese folk religion. I’m a sinologist by training, but nothing had prepared me for the fascinating and rich world that I was soon to encounter: child brides, ghost weddings, nine different kinds of hell. Frankly, I was shocked at what had been kept from me, feeling a bit like the youth who glimpses the adult word of sex, finally.

I suspected a phenomenon that is recurring in China related scholarship: a certain disregard for popular culture. Clearly, folk religion was just a tiny bit too messy to be taught at universities or mentioned in everyday publications. For example, a woman living with a rooster in a crowded Hong Kong estate made headlines when the government stepped in. Researching Cantonese folk traditions for my novel years later, I understood that the rooster probably was her ghost husband. Hong Kong's English language daily newspaper, The South China Morning Post, had either assumed that all readers would be familiar with the cultural background, or had been too squeamish to mention it.

Researching Cantonese beliefs and traditions, I had several of these epiphanies, and I often wished that I had known some things earlier. For example, there used to be a custom of keeping child slaves (muijai) in the Pearl River Delta and Hong Kong until the beginning of the twentieth century. In a sense, they can be considered precursors of our contemporary South Asian domestic helpers. An outlawed historical custom is not an excuse for ill treatment or demeaning working conditions today (and here I always hasten to add, in defence of my friends, that not all domestic workers are abused by their employers), but social memories are long, and it is interesting to note that such a cultural precedent exists.

Writing the story, I transferred some of these aha moments to Reini, my narrator, a German expat who works for an NGO supporting Filipino domestic workers. Even as I was writing it, I knew that some of what I was describing was disappearing, or at least losing public visibility and viability. An American friend of mine who has spent her whole adult life in cultural China echoed this when she said that my novel reminded her of things she hadn’t thought about in years. That is one of the reasons why the novel is set almost twenty years in the past, a Cantonese woman in her mid-thirties today will be different from Virginia, my Chinese protagonist alongside Reini. Still, many age-old concerns remain the same, such as the filial obligation to marry and bear male heirs.

There also is a certain privacy inherent to religiosity, and hence unease when it comes to talking about it. Death, of course, is a preeminent taboo topic, and very much so in Chinese culture. Linked to this are feelings of backwardness and shame associated with traditional religious practices. While foreign China watchers gush about the wealth of traditions preserved in Taiwan, where there was no Cultural Revolution to wipe out folk religion, Hong Kong has never branded itself as traditional.

All of this created a feeling of trespassing as I continued to work on the novel and observe Cantonese religious life during return visits. It was only fitting when, my novel almost finished, two Cantonese friends whom I asked to vet the book refused, perhaps because I had announced right away that it included death and religion. On the other hand, the taboo fuelled much of my story, meaning that my narrator couldn’t have frank discussions about religion with her best Chinese friend and instead tried to grapple with things on her own.

This feeling of trespassing has remained with me until today, and I can only hope for my novel that any inadequacies of my white, Western gaze will be offset by my love for Cantonese culture. If you are a guest in Chinese culture like me and my novel inspires you, next time you pass a shrine, give the Door God a little nod.