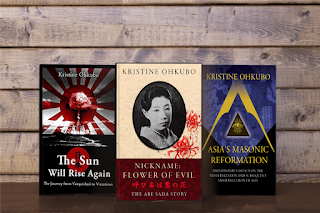 Kristine Ohkubo is a Los Angeles based traveler, blogger, and Japanophile.  Her frequent travels in Japan enabled her to write her first book, A Blogger’s Guide to Japan, published in 2016. In 2017, she released The Sun Will Rise Again, a historical study of the Pacific War written from the perspective of the Japanese people, both those who were living in Japan and in the United States, when the war broke out. In 2019 she followed up with Asia’s Masonic Reformation, which examines the influences of Western culture and Freemasonry on the Westernization and subsequent modernization of China and Japan. Her latest book, Nickname Flower of Evil, tells the story of Abe Sada, one of the most infamous murderers Japan has ever known – a Showa era geisha who was both a victim and an aggressor, a woman struggling amidst a strict patriarchal culture and a rapidly changing social system.

Here, Kristine discusses her books, in reverse order of publication…

Nickname Flower of Evil
When Japan transitioned from 264 years of rule under the military-led Tokugawa Shogunate to the restoration of imperial power during the Meiji era, it embarked on a path of rapid modernization. This modernization came at an enormous cost, a cost that was borne primarily by the already repressed members of Japan's society – the impoverished rural women, the female factory laborers, and the sex industry workers.

As the Japanese government propelled the country toward industrial revolution, it invested heavily in industries such as silk and cotton production, railways, and mining. This created a critical need for laborers. Most of the industrial workforce came from the rural farmlands.

The women who once helped their families on the farm were redirected to work in the factories. By 1900, 250,000 women worked in the textile industry. A little over a decade later that number swelled to an estimated 800,000. These rural women were often underage, underpaid, and indentured to the factory owners.

Upon being recruited by the textile mills, the women’s families were paid a sum of money which they could apply toward paying off loans and defraying the cost of their living expenses. In reality, however, these advance payments were loans from the factory owners that the women were obligated to pay back.

The women typically worked under grueling conditions and labored twelve to fourteen hours a day. They were often subjected to punishment by the factory inspectors. The punishment came in the form of fines and physical abuse and were applied to those women who appeared to have slowed down the production line or who seemed to be inattentive.

Many of the women attempted to run away from the factories, but they were chased down, captured, and returned to the factory owners. Several women committed suicide.

After the textile industry, the second largest employer of women during the Industrial Revolution was the sex industry. Prostitution was legalized by the Tokugawa Shogunate in 1617, and fathers had the right to sell their daughters to brothels. Many families facing poverty, famine, and crop failure often resorted to selling their daughters to brothels in an effort to ease the family’s financial burdens.

The rapid industrialization of Japan created a largely disproportionate ratio of men to women in the factory areas which fostered the growth of the sex industry.

While much of the Western world was witnessing the sexual awakening and empowerment of women during the roaring twenties, Japan still adhered to the restrictive social and legal policies that it had adopted for women during the Meiji era. The line between factory workers and sex industry workers became blurred when considering the powerlessness of the women who were forced to accept the decisions made by men about their lives and their bodies.

Born during the latter part of the Meiji era, a former geisha and prostitute, Abe Sada was elevated to celebrity status after committing the most heinous crime in 20th century Japan. After being convicted and imprisoned for strangling and emasculating her lover with a kitchen knife, she became the subject of countless articles, books, and movies.

Although she remains very famous in Japan, not much is known about her life outside of Japan except for what was depicted in the sensationalizing film, In the Realm of the Senses. Of the countless works produced about her, very few have dared to faithfully examine her life, delve into her psyche, or to discuss the series of tragic events which pushed her to commit the crime.

In Nickname Flower of Evil (呼び名は悪の花): The Abe Sada Story, you are invited to travel back to the newly modernized, male-dominated, misogynistic, post-Tokugawa era in Japan, where women were deprived of their economic independence, subjected to the will of the household heads, and sold into the sex industry. This was the world into which Abe Sada was born, raised, and forced to survive.

Asia’s Masonic Reformation
This examines one of the least understood organizations of all time, Freemasonry. Often shrouded by mystery, misinformation and conspiracy, two common beliefs endure among all Masons. The first is that each man has a responsibility to improve himself while being devoted to his family, country, and fraternity. The second is that each man has a responsibility to help make the world a better place. These beliefs have been the basis which have enabled Masons to be catalysts for change throughout history.

As Western culture and influence penetrated the far corners of the world, Freemasons were notably at the forefront, ushering in rapid change, modernization, and enlightenment. Was this merely coincidental or was it by design?

Readers are invited to follow along and reach their own conclusions as everything from the Opium Wars in China to the Meiji Restoration in Japan are explored in detail.

The Sun Will Rise Again
Here I explore the grim realities of war, politics, racism, and blind devotion. I tackle various questions including: what prompted the Japanese to wage war with the United States? Was the attack really a surprise or was it a carefully orchestrated event by Washington to anger the American public enough to want to go to war? Did the Japanese government truly believe that they would prevail against the military might of the United States?

A Blogger’s Guide to Japan
I wrote this from the perspective of a travel blogger and a frequent visitor to Japan, the book provides the history and background information for each destination to help travelers develop a greater appreciation for the sites they visit.

Details:  Kristine is an indie author.  Check out her webpage here.
Posted by Rosie Milne at 18:45