In this post I talk about my fascination for India, and my research into the British Raj for my novel 'The Foundling's Daughter.'


I’ve been fascinated by India from an early age. My father was posted to the North West Frontier – now the border between Pakistan and Afghanistan - in the 1930s, and used to tell many stories from his time there, as well as speaking fluent Urdu. This kindled my interest in the region.

On trips to India in my twenties I was struck by how British influence still pervaded, largely in the buildings and architecture, but in other ways too – in the bureaucracy encountered in booking a rail ticket, in the love for the English language, and in some traditions - the love of cricket, and tiffin in the afternoons. In some of the towns I visited – Agra and Jaipur for example – there were many forlorn, abandoned bungalows where British officials would once have lived, now derelict and crumbling, their gardens overgrown, together with churchyards full of graves of the British who had met an early death far from home. This got me wondering about the lives of those people – what must it have been like to make a home in such a different culture, so far from your roots, often in lonely and difficult conditions?

This fascination led me to research into the lives of the British in the Raj and ultimately to write a novel set in this era. My first research wasn’t really research at all. In the 1980s there was a passion for the nostalgia of the Raj, reflected in films such as ‘Passage to India,’ ‘Heat and Dust’ and the wonderful TV series ‘Jewel in the Crown.’ I thoroughly enjoyed all of these and went on to read all the novels I could about British India. In particular,‘The Raj Quartet’ by Paul Scott, on which the ‘Jewel in the Crown’ is based, is a huge source of information about the Raj and a starting point for further research.


When I started to write fiction in earnest, I knew I had to set it, at least in part, in British India, so I read as much as I could on the subject. This was in the very early days of the internet, before Wikipedia, so I had to fall back on what the local library had to offer. I found a surprisingly rich seam of information in an ancient, shabby book called ‘British Social Life in India 1608-1937’ by Dennis Kinkaid, written in 1938. This provided me with a lot of information about the British in India. A more modern and accessible book I read at that time was ‘Plain Tales from the Raj’ by Charles Allen. It was along similar lines and packed with personal anecdotes. More recently I’ve read a fascinating autobiography by M.M.Kaye ‘the Sun in the Morning,’ about her childhood in India.

It was interesting to read that until the Suez Canal was built in 1869, few women accompanied their husbands out to India, but once the journey was quicker and easier, the advent of the Memsahib meant less interaction with the local people and a more formal retreat to British traditions in the home. The British often lived in bungalows on ‘stations’ with verandas running round the building and rudimentary bathrooms underneath. In early days they would have a punka-wallah to pull a large fan on a string to cool the air. Inside their homes they often tried to replicate a middle-class British house and outside to cultivate their gardens to look like home. Since they moved around a lot, they had row upon row of potted plants that were easily transportable. They had many servants – since labour was cheap, but also because due to the caste system it was necessary to employ different people for defined tasks. This meant that the average memsahib had little to do and as a consequence was very bored. The Club was therefore a lifesaver for many – a place to go and meet people, to play tennis and above all, to drink. If they lived in a city or on the plains, they would spend the hot season in a ‘hill station’ such as Simla, Darjeeling, Matheran, Ootacamund (or Ooty).

All this research inspired me to write a book in the form of a diary of a bored and reluctant memsahib. This was first called ‘Shivaji’s Ladder’, but, sadly, was never published. However, more recently I incorporated a lot of the material from the diary into ‘The Foundling’s Daughter’ a mystery about chilling events in a 1930s orphanage, partly set in British India. I self-published the book in November last year. Readers have commented that they enjoyed being transported to 1930s India through the diary, and the book it is currently hovering near the top of the historical Asian fiction charts on Amazon.UK.  It is available at this link 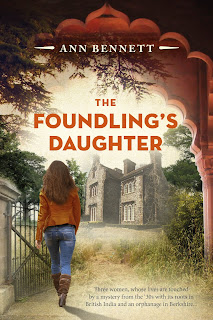