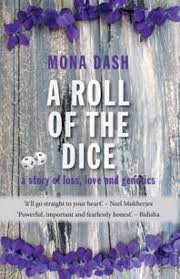 Viewpoint invites authors to write about anything they want, as long as it's of interest to readers of Asian Books Blog.

Here, Mona Dash talks about leaving her native India, to save her child's life. Her son was born with a rare, genetically inheritable disease, SCID (severe combined immuno-deficiency). After his diagnosis, she set out for London so he could be given specialist treatment. She has written about her experiences in the memoir, A Roll of the Dice: a story of loss, love and genetics. This publishes next Monday, April 22.

Mona still lives in London, where she combines motherhood, and work in the technology sector with writing fiction and poetry. Her work includes the novel Untamed Heart, and two collections of poetry, Dawn-drops and A certain way.  In 2016, Mona was awarded a poet of excellence award in the upper chamber of the British parliament, the House of Lords.  Her work has been widely praised and anthologized. In 2018, she won a competition established to encourage and promote British Asian writers, the Asian writer short story competition, for her short story Formations.

A Roll of the Dice describes the ups-and-downs, the shocks and support, the false starts and real hopes of a mother with a sick child. Mona humanizes the complexities of genetic medicine, and writes her story of genetic roulette without self-pity. Her memoir contains valuable information for couples facing infertility and complicated pregnancies, for parents of premature babies and of children with SCID.

So, over to Mona…

My baby boy was born several years ago in Kolkata, India. He was perfect; healthy, feeding well, big for his age, and even slept all through the night. As a young, career-oriented woman, fresh out of university and armed with an MBA, my worries were simple and pragmatic: how could I get back to my busy job which involved travelling across the globe?  How could I regain my pre-pregnancy weight? How could I get the best possible childcare for my baby?

Like most women, these were the practical challenges I expected to face and all I was really prepared for.

At four-and-a-half months of age, my son started becoming unwell with a high fever and an unexplained rash all over his little body. As young parents, we were not prepared for something like this. Indeed, who is? After repeated visits to our paediatrician who was clueless, we visited a string of doctors, each one more highly paid than the other, each one with longer waiting lists and a greater reputation. We ran from pillar to post, desperate to find out what could be wrong. After two whole months of playing tag with doctors, we decided to leave Kolkata and go to a specialist hospital in South India in search of a diagnosis.

We were given a horrifying answer. In my genes is a devastating, fatal condition, SCID which has a fifty percent chance of being passed from mother to son. The outcome is as uncertain as a roll of the dice. SCID is so rare and complex that treatment is available in only a few countries across the world. “Leave this country if you want to save your child”, the doctors in India told me.

India is increasingly regarded as a centre for medical tourism with affordable, quick, high-quality medical care, well-qualified doctors who trained abroad and excellent diagnostic procedures. So, when I tell people that a medical condition is not treated in India, I am met with incredulity and a kind of affront. How could I be so unpatriotically negative? Perhaps, as of 2019, there are some successful treatments for SCID. I don’t know. However, I do know of families who even in the last two or three years have lost not one, but two children, simply because of a lack of available treatment. Nor does the rest of Asia offer too many options, either, with the possible exceptions of Dubai and Singapore. The treatment centres tend to be in Europe or the US, so seeking treatment means uprooting your family and going to live in a foreign country which is way more expensive and whose culture is very different from your own.

The issue of belonging is important here. While my memoir is first and foremost about the medical and emotional challenges on my journey to motherhood, it is also about adapting to a completely new and different country, while not cutting myself off from my own roots. It is, in that sense, a story about migration.

In the current climate in the UK with the threat and chaos of Brexit, when questions about race and identity have become urgent, one inevitable question leaps out of A Roll of the Dice: how easy is it to endure a very difficult experience in a country you are not born in?  The answer, and this is the truth, is that being an Asian, or a foreigner really made no difference to me personally. Motherhood is universal, a child being unwell is a grief and a pain anyone can understand. The medical community I met in the UK, in the many hospitals, both government and private, was a mix of ethnicities - English, British Indian second generation, British Indian first generation, British African, European - and among all those many doctors and nurses, not once did I receive anything but acceptance and kindness. When you go through a period of intense vulnerability, you are at your most sensitive, so both rudeness and kindness is felt more acutely.  I hope my story encourages Asians living in the UK. This country can be kind!

I wrote this book as memoir, not fiction. As a fiction writer, I know I could have invented characters and embellished my story. There were three reasons I didn’t want to do that. One is that, as they say, truth is stranger than fiction. As fiction, critics would perhaps dismiss my story as improbable and unlikely to happen to one person! Secondly, I hope it makes anyone going through a challenge feel a little less alone, and know that there is always hope. At its heart, the memoir speaks of hope.  Lastly, I really hope in some small way, this memoir - the only one written about SCID and other rare conditions such as PPROM (preterm premature rupture of the membranes) - helps increase awareness of such medical conditions. I hope it stresses the importance of screening newborns for conditions such as SCID which, as of 2019, is mandatory in all states of America, but not yet in the UK where a pilot scheme is to be introduced this year. Professor Bobby Gaspar, of London's Great Ormond Street Hospital, who has written the introduction to my memoir, is involved in a newborn screening for SCID trial.

This is a story of loss, love and genetics. A story about medicine meeting miracles, and about overcoming challenges which are outside your control. It is a story with a happy ending but readers will have to wait to find that out!

Details: A Roll of the Dice: a story of loss, love and genetics is published by Linen Press, (UK) in paperback and Book, priced in local currencies.