A New Kid on the Block for Literary Nonprofits 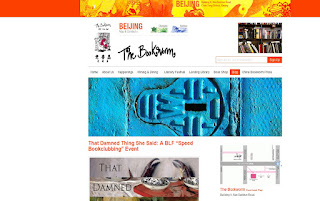 Paper Republic is proud to announce that it is now a UK-registered charity no. 1182259. Paper Republic was set up by Eric Abrahamsen in 2008 as a blog site where we translators of Chinese literature could share our thoughts, our joys and our frustrations. Since then we have developed a variety of other activities and gained a gratifying degree of recognition: "If you need to know something about Chinese literature you start here," said one of the judges at the 2016 London Book Fair Literary Excellence Award, where we were runners-up. "Paper Republic demonstrates superb collaborative working across a number of platforms including their growing networks, their redesigned website and innovative live activities.”

In the beginning, we could write what we wanted, just for ourselves. Here's a flavour of the early days. Eric Abrahamsen: The unspeakable bi. “… on a bad day, I'm trying to translate níubī. On the face of it, niubi is not untranslatable at all: the characters niu and bi can be rendered into English with great precision by the words – and I beg your pardon – 'cow pussy', niu being the zoological reference, bi the anatomical. " Pamela Hunt: Scatological Humour in Zhu Wen and Han Dong. "Why are there so many modern Chinese novels in which, as Cindy Carter put it so nicely in an earlier post, 'faeces play a starring role'? Any reader of contemporary Chinese fiction will tell you that you don't have to look very far to find a joke about bodily functions." You begin to see a trend emerging? Don't shoot the translator.

If blog posts on translating rude words don't appeal, there are many more posts in our archives on more elevated topics, for instance, Never Fully Dressed with Just a Simile  by Canaan Morse; and an account of my own about how I reduced 3,000 years of translation from and into Chinese, including the translations of the Buddhist canon, to an hour's talk to entertain a roomful of booklovers with no knowledge of Chinese.Just put a translator's name in the search box and a list of their contributions comes up.

In any case, Paper Republic quickly became something more than a space for personal musings. To quote Eric: "In a sense, all we wanted was to be able to translate the books we love, and to see those books published and read. Over time we realized that the single greatest obstacle to that goal was a lack of information about Chinese literature among publishers and readers abroad. Nearly all of what we do is aimed at filling that lack: by providing context and background on China's various authors and their works, and in many cases by making those works available to read directly.”

We are still a translators’ collective, with Eric Abrahamsen , Chen Dongmei (based in Seattle), Nicky Harman and Emily Jones (UK-based) and Dave Haysom and Yao Lirong (Beijing) as the core team, and other people who come in on specific projects. We have a database of authors, translations and translators, we regularly post translation news and blog posts, and collaborate with the Leeds New Centre for Chinese Writing to run translation competitions. And we run live events: one was "That Damned Thing She Said": four short stories from China to celebrate International Women's Day, part of London's Free Word Centre Wanderlust series, in 2016. This mini-book club was so successful that we replicated it in Leeds UK, and in the Beijing Bookworm (pictured above).

As for translated stories, we launched Read Paper Republic in 2015. For the first year, we published a free-to-view translated short story every week, and we have since added to them with mini-series. In February 2017, we collaborated with the Global Literature in Libraries Initiative to write and post twenty-eight daily articles on Chinese literature in translation. And in 2018, we secured funding and support from OWMagazine (单读) and the Los Angeles Review of Book's China Channel to venture into literary non-fiction with Dispatches Series One andTwo.

Our aims remain the same: we want readers to know what's good, what's available to read in English already, and what isn't – but is crying out for a translation. And we want to encourage the highest standards of literary translation, so we aim to provide educational opportunities, information and resources, as well as mentoring support.

You may notice that fund-raising wasn't on the list of our activities. In fact, with the exception of a generous Arts Council England grant in 2009 and, more recently, support for our literary non-fiction translations, we are still running on volunteer labour. We are planning a fund-raising campaign, to pay for projects and for an admin worker, but in the meantime, if you have any brilliant ideas or contacts you think we could use for fund-raising or would like to discuss supporting one of our projects, please contact me on info@paper-republic.org fao Nicky Harman.

And even if you don't, feel free to explore our blogs, and our translated short stories, and follow the Our News, Yours News column on https://paper-republic.org/.