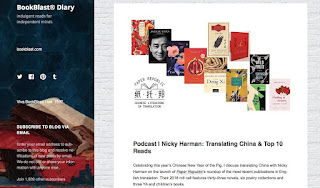 I had slightly mixed feelings when Georgia de Chamberet and I began our podcast for Bookblast. On the one hand, it was a great opportunity to talk both about the literary translation website I work on, Paper Republic, and the range of novels that feature on our 2018 roll call of Chinese translations into English. On the other hand, Georgia’s questions required some serious thought and I felt I was in danger of making wild generalizations (perhaps inevitable when you’re talking about a country and a literature as big as China). What follows is an excerpt from our Q+A. I hope you’ll find it thought-provoking enough to listen to the full podcast.


Georgia: Is there greater recognition and curiosity nowadays about writing from a non-English speaking world that is 4,834 miles away from the UK?
Nicky: Oh, very much so. Twenty years ago, I could only find three novels translated and published in the US and the UK in one year. In 2018, it was more than ten times that, not counting poetry collections and some young adult/children’s books as well.

Georgia: When does contemporary Chinese literature begin?
Nicky: Well, that’s both an easy and a complicated question. Most of the books that appear on our roll call for last year were written and published post-1980s, when there was an explosion of new writing in Mainland China, after the end of the Cultural Revolution. But, working backwards, there is a lot of influential writing that dates from the early twentieth century, and in 2018 there was a new translation from one of the greats from that period, Eileen Chang (Zhang Ailing). And earlier still, there are the Chinese classics, still read and loved, like Dream of the Red Chamber, also called The Story of the Stone. There are still new translations of classics coming out, for instance last year, The Romance of the Three Kingdoms.

Georgia: How is the dark side of socialism exposed in Chinese literature?
Nicky: Ouch, the first of the tricky questions. I think I’d re-phrase that as ‘the dark side of society’. For instance (and there are many examples I could pick from): Yu Hua, Yan Lianke and Ma Jian all had political satires out in 2018. And then there’s Chen Xiwo, The Book of Sins (2014), whose novellas use sexual dysfunction as a metaphor for social corruption. And A Yi – his A Perfect Crime (2015) and forthcoming Wake me up at Nine in the Morning, both Oneworld, feature a rogue’s gallery of psychopaths and other social misfits.

Georgia: What about women writers?
Nicky: In our roll call of 2018 translations, only half-a-dozen of the writers are female, out of over forty if you include poetry collections. This is shameful. It also follows a consistent trend over the last few years. I recently did a tally of literary translations from all languages, from an American database, Three Percent, which comes out annually. The 2017 database lists 532 works. 290 works were written by male authors, but only 158 by female authors. (For 83 works, the gender was not identifiable.) The figures for Chinese to English literary translations are about the same: in 2017, an overwhelming majority were written by men. That said, the women writers who appear on our 2018 roll call list are crackers: the great Eileen Chang, Can Xue, Chi Zijian, Sheng Keyi and Yan Ge. And they are representative of the high quality of large numbers of women writers in China. So the reason why they are overlooked when translation rights are sold is not clear, but it’s something that at Paper Republic we’re very aware of. In Read Paper Republic, our short story and essay series, for instance, we do our best to promote women.

Georgia: What strengths are drawn by Chinese writers from the richness of their cultural background and national identity? Are the books available in the West just translated from Mandarin Chinese or are other regional dialects represented?
Nicky: Two of the authors who appear on our 2018 roll call draw heavily on the wealth of regional dialects in Chinese. Yan Ge incorporates a lot of Sichuan dialect in her novel The Chilli Bean Paste Clan. And Jia Pingwa writes (and speaks) in Sha’anxi dialect. Jia also writes about the culture of rural Sha’anxi, and a way of life which is a complete contrast to the twenty-first century Chinese cities where many of the villagers he writes about end up as migrant workers.

Georgia: Is writing dystopian fiction and sci-fi a way of avoiding Big Brother’s eye of power?
Nicky: No, I don’t think so. After all, scifi novels are subject to the same scrutiny by publishers and censors as any other genre of novel. I think there are other reasons why scifi has taken off in China and has had such success in translation too. Stanley Chan (Chen Qiufan) put it like this in this blog for London’s Southbank Centre last year:
“Science fiction of every culture is bound to have its own traits, reflective of its language and culture. The biggest characteristic of China is the drastic transformation and fracture between different social forms. In a hundred years, China experienced the progress that the West took many centuries to complete. From the late Qing dynasty to the Republic of China, to the founding of the People’s Republic of China, to learning from the Soviet Union, to the reform-and-opening-up of the 1980s, every stage lasted only about a few decades. There is something very science fictional and fantastic about this very drastic social transformation.”
……………………………………….
And on we talked, ranging far and wide. To hear more, click here for the full podcast, and here for more Bookblast podcasts.