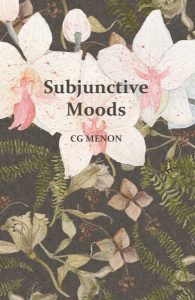 Subjunctive Moods deals with tiny moments of missed connection and of realisation: the heartbeats by which we all grow up. The stories span generations, continents and cultures and feature both Malaysian and Indian folklore.

Subjunctive Moods contains stories set in Malaysia, Australia and Britain. One of my primary focuses in all these pieces is identity: what is it that makes us belong to a particular place, culture or family? The touchstones of identity are different when seen through an external perspective; the most important bonds often stem from memories and experiences which are overlooked by others.

I believe we all have pre-conceived notions about what other cultural groups are like – “these people like music”, “those people tell stories”, and it isn’t until we’re taken out of our own familiar places that we begin to realise how reductionist these beliefs are. Going beyond our own boundaries makes us re-examine what home feels like, and to find a way to carry it with us. I think this is what makes folklore so pervasive, and its stories so compelling. Myths and their re-tellings teach us about how to be part of a community and how to grow. You don’t need to be familiar with the external trappings of the myth – the talking fish, the demon-without-a-nose, the vampiric woman – to understand what it’s telling you.


I drew quite heavily on myth and folklore in the pieces in Subjunctive Moods. Malaysian identity is complicated – is defined, to a certain extent – by race, and I wanted to mirror that in my stories. In “Watermelon Seeds”, for example, an Indian and Chinese girl in Malaysia feed their imaginations on pontianaks from Malay horror movies, as well as Ratty and Mole from Wind in the Willows. Growing up, for these children, is an uneasy crossing from one identity to another. Aging, for them, represents a shift in the myths they’re most responsive to, and an answering shift in their own identities.

In another piece, Seascapes, I explore the British Asian world. The main character in this reaches a crisis point in her life – an inability to belong – and responds by turning to the monsters and demons she related to as a child. She re-interprets British myths, turning these inside out and eventually transmuting them all the way back into the stories she’s most familiar with.

This borrowing and re-interpreting is something we all do. It’s a kind of stripping back, a way of getting our point across by dressing it up in different clothes. There’s a playfulness to the whole thing, a sense of joy in choosing different words and seeing where you end up. It’s this concept of play and exploration that first motivated me to return to writing stories. I wrote a fair amount as a teenager, but then turned to science. These days I’m a mathematician, with a PhD in pure maths, and the mix of rigour and creativity in my mathematics is precisely what I draw on when writing stories!

I believe for those of us who come to writing via a non-traditional path (like the sciences), this transition is another type of boundary-crossing. We all have our own self-identities, our own stories that we tell about ourselves. Growing up means re-telling those stories, re-interpreting them because as we get older perhaps we don’t belong just where we thought we did. We’re mathematicians – not writers – or vice versa. We live in one country and write about another and home, if anywhere, lies somewhere in between the lines.