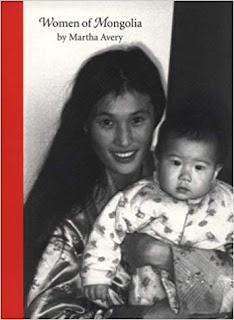 Aurelia Paul recently graduated from Boston University, where she was studying comparative literature and Chinese. In her fortnightly column Student bookshelf, she shares responses to texts she read in her classes.

Here she discusses Martha Avery’s book Women of Mongolia, an interesting combination of interviews, narration, and black and white photographs.

Martha Avery has organised the book into a large number of sections, for example, ‘Buddhism and Tradition’ and ‘Professional Women’. In her preface, she explains that, “the women whose lives appear here could be viewed as ‘country women’ and ‘city women,’ except that many of them fall in between.” Often, in countries that have high rates of rural to urban migration people get grouped into firm categories depending on their location. To do this, however, is to ignore personal migration histories and transitional periods. It is one of the things I like the most about Avery’s book that she decides to oppose the harsh divisions of rural/ urban and instead focus more on other cultural factors.

The first woman who Avery presents is called Inkhe. She shares with readers her recipe for cooking marmot. This recipe reveals to us both the impacts of globalization on some Mongolians and the continued importance of tradition in Mongolia. Inkhe speaks with Martha in English, and in the middle of the recipe, she describes a specific marmot bone as being ‘chic’. This use of an informal word that is strongly related to commercial Western fashion advertising shows that Inkhe probably has contact with some sort of Western media. At the same time, Inkhe describes in detail some traditional Mongolian medicine practices. For example, she tells us that if we suffer from arthritis, we should wrap the skin of the freshly-killed marmot around the affected area and leave it there for two to three days. A lot of these practices display a strong resourcefulness; no part of the animal is wasted. Something else that seems more traditional about Inkhe is her instruction regarding the shoulder blade of the marmot. She says this part is “the choicest piece. It goes to the head of the family, who cuts the meat off the bone and divides it.” This shows that Inkhe still places importance on the traditional hierarchical family structure.

Along with experiencing increased access to global media, Mongolia is undergoing other changes as a consequence of its independence from Soviet rule. Many of the women discuss what this transition means for them and for others in the country. Baljinnyam worked as an ambassador for Mongolia to the UN. She offers her perspective on the changes: “Before, you did not see beggars on the streets…Education was paid for, so people did not worry so much about their children’s’ futures.” Baljinnyam points to the social costs of transitioning to a free market economy. In fact, most women say that they can afford less now that the system has changed. Some Ulaanbaatar residents are facing homelessness, which is even more detrimental in a city that lacks the social infrastructure to help with these new problems. Baljinnyam also speaks about the psychological effects of independence: “Old people have felt enormous trauma. They had this ideal, working for socialism all their lives…They never expected that at the end of it there would be nothing at all.” Mongolia’s transition was very abrupt, as the state ideology changed almost overnight. This led to a lot of disillusionment, and Baljinnyam hints at feelings of meaninglessness when she says there is “nothing at all” now that socialism is no longer in place.

The transition has had some positive effects for those who live on the steppe and in the Gobi, as strict Soviet land laws have been abolished. This that means nomadic people can occupy whatever empty land they wish to. I read two accounts from Gobi women in the book, and although they shared the same home landscape, their ways of living were very different. The first woman, who is anonymous, lives with her son in an isolated ger (yurt) on a rocky slope. There is a photo of her ger, and the land around it looks shockingly desolate. There are no trees or other plants, and the terrain is very flat without any obvious roads. The sky has no clouds in it, and just looking at the picture makes me feel cold. Martha tells us that this woman is a ten-minute drive away from the nearest ger, which her sister lives in. The woman doesn’t have a car, and the distance by horse could take nearly an hour. Her and her young son only have each other for company most days. The second woman, Sunjidma, is a goatherder. She interacts with many people everyday. Her ger is situated in a small community, and there are six gers in total in her group, with about six people in each ger. Many of them belong to an ethnic minority called the Xarchin. They live in a somewhat collectivist space, with all the animals kept together. There is a photo in the book of Sunjidma’s daughter and son riding a pony with a child from another family, and they look as if they are close friends. Reading about these two women with such different lifestyles revealed the diversity of Mongolian nomadic life, which can often be homogenized in literature.