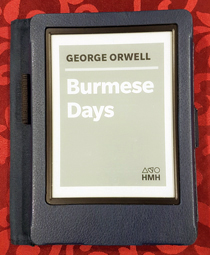 This post is about Burmese Days, the story of an Englishman living in a remote town in Burma where the European Club’s members can almost be counted on one hand. The novel communicates an anti-colonial message by showing the colonists to be proud, ill-mannered, idle, drunk, driven by greed and ultimately self-destructive.

Burmese Days is not as well-known as the dystopian novel 1984 or the allegorical novella Animal Farm, but comes from the same sharp pen. The world depicted in the novel, Orwell’s first, is ugly and dark but occasionally reveals moments of great beauty.

See below to find out what you need to know to decide whether you should read Burmese Days, or what you should know about it even if you never do!


Where and when is Burmese Days set?

The story is set in the 1920s in the fictional town of Kyauktada, a “fairly typical Upper Burma town” of four thousand people, located on the banks of the Irrawaddy River at the far end of the railway line leading north from Mandalay.

The climate is tropical, with a monsoon season that brings regular heavy rains for half the year. The novel begins in May, the hottest, driest part of the year, when the only relief from heat, apart from the limited quantity of ice transported in small quantities for the Europeans’ drinks, is the flapping punkahs (cloth panels used as fans, powered by human labour).

No doubt the author experienced both the ugliness and the beauty he writes of. The town of Kyauktada was based on the real town Katha. Eric Arthur Blair, the Englishman better known as George Orwell, spent almost five years stationed in several locations in Burma, mostly in the Irrawaddy River delta, between 1922 and 1927. The last place he was stationed was Katha.


Who are the seven members of the Kyauktada European Club?

What is happening as the story opens?

U Po Kyin, an obese, lecherous, murderous Burmese criminal, has wormed his way into a secure post within the colonial government. To cross him is to anger a dangerous crocodile. He intends to atone for his misdeeds someday by building magnificent pagodas, but first he wants to cement his earthly position. To that end, he is plotting a misinformation campaign against Dr. Veraswami, the Civil Surgeon and a friend of Flory’s.

Meanwhile, Mr. and Mrs. Lackersteen’s orphaned niece Elizabeth is on her way to Burma, for lack of anywhere else to go. It would be best for all concerned if she could find a husband among the European expatriates in Burma.

It has been suggested that a non-European be elected to join the Kyauktada European Club. Flory’s friend Dr. Veraswami is the obvious candidate, but Ellis finds the idea disgusting, and uses disgustingly racist language to express his thoughts on the subject. Flory disagrees with the united opinion of the others, but doesn’t have the spine to object. He often confides in Dr. Veraswami, yet suffers from acute intellectual loneliness.

Orwell writes of the difficulty of living a lie, and of what lie the colonists are living, and how it constrains and consumes them.


There’s an everlasting sense of being a sneak and a liar that torments us and drives us to justify ourselves night and day. It’s at the bottom of half our beastliness to the natives. We Anglo-Indians could be almost bearable if we’d only admit that we’re thieves and go on thieving without any humbug.


He is liable to poke fun at anyone, be it a jolly racist, an arrogant horseman, or a Burmese doctor.


Mr. Macgregor… had no prejudice against Orientals; indeed, he was deeply fond of them. Provided they were given no freedom he thought them the most charming people alive.

[Verrall] took no interest in Indians, and his Urdu consisted mainly of swearwords, with all the verbs in the third person singular.

In the evening the wounded boy was taken to a Burmese doctor, who, by applying some poisonous concoction of crushed leaves to his left eye, succeeded in blinding him.

Some of Orwell’s descriptions are full of poetry and serenity:

Elizabeth looked up into the branches of the frangipani tree, which the moon seemed to have changed into rods of silver. The light lay thick, as though palpable, on everything, crusting the earth and the rough bark of trees like some dazzling salt, and every leaf seemed to bear a freight of solid light, like snow.

The theme of Burmese Days is that colonialism is inhumane. However, the bulk of the evidence adduced in the novel points to the conclusion that it is inhumane not because it harms the natives but because it corrupts the colonists.

For a depiction of British colonialism in Burma from a Burmese perspective, see Not Out of Hate.
Posted by Lucy Day at 17:01