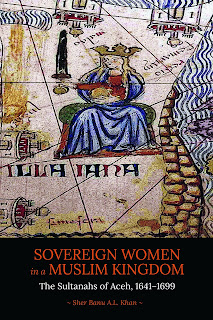 Sher Banu A.L. Khan is an assistant professor at the Malay Studies Department, National University of Singapore. She is the author of Sovereign Women in a Muslim Kingdom: The Sultanahs of Aceh, 1641−1699, which was published in May.

The Islamic kingdom of Aceh was ruled by queens for half of the 17th century. Was female rule an aberration? Unnatural? Indigenous texts and European sources offer different evaluations. Drawing on both sets of sources, Sher Banu shows that female rule was legitimised both by Islam and adat (indigenous customary laws), and provides insights on the Sultanahs' leadership, their relations with male elites, and their encounters with European envoys who visited their courts.

So, over to Sher Banu…

The remarkable fact that a succession of not one but four women rulers of the sultanate of Aceh Dar al-Salam in the second half of the seventeenth century has remained largely inexplicable spurred me to undertake an in-depth investigation to explain this phenomenon.

Women sovereigns ruling Muslim kingdoms are few and far between, and usually unknown. Fatima Mernissi’s book, The Forgotten Queens of Islam, attempted to rescue and to recognise them in history. However, even Mernissi had forgotten the numerous Muslim queens in Southeast Asia, despite the fact that, besides the sultanahs of Aceh, there were indeed many other Muslim queens in Patani, Sukadana, Bone, Jambi, among others. One possible reason for this neglect is the lack of records these women left, compared to the letters and diaries of European queens, and the lack of indigenous records about these Muslim queens in Southeast Asia.

To undertake such a study, I relied on European records to supplement indigenous ones. In the course of the seventeenth century, the Dutch and English East Indies Companies recorded the histories of the individual Malay polities they encountered. These are the most voluminous and invaluable records; the Dutch in particular were dedicated recorders, and their records are largely intact in the Nationaal Archief in The Hague. Although these sources are available, they are not accessible to those who do not know Dutch, especially classic Dutch, and who are unable to read the beautifully written manuscripts by official scribes, illegible to the untrained eye. It took me about a year of intensive training in Old Dutch and palaeography at Leiden University before I could transliterate, translate and glean information from these records.

In the course of mining the Dutch and English company records, I was struck by the detailed reports of officials relating the vivid happenings at the Aceh court and was intrigued by the role the queens played, especially Sultanah Safiatuddin. The narratives gleaned from these sources not only enabled me to reconstruct a more detailed picture of the reigns of these queens but to continue and deepen the conversation begun by earlier scholars. New evidence has allowed me to demonstrate that these women rulers were not mere puppets but ruled in their own right, albeit with serious challenges. Sultanah Safiatuddin nearly lost her life defending her honour when she was accused of committing adultery with an ulama (a religious scholar). The detailed narratives reveal interesting aspects of the queen’s relations with her male elite (orang kaya) and the foreign envoys, and provide a more nuanced picture of royal-elite relations under female rule, where power was more fluid and contested rather than reflecting the view that power mainly tilted towards the male elite. I gained considerable insight into the male elite and demonstrate that there were many factions among them and much intrigue as they vied for power. The detailed information even described the personal relations between the Dutch, the English and the Acehnese male elite, considerably enriching the narratives, and showed that these personal relations mattered in the bigger scheme of politics and diplomacy, and the contestations for power.

My book illuminates the intimate, at times, emotional relations between the Acehnese elite and officials of the Dutch East India Company, and the rich discussions - even the dance Commissar Vlamingh had to perform for Sultanah Safiatuddin - reported from audience days that determined how events unfolded and the actions both powers took. My book also provides the analytical perspective, explaining why a woman ruler was crowned for the first time in Aceh in 1641 when Southeast Asia was experiencing what Anthony Reid termed the “age of commerce”, and why female rule was accepted for 59 years in a Muslim kingdom when it seemed an anathema to Islam. The analysis revisits the notion of the kerajaan (kingdom, state of having a raja), which characterised contemporary Malay polities, centering on male rulers despite the preponderance of female rulers in the Malay world. As the “verandah of Mecca”, Aceh was plugged into the global Muslim networks and adopted many features from the Ottoman and Mughal Empires. And yet the rule of women in Aceh illustrates a significant difference from mainstream global Islamic thought, when these ideas were localised by ulama (a group of religious scholars) in this region, and Malay political-religious treatises reflect local understandings of statecraft, gender and Islamic authority.

This investigation allows me to compare critically the leadership styles between the queens and their male predecessors, and I illustrate that, to a large extent, these women rulers emphasised different bases of legitimacy and had differing ideas on the conceptions and practice of power and authority. However, I do not wish to suggest that political leadership style is necessarily gendered, and a more benevolent, consensual and protective rule is the prerogative of women sovereigns. Nevertheless, these Acehnese women rulers did have a unique relationship with their male elites, which set them apart from their male contemporaries.

From this investigation, I conclude that there is no universally acceptable theory and practice of women in leadership and authorial roles in Islam, but they are constructed by the power holders, depending on their own contemporary cultural and political contexts. This Acehnese case can serve as a basis of comparison to investigate other possible diversities or commonalities of women rulers and leaders in Southeast Asia, and in the wider Muslim world in general. In this regard, I hope to facilitate research by illuminating and informing more general studies on why there was a preponderance of women rulers in the Malay Muslim region and to further studies on Islamic female leadership in general.

The current intense, often regressive, debates on the role of women in Islam, the increased policing of women’s actions, and the expansion of the spheres forbidden to women in the name of Islam by some groups must not be the dominant narratives among Muslims and the pervasive perception of non-Muslims. This book shows that about 500 years ago women were accepted as sovereign rulers. Lineage and the personal and political acumen of these women to maintain themselves at the helm of power and authority were important, so were other factors, such as male attitudes, historical-cultural traditions, and gender norms.

The diversity and richness of Muslim women’s experiences in history allow for a more balanced and comprehensive picture of women’s roles in Islam, and can perhaps serve as a heartening example, even an inspiration, for women today.

Details: Sovereign Women in a Muslim Kingdom: The Sultanahs of Aceh, 1641−1699 is published in paperback by NUS Press, priced in local currencies.