In Praise of the International Dublin Literary Award

I was honoured this year to be invited to be a judge for the International Dublin Literary Award (IDLA, formerly known as the IMPAC Prize), one of the most prestigious awards for fiction. As a translator, I was hugely excited to have the opportunity to expand my reading horizons and read some of the best contemporary fiction, so I said yes. In short order, box after box after box of books arrived for me, trundled down the rough track that leads to my house in Dorset by a surprised delivery driver.
IDLA is special for several reasons, not least because submissions can be made by any public libraries world-wide who wish to sign up for the scheme, so the prize is a great way of flagging up the hugely important role that such libraries have always played in the lives of readers, young and old. But what does the IDLA have to do with my usual blog topic, translation? Ah, well, that’s the magic of the IDLA. It’s the only major literary prize that treats translations into English on the same basis as works written originally in English.  Although the number of translations submitted was, unsurprisingly, less than ‘originals’, six splendid translations, out of a total of ten, made it onto the official shortlist. 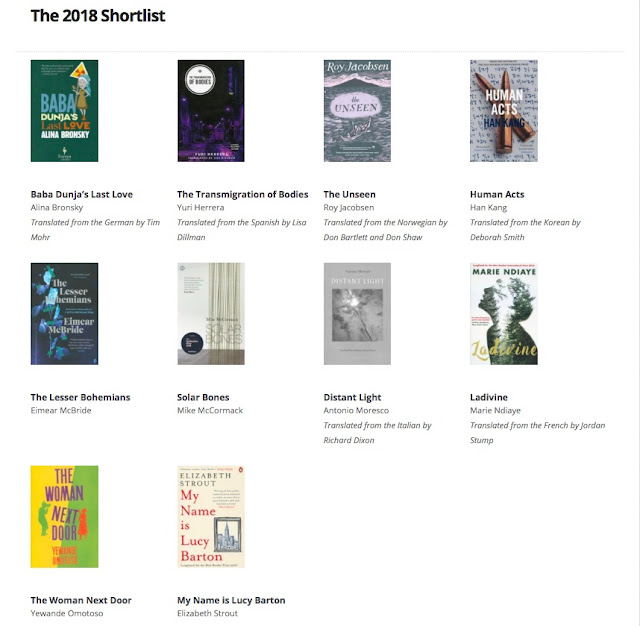 The Unseen, Roy Jacobsen, translated from the Norwegian by Don Bartlett and Don Shaw. Three generations of the Barrøy family live a subsistence life of farming, fishing and migrant labour on an island off the coast of Norway. Their number is gradually extended by pregnancy, (hoped-for and unplanned), passing strangers and happenstance. We judges called it ‘beautiful and compelling; as wry and apparently light-handed as it is intimate and fresh.’
Distant Light, Antonio Moresco, translated from the Italian by Richard Dixon. A man living completely alone in an abandoned mountain village comes across a young boy, a fey strange creature, and gradually wins his trust. This is a literally haunting story in which the past and the present merge into the surreal, yet the natural scenery and the passing of the seasons, are evoked with complete realism. A gorgeously lush translation that does justice to the lyricism of the original.
Ladivine by Marie Ndiaye, translated from the French by Jordan Stump. Clarisse Rivière refuses to admit to her husband Richard and to her daughter Ladivine that her mother is a poor black housekeeper. Instead, weighed down by guilt, she pretends to be an orphan, visiting her mother in secret and telling no one of her real identity as Malinka, daughter of Ladivine Sylla. A beautiful but disturbing story of three generations of women whose lives are irrevocably damaged by lies and violence.
Baba Dunja’s Last Love by Alina Bronsky, translated from the German by Tim Mohr. Baba Dunja is a Chernobyl returnee, one of a motley bunch of former neighbours, determined to recreate their old lives in the radioactive no-man’s land. Only the elderly dare return to this blighted, toxic place, but return they do, and live out their days with gusto. Wryly humorous, touching and sharply perceptive about the humanity of old age.
The Transmigration of Bodies by Yuri Herrera, translated from the Spanish by Lisa Dillman. In a city blighted by crime and death, feuding criminals negotiate over the bodies of murder victims.  Herrera, the master of noir stories, builds an entire world in a concise hundred pages. The translator does a splendid job of recreating in English his vivid mixture of slang and lyricism.
Human Acts by Han Kang, translated from the Korean by Deborah Smith. Interconnected stories of lives changed forever by the 1980 Gwangju Uprising in South Korea. If you have ever read anything about the 1973 coup d’etat that put Pinochet into power in Chile, you will recognise the awful transition from political protest led by idealist youth to oppression, torture, violence and death. Beautifully told, smoothly translated.
These six are a tribute both to the inclusiveness of this prize, and the quality and range of contemporary translated fiction available to us in English generally. Interestingly, as we judges argued back and forth over our favourite books, we never once talked about the translated ones as being in any way different because they had originated in another language. To us, they were excellent works of literature and were to be judged as such. And that, I believe, is just how it should be.
With the IDLA, there are five judges drawn from different countries, (though this year we were all UK-based) and usually including one translator. We spent a weekend together in November to consider the entirety of the submissions, and over the months, and through various conference calls, we whittled that down to a shortlist and then to one winner. The process of that debate was certainly challenging: I found it surprisingly difficult to articulate why a certain book engaged me, impressed and delighted me, stayed with me…or, conversely, irritated or bored me. Our egos definitely had to be left outside the door.
In the end, there were several gorgeous novels that I’ll treasure and re-read. However, there can only be one winner. And on June 13th 2018, we met again in Dublin to celebrate the presentation of the award to a Galway-based writer Mike McCormack, for his beautiful novel Solar Bones. This is the story of the dead Marcus in his own words. To quote our citation: ‘In this probing of what it means to play out the various roles of husband, father, son, brother, colleague and neighbour, Solar Bones offers a sharp, acerbic and often very funny response to contemporary Irish masculinity. Its account of the relationship between Marcus and Mairead is a particularly piercing and affecting portrayal of contemporary marriage, with its necessary inter-webbings and defended privacies; its desires, losses and rewards.’ According to Mike in his acceptance speech, Solar Bones did not have an easy ride to publication; his previous publishers turned down this book on the grounds that there was ‘too much domesticity’ and ‘no one will read it’, (I bet they’re gnashing their teeth now) and for years no one else wanted it either, until Tramp Press, a new small Irish publisher, took it up. ‘Too much domesticity’? Now that’s a fascinating thought, with quite a long literary history.
After the event, I presented (offloaded?) all 150-odd novels, with the exception of a particular favourite, Madeleine Thien’s Do Not Say We Have Nothing, to the Weldmar Hospice Book Shop in Dorchester where I live. They then asked me to talk about the Dublin Literary Award to a group of local readers who, fired up my enthusiasm and by-now-intimate knowledge of a good number of the novels, swooped on them and bought all the best ones up. So we were able to continue the literary celebrations. And, yes, in spite of (or rather, because of) all that intensive reading, I’d do it again any day; I feel as privileged to have been part of the IDLA now as I did when I was first asked.
Posted by Nicky Harman at 01:00