All She Was Worth is a 1992 noir mystery written by Miyuki Miyabe, one of Japan's most famous genre writers, including crime fiction. Taking place in the early 1990s, the novel captures the zeitgeist of the Bubble Economy of the 80s/early 90s, which would soon pop and led to the infamous "Lost Decade." 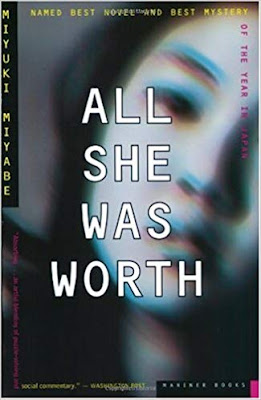 Shunuske Honma, a detective in the Tokyo Metropolitan Police Department, is on leave due to a past incident on the job that injured his leg. While recuperating, a distant relative of his late wife contacts him with a request - find his missing fiancée, Shoko Sekine. Apparently, she disappeared after a bank rejected her application for a credit card, which revealed her past money problems.

Apparently, Shoko has always paid for everything in cash and her fiancée pressured her into applying for a credit card. When it is revealed that she declared bankruptcy after years of living an extravagant lifestyle, Shoko vanishes into the night.

As Honma investigates further, troubling developments complicate this simple missing persons case. It becomes apparent that the woman known as “Shoko Sekine” isn’t actually her. This imposter might have killed the real Shoko Sekine, but Honma isn’t sure what to believe, since the real Shoko Sekine has also vanished without a trace. Also eerie is the thought that Detective Honma’s relative might not be who he says he is, and might have helped this mystery woman dispose of the real Shoko Sekine.

Debt is a common theme of All She Was Worth, as it has swallowed all of Japan and its inhabitants during the late Showa/early Heisei Era. Much of the economy was built with credit, and it fueled consumerism to ridiculous heights as every middle-class Japanese was in a perpetual "keeping up with the Joneses" mentality. The cracks in the economy are beginning to show throughout the novel, and the harassment debtors face from credit card companies is harrowing. Even worse for them, the Police are rendered impotent due to laws that heavily favor debt collectors.

Another big theme of All She Was Worth, is the family registry, which is tightly controlled and regulated in Japan. Identity theft isn’t common there, especially not in the early 1990s, which means Detective Honma has his work cut out for him in determining how and why the real Shoko Sekine’s identity was stolen.

The novel isn’t without its flaws though. A page turner it is not, with the mystery being somewhat plodding. A common trope in Japanese mystery fiction (推理小説 suiri shōsetsu – literally ‘deductive reasoning fiction’) are the huge chunks of expository dialogue. This is common in Edogawa Ranpo’s Detective Akechi stories as well as books like The Tattoo Murder Case. There is even a rather large section dedicated to the specifics of how credit cards work. This is all well and good since it ties into the overall mystery, but its minute detail can take the reader out of the story.

Still, All She Was Worth is a good noir mystery, and an even better time capsule of Japan’s hedonistic, consumer-crazy culture during the Bubble Years.