Melissa De Silva talks to Elaine Chiew about 'others', discovering her ancestry in Malacca, and making pineapple tarts.

Melissa De Silva grew up in her grandmother's flat in Toa Payoh, which is why she thought the dragon playground in front of her grandmother's block was her exclusive playground. Besides her award-winning debut book, 'Others' is Not a Race, Melissa's fiction has been published in Best New Singaporean Short Stories Vol. 3, Wilderness Literary Review, Singapore Quarterly Literary Review and LONTAR: The Journal of Southeast Asian Speculative Fiction. She has worked as a magazine journalist and a book editor. She is currently Singapore’s Education Ambassador for American nonprofit Write the World (writetheworld.com). Melissa leads a wide variety of workshops on writing memoirs, writing for healing and catharsis, childhood and family memories, food and travel writing, cultural identity and women's identity and empowerment.

EC: Welcome to AsianBooksBlog, Melissa. Fantastic to have you with us to discuss your trenchant book which won the Singapore Literature Prize 2018, ‘Others’ Is Not A Race (Math Paper Press, 2017).

First, let’s start with your background. What led you to writing, and specifically, to the writing of this book?

MDS:  I started writing for practical reasons, for work, and had a career as a magazine journalist for a good number of years. Nothing prompted me to write ‘creatively’ until my grandmother, Patsy Pinto (who is depicted in the first story of the collection, ‘The Gift’), passed away. It was only with her passing that I realized, much too late, that so much of the Eurasian culture and language I’d never bothered to learn about had gone with her. And so began my personal journey of trying to reclaim some of my own culture, and understand more about my community’s food, livelihood and linguistic traditions and also the places and spaces of my family’s past in Singapore. I travelled to Malacca to document my father’s cousin engaging in the traditional work of the Portuguese-Eurasians there, fishing. I tried cooking some popular Eurasian dishes which I hadn’t eaten in many years. I began learning my mother tongue, the 500-year-old creole language of Portuguese and Malay, which originated in Malacca. Having done those things (and I am still on this cultural reclamation journey), I feel much more of a sense of my own Eurasianness. One of the marvellous unexpected effects of the book is that a number of readers have told me it has inspired them to learn more about their own cultures and to revive their own traditions and languages. 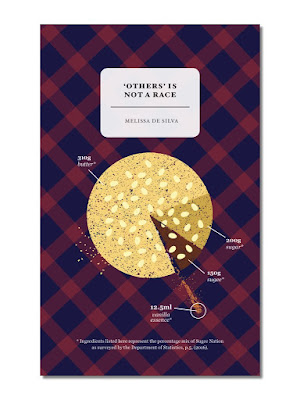 EC: For our non-Singaporean readers, perhaps you could provide a sense of what the categories ‘others’ or ‘CMIO’ encompass for government purposes. What was the process that led to your decision to make it (a) the title of your book and (b) the focus of one of your essays in the collection, “Letter to Anonymous Policy Maker (‘Others’ Is Not A Race)”, which confronts this issue directly?

MDS: ‘CMIO’ is an acronym for Chinese, Malay, Indian and Others. This is the official racial categorisation in Singapore. ‘Letter to Anonymous Policy Maker (RE: ‘Others’ is Not a Race) articulates my feelings about Eurasians, who are equally citizens of Singapore, being classified under the ‘Others’ category. I find this demeaning. It also curtails our visibility to the rest of Singapore’s population and contributes to a lack of awareness of what Eurasians are and the fact that we are Singaporean.

I felt it was natural that the title of the book derived from this, because the collection is about Eurasian culture and history as a community in Singapore and I hope illustrates to any reader that we are a distinct people with our own heritage, cuisine, language and traditions. It’s a simple fact, that ‘Others’ is not a race, and we Eurasian Singaporeans deserve more than being put in a box with that label.

EC: One of the most poignant threads in the book for me was your ‘lament’ (is that too strong?) for Kristang, the mother tongue for Eurasians in this part of Southeast Asia, as well as your efforts to recuperate the language for yourself. How much did Kristang shape your childhood and adolescent years?

MDS: I heard my grandmother, Patsy Pinto, speak Kristang to her sisters when I was growing up. I lived with my grandmother until I was about five years old, when my parents went to work. So I was imbued with the music and the beauty of the language from quite early on. While I didn’t speak it, I realized later that my brain absorbed certain phrases and words so that there is some familiarity now as I study it years later. I am grateful for that!

EC: Let’s talk food. Food within Eurasian culture forms another potent thematic within the collection, which brims with references to sugee cake, chinchalok, belachan, pineapple tarts, debal, just to name a few of the mouth-watering foods described (with recipes included!).

How much recipe testing or cooking was involved in the writing of this book, or perhaps I should ask how much eating was involved (were other foods considered but not included?)

MDS: The cooking and recipe testing were exactly as what were depicted in the book. Making sugee cake and debal curry. I have been part of the pineapple tart-making production line at Christmas since I was a child when my maternal grandmother, Patsy Pinto, was alive, so there was no need to reclaim or rediscover that. About two weeks before Christmas, when I was in primary school, my mum, my aunt who is my mum’s younger sister, my grandmother and myself would be at the kitchen table at my grandmother’s house in Toa Payoh. My grandmother and mother would be the ones rolling out the dough and cutting out the tarts from the pastry. My aunt usually had the job of filling in the tart cases with pineapple jam and I, since I was so little, would have the relatively simple task of cutting bits of pastry into strips to make tiny ‘S’ or ‘A’ or other alphabet shapes to put on top of the jam on each tart.

EC: In your essay ‘Meeting with the Sea’ in the collection, you mention a real sense of homecoming when visiting relatives in Malacca. Tell us more.

MDS: Well, going to Malacca for that visit to the Portuguese Settlement was an experience of going, finally, to a place where the people looked like me. That is never an experience I have in Singapore, of course, where most Singaporeans can’t place where I am from and look very different from me. I think those who have always been among others from their own community might not realise how lonely it can feel sometimes, to be surrounded by cultures and peoples different to yourself, even if we are all Singaporean. Another thing I have had to deal with my whole life living in Singapore is the constant question by people about my surname or where I am from, or other variations of questions which are clearly based on the assumption that because I am not Malay, Chinese or Indian, I cannot therefore be Singaporean. In the Portuguese Settlement in Malacca, I had the bliss of not being questioned about who I was (or ‘what’ I was) as the people there recognized me immediately as a fellow Eurasian of Portuguese descent. It was a powerful feeling of homecoming, of return, of acceptance and relief.

EC:  In 2018, ‘Others’ Is Not A Race won the prestigious Singapore Literature Prize. How has life changed for you since winning the prize?

MDS: I’m grateful for the opportunities that have come my way, invitations to conduct writing workshops or give author talks, for instance, because of the reputation of the prize. I never expected my book to win, and it has been a very humbling experience.

EC: Thank you for joining us Melissa. We look forward to hearing about your further writing ventures.
Posted by E.P. Chiew at 10:33