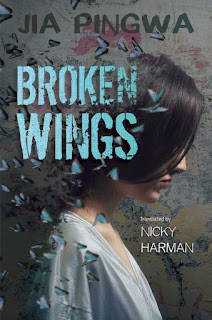 Nicky Harman writes: I have just finished translating Broken Wings, a novel by Jia Pingwa about human trafficking. Kidnapping is not a popular theme in literary fiction; a Goodreads list consists exclusively of man-rescues-beautiful-girl, “romantic suspense” genre novels. (Though of course, there is also a lot of quality non-fiction, in the form of memoirs by trafficked women.) So some of Jia Pingwa’s biggest fans in China were surprised when this work (called in the original Chinese, 《极花》, literally, extreme- or pole-flower) came out in 2016. Butterfly is a young woman who is kidnapped and taken to a remote country village where Bright Black, the wifeless farmer who has bought her, imprisons her in his cave home. He rapes her and she gives birth to a baby son. The rape, the birth and Butterfly’s fading hopes are described in her own voice, and the effect is bleak. Jia writes in his Afterword that he was inspired to write this story by the experience of a friend whose daughter suffered a similar fate. The real-life young woman was eventually rescued but could not cope either with her sudden notoriety or the loss of her baby, whom she had had to leave behind, and actually returned to the village.

Broken Wings is a disturbing read for other reasons too: Jia Pingwa hints at Butterfly's impending mental breakdown, and presents us with an eventual rescue which may, or may not, be a dream sequence. Will Broken Wings appeal to English-language readers and if so, why? Having been alone with my translation for many months, I was keen to ask my editor, David Lammie, for his views on the book.

NH: what struck you when you were editing it?
DL: Two things struck me in particular. First, the resilience and tenacity of the central character, Butterfly, and the desperate predicament in which she finds herself. Abducted, imprisoned and alone, she’s struggling to make sense of what has happened to her while adjusting to the reality of her new circumstances. The second is this very specific setting of a remote, barren village in Shaanxi, north-west China. It’s such an insular place, cut off from everywhere else, with no mobile phones, no cars. You really get a feel for a way of life that has probably changed little over the years and is far removed from the urban one experienced by most Westerners travellers to China. The most shocking thing to me is that “bride-buying” here is an accepted practice. This is a remote village where all the young women have been lost to the cities, and all the male characters, including the local police chief and Party Secretary, seem to have bought into the need to kidnap women in order to find wives and continue the family line. They think there’s nothing wrong in this, which is one of the saddest aspects of the story. Of course, they are breaking the law – and yet the practice still goes on.

NH: Jia took a lot of flak in China, even though he condemns kidnapping unequivocally, from women readers who accused him of being too sympathetic to the kidnappers.
DL: Jia shows how these men are shaped by the bleak environment in which they find themselves. “Your birthplace determines what you are,” he writes in his Afterword. Bright Black behaves in an appalling way, but you also see occasional flashes of compassion and warmth within him. He’s not a complete monster. In a different environment, and with the benefit of an education, you feel this would be a different person. Butterfly wrestles with the question of whether Black is a good or bad person, and, at a significant point in the story, she reproaches herself for wishing him dead. Some readers may be similarly conflicted.

NH: Are there any features of village life that particularly impressed themselves on you?
DL: In addition to the casual brutality and violence, I found the squabbling and simmering tensions in this village particularly oppressive. There are no secrets and no sense of individual privacy. The place is awash with rumours and gossip. Even Butterfly, trapped in her cave, is able to learn much of what’s going on by overhearing the discussions and arguments on the strip outside. And when she does finally venture out and enter the village, she’s followed every step of the way by the family dog, who has been trained to follow her.

NH: How do you think western readers will react, given the strangeness both of the background and of the storyline?
DL: Few Western readers will have been exposed to either the storyline or setting of this novel, but that’s one reason why it’s such a vital book. This is a completely different world, a rural China that in one sense has been little touched by the reform and opening-up process, but which has also been devasted by it, in that the youngest and most able villagers have been lured away, leaving the old, the uneducated, the disabled and sick to fend for themselves. As Jia says: “The cities have plundered wealth, labour power and women from the villages… What I wanted to explore was how the cities grew fat while the villages fell into destitution.”

NH: Trafficking is rife globally, of course. So I was very interested in how reviewers would react in Mexico, where the Spanish-language translation (by Liljana Arsovska) came out as La Flor Suprema in 2018. Let me quote from La Jornada Semanal: “This novel is notable for the subtle emotions it evokes and the skill with which [the author] unravels the threads of customs that cause the archaic and the modern to clash. La Flor Suprema makes us question a human condition which imprisons us in ideological ‘caves’, or in real caves, basements or crypts. We would do well, when reading this book, to remember that there are many similarities between our lives and that of a young girl, shut away in the Far East, and not to forget, also, that in our country there are many women who have been kidnapped or ‘disappeared’.” [my translation]

Broken Wings is out this spring, published by ACA Publishing.
Posted by Nicky Harman at 06:00