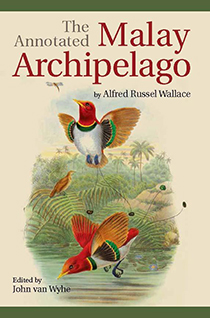 This post is about The Annotated Malay Archipelago, a version of the book that 19th-century naturalist Alfred Russel Wallace wrote based on journals from his eight-year journey among the islands of Southeast Asia several years after his return to England. It was originally published in two volumes in 1869, and has never been out of print.

Wallace, a contemporary and correspondent of Charles Darwin, helped develop, or at least accepted early on, Darwin’s theory of natural selection and plotted what is now known as the Wallace Line, which separates the two ecologically distinct zones of Asia and Australia.

Contemporary readers will probably wince at Wallace’s “kill and collect” approach to studying exotic birds and mammals and abhor his characteristically Victorian racist generalisations about the physical and moral characteristics of the Asian people he encountered. Nevertheless, his work is worth reading. Wallace was an intrepid adventurer intent on studying creatures in far-flung lands, and his fascination with the wonders of the natural world continues to inspire joy.

See below to find out what you need to know to decide whether you should read The Annotated Malay Archipelago, or what you should know about it even if you never do!

The purpose of Wallace’s trip was to collect beetles, butterflies, birds, shells of land snails, and possibly some mammals for his own and others’ collections and ship them back to Europe to be sold. Wallace relied on income from these sales to fund his travels because he had no family fortune, as other prominent naturalists of the day did. Wallace was particularly interested in collecting and discovering beautiful new types of bird of paradise, but also collected hundreds of samples of insects which had no obvious aesthetic appeal.

Wallace was the first European to describe or collect a number of animals in the Southeast Asian region. He was the first European to even attempt to observe some of the animals in their natural environment. His discoveries were not limited to biology, however: he used observations about animals to draw conclusions about geology. By making comparisons between the related animals of different islands, he made inferences about the epoch in which the islands of the archipelago were formed from volcanic action or separated from adjoining land masses based on when their animals must have begun to diverge in form and appearance. He concluded that the islands, though seeming to be of one group, were of two groups with a third group straddling their middle and acting as a transitional zone in terms of what he called the islands’ “natural productions”. He reflected long and deeply about how the earth is not as reliable and unchanging as we are generally tempted to believe.

Some of the  most interesting stories were about the hardships Wallace faced or the risks he ran that almost killed him. Although he was welcomed and quickly given lodgings almost everywhere he went, and had a crew of local people to help him with the logistics of travel and with his collecting work, life was by no means easy for him. His work required him to plunge into the wild, where he had to ford rivers, wade through mud and walk over sharp rocks that destroyed shoes he could not easily replace.

Wallace had to take good care of his feet because if he could not walk, he could not work. Nor could he work during occasional bouts of malaria and dysentery. Working or not, he was constantly beset by sand flies, mosquitoes, ants and ticks. Larger animals occasionally posed a threat: he witnessed the killing of a twelve-foot python after he noticed it curled around a ceiling beam in his hut in Amboyna, and he helped kill a venomous snake that crept into the luggage on one of his boat trips.

Travel by sea was chancy. After Wallace bought a boat for one of his inter-island journeys, on and off for a period of almost three months, he was unlucky with the wind. He and his crew were repeatedly swept out to sea, unable to control the direction of the boat or even anchor it properly. In an attempt to collect materials to improve the anchor, two of the rowers were marooned for several weeks.

Despite Wallace’s strenuous efforts to procure and preserve a variety of rare specimens, rain, ants, rats and dogs destroyed a not-insignificant portion of what he collected before he could load it safely for shipment back to England. Though surely he must have felt discouraged from time to time, he apparently retained a marvellous sense of wonder—and a sense of humour.


Editions of The Malay Archipelago

This important work in the history of science is available in multiple editions, including free digital versions of the two volumes of the original work, available at Project Gutenberg.
http://www.gutenberg.org/ebooks/author/955

The attractive annotated edition pictured above was edited by John van Wyhe and published in 2014 by NUS Press. It contains an introduction, 16 coloured pages containing 51 different illustrations, and a further 67 black-and-white illustrations scattered throughout the text, including one fold-out map. The text has been not only proofread but carefully fact-checked against other historical records. Most of the notes provide corrected or additional details about people, places, dates, or species referred to ambiguously or inaccurately in the text. These corrections and additions seem likely to be of value to researchers using the text as primary source material, but they are unlikely to aid a non-academic reader in appreciating Wallace’s adventures. In other words, the notes, though informative in a strict sense, make the work more scholarly, but not more accessible.
https://nuspress.nus.edu.sg/products/the-annotated-malay-archipelago-by-alfred-russel-wallace