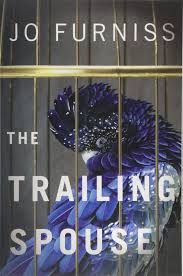 500 words from is an occasional series in which novelists talk about their new novels. Jo Furniss has recently brought out The Trailing Spouse.

After spending a decade as a broadcast journalist for the BBC, Jo became a freelance writer and serial expatriate. Originally from the United Kingdom, she spent seven years in Singapore and also lived in Switzerland and Cameroon. Jo’s debut novel, All the Little Children, was an Amazon Charts bestseller.

The Trailing Spouse is a novel of marriage, betrayal, and murder set in Singapore. Amanda Bonham moved halfway around the world to be with the man she loves. Although expat life in Singapore can be difficult, Edward Bonham is a dream husband and a doting father to his teenage daughter, Josie. But when their maid dies in an apparent suicide, Amanda can’t help but wonder if her perfect husband has a fatal flaw. And if he can’t resist temptation under their own roof, what does he get up to when he travels? Camille Kemble also has questions for Edward. Recently returned to Singapore, Camille is determined to resolve a family mystery. Amid a jumble of faded childhood memories, she keeps seeing Edward’s handsome face. And she wants to know why. For one woman, the search for answers threatens everything she has. For another, it’s the key to all she lost. Both are determined to find the truth.

My second novel, The Trailing Spouse, will always be known (in my head) as "the one that started coming true". For a writer of domestic thrillers, that’s quite a scary proposition!

You could argue that the premise of the novel was already uncomfortably close to real life. The Trailing Spouse tells the story of Amanda Bonham, a British expat who lives in Singapore with her business traveller husband, Edward. People often ask authors where they get their ideas; for me, I like to take a familiar situation and twist it by asking: what if?

What if an expat wife gave up everything to follow her man and then found a fatal flaw? What if her "perfect" new life spiralled out of control? What if she found herself thousands of miles from home, isolated and powerless and in danger?

While the story is grounded in reality (i.e. a community I’ve lived in for 16 years), I wanted to give the novel a tinge of gothic. That demands a slide away from reality into another realm - parable or something like a waking nightmare.

I’m a big fan of suburban gothic novels like May We Be Forgiven (A. M Holmes), movies such as American Beauty, and shows like Desperate Housewives. These stories take us behind-the-scenes of the lives of people who present to the outside world an image of effortless privilege and perfection. We get to peer through the cracks in their facade, to see the true cost of keeping up appearances.

A perfect example is the movie Blue Velvet, which David Lynch opens with a shot of an archetypal American suburban family — picket fence, children playing in the yard, adults chatting round the grill — but the camera pans down into grass that is writhing with thousands of bugs. We know he is going to take us into the dark underbelly of this world.

Suburban gothic stories are often set in American cities, like Los Angeles  or New York, places where people lead a lifestyle worth aspiring to. Glamorous. Sunny. Superior. It struck me that Singapore (especially its expat community) is also a place that presents the best side of its profile to the world. So I decided to drop my domestic thriller into this hothouse of competitive perfection.

So how did the novel come true?

The first draft focused on Amanda and Ed as their marriage cracks and shatters. While I was writing this draft, the marriages of two dear friends ran into trouble and I witnessed at close quarters their grief and pain.

The second draft brought in a storyline about foreign domestic workers; maids or "helpers". Again, while writing, a film of a young woman who jumped to her death from a condo balcony in Singapore went viral and brought a distressing issue to the fore. It made me dig deeper into the storyline focusing on the vulnerability of migrant women.

Finally, Amanda’s story turns on her precarious status as a "trailing spouse". She treads on eggshells (she feels) because her husband has the power to revoke her right to live in Singapore. Weirdly, as I was working on final edits to the novel, a change to my husband’s job meant that we had to leave Singapore suddenly, albeit for less dramatic and macabre reasons than my fictional creation, Amanda Bonham!

Perhaps the sense of a story "coming true" is a necessary part of the alchemy of writing, a side-effect of the process of inhabiting characters’ lives. Or maybe the moral of the story is this: authors who ground their novels in real life and discuss real issues shouldn’t be surprised when the facts take over the fiction.

Details: The Trailing Spouse is published by Lake Union Publishing in paperback and eBook, priced in local currencies.