Student bookshelf: Review and analysis of A Pearl in the Forest 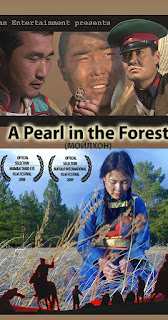 Aurelia Paul recently graduated from Boston University, where she was studying comparative literature and Chinese. In her column Student bookshelf, she shares responses to materials she has explored in her classes.

Today, Aurelia will be discussing a Mongolian film that came out in 2008, Enkhtaivan Agvaantseren’s A Pearl in the Forest.

The Buryat People and Historical Background

This work comments on the persecution of Buryat refugees in Mongolia in the 1930s. The Buryats are the dominant ethnic minority group that lives in Siberia. They speak their own language, also called Buryat. This language is similar to Mongolian and uses the Cyrillic script. Buryats, like Mongols, traditionally live nomadically in gers. However, because of close contact with Russia, some Buryat settlements have become agricultural. People living in these settlements often reside in Russian-style wooden houses, which can be seen in the film.

In 1923 the Soviet administration created the Buryat-Mongol Autonomous Soviet Socialist Republic within the Union. However, Stalin was alarmed by the possibility of Soviet resistance from the Buryat community, and so ordered a campaign against them. Thousands of people died as a result of this ethnic violence, and numerous Buddhist sites of worship were destroyed.

Characters in A Pearl in the Forest

The film focuses on characters that live in a remote Mongolian village close to the Russian border. The positive heroes of the film are Sengem and Dugar, who are engaged. The negative hero of the film is Markhaa, a Mongolian soldier who is loyal to officers of the Soviet army. Markhaa and the Soviet soldiers are portrayed as wantonly cruel and bloodthirsty.

Although Sengem is engaged, Markhaa makes numerous advances towards her. One day he visits her hut “for tea” and brutally rapes her. After this, Sengem feels that she has no choice but to be with him because she has lost her virginity to him. This reflects traditional ideas about the need for women to be pure and only have one sexual partner. However, later in the film things change. Dugar comes back from his travels, and upon finding Sengem and Markhaa together he angrily attacks Markhaa and leaves. Sengem becomes extremely sad after seeing her beloved and so runs away to a wooded area. She walks up to a cliff, and is about to throw herself off it. Suddenly, Dugar appears and saves her.

In addition to being very heartwarming, this scene makes some important ideological points. Firstly, it shows the devastating psychological consequences of sexual assault. Sengem is so distraught over both the assault itself and the ramifications of the assault (she feels that she cannot be with the man she truly loves) that she is driven to attempt suicide. This draws attention to the extreme shame and sorrow that victims experience. Secondly, Dugar’s appearance at the cliff opposes traditional ideas about the worth of women who have been raped. Although at first, Dugar leaves and seems to believe that Sengem can no longer be his wife, he changes his mind and goes back for her. Afterwards they live together happily and even have a child. The importance of this cannot be overemphasized as it provides a strong argument against rejection of sexually assaulted women, both by their lovers and by society as a whole. Furthermore, Sengem’s eventual happiness with Dugar provides a hopeful image for victims.

Examination of Evil and Betrayal

A Pearl in the Forest depicts many inhumane acts that are inflicted on Buryat refugees. These people have left the collectivist villages of the Soviet Union, and so are viewed as traitors by Soviet soldiers. At the beginning of the film, we watch soldiers arrest a family of refugees and those who were hosting or helping them. After their arrests, these political prisoners are put to death. This scene shows the absolute intolerance that the Soviet regime had for any citizens that showed disobedience. Everyone is given the same punishment, and this demonstrates the fact that there was no retributive justice. There are no official records made of the arrests or killings, and thus we are informed of the legally invisible nature of the soldier’s actions. The violence of the film increases as it progresses. Eventually, all but two of the men from the village get shot. This points to the absurdity and unbelievable scale of the violence committed against normal people during the 1930s.

There are four soldiers who commit these crimes, but the film focuses on Markhaa, the only Mongolian in the group. In many ways, Markhaa is the embodiment of betrayal. He murders people that he grew up with, including his own family members. It is through Markhaa that Agvaantseren address questions of national betrayal: How could thousands of young men justify killing fellow Mongolians?

There is one scene in which an answer is suggested. Markhaa has a moment of reflection under a tree, and begins questioning what he has done. He ultimately decides that his actions were right because, as he tells us, “I was doing what I was told”. Markhaa has a portrait of Stalin hung up in his office, and throughout the film he is shown to be following orders of the Soviet soldiers. The depiction of Markhaa can be read as an implicit critique of Marshal Choibalsan, a Mongolian leader who rose to power in 1936 and conducted purges of lamas, monks, politicians, intellectuals, and ethnic minority groups. Choibalsan was also acting under Stalin’s orders and was put in power by the Soviet regime for his loyalty to the Soviet cause. Both Markaa and Choibalsan remind us of the terror of obedient evil.

A Pearl in the Forest explores the traumatic history of the 1930s in northwestern Mongolia. At the same time, it provides a captivating love story. This combination of themes creates an emotional piece of Mongolian cinema that carries an important message of remembrance for purge victims. In my personal academic experience, I have found that Stalin’s purges in the Soviet Union are frequently discussed and studied, whereas similar purges in Mongolia are hardly ever acknowledged. This film encourages greater historical and political awareness about an Asian region that is often overlooked, yet is culturally rich and socially complex.

Details: A Pearl in the Forest, directed by Agvaantseren, Enkhtaivan. Produced by Idugan Media, 2008. Available here