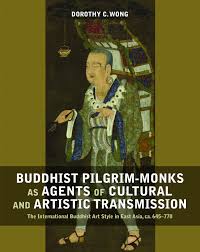 Dorothy C. Wong is Professor of Art and Director of the East Asian Center at the University of Virginia. She has published Chinese Steles: Pre-Buddhist and Buddhist Use of a Symbolic Form (2004; Chinese edition 2011), Hōryūji Reconsidered (editor and contributing author, 2008), and China and Beyond in the Mediaeval Period: Cultural Crossings and Inter-regional Connections (co-editor with Gustav Heldt, and contributing author, 2014). Her most recent book is Buddhist Pilgrim-Monks as Agents of Cultural and Artistic Transmission: The International Buddhist Art Style in East Asia, ca. 645-770.

In the mid-seventh century, a class of Buddhist pilgrim-monks disseminated an art style in China, Japan, and Korea that was uniform in both iconography and formal properties. Traveling between the courts and religious centers of the region, these pilgrim-monks played a powerful role in this proto-cosmopolitanism, promulgating what came to be known as the International Buddhist Art Style.

The seeds for my writing a book on exchanges between China and Japan were sown when I left Hong Kong to attend International Christian University (ICU) in Tokyo as an undergraduate. My travels and study experiences in Japan became a rich wellspring of memory that I have drawn on again and again over the years. Unlike my own travels, the Buddhist monks, scholars, ambassadors, craftsmen, and others examined in this volume undertook arduous journeys, often at the risk of their lives, to reach distant lands and cultures. Yet in studying these historical figures, both known and unknown, it is their resolve and unremitting efforts to acquire knowledge that I have found most inspiring—whether it be knowledge of religious doctrine, higher forms of government, culture, aesthetics, science and technology, or material goods. To me this epitomizes the human spirit that is at the heart of what we call civilization.

The period ca. 645–770 was an extraordinary one in the development of East Asian Buddhism and Buddhist art. Increased contacts between China and the regions to its west and east facilitated the circulation of ideas, practices, and art forms, giving rise to a synthetic art style that was uniform in both iconography and formal characteristics. The new Buddhist art idiom, sometimes referred to as the “Tang International Buddhist Art Style,” was a synthesis in both style and content of fresh influences from India and the existing tradition of Buddhist art in China that had developed since the fifth century. From China this new style spread to neighboring cultures and became a shared visual language across East Asia by the first half of the eighth century.

Thus far, there have not been any serious attempts to understand how this International Buddhist Art Style of East Asia came about and what constituted its “international” character. What were the conditions that allowed a particular art style to be adopted as the classic norm that transcended cultural and political boundaries? Who facilitated this phenomenon, namely, who were the purveyors of a set of ideals across geographic borders?

In this volume, I argue that this homogenous, cosmopolitan Buddhist art style that held sway in East Asia for about a century was underscored by the common ideal or utopia of a “Buddhist state” or “Buddhist empire.” The ideal of a Buddhist state developed from early discourses on Buddhist kingship that had focused on the concept of the cakravartin (universal monarch), namely, a ruler who rules with righteousness and is a devout Buddhist who supports the organized Buddhist institution. In India, the legendary King Aśoka of the Maurya dynasty (third century BCE), who converted to Buddhism after a bloody battle, became the model of a Buddhist king.  The ideology of Buddhist monarchs founding “world empires” was implemented all across Asia, from the Himalayas to Central Asia in the early centuries of the Common Era, followed by East Asia in the middle centuries of the first millennium, and then continued in Southeast Asia and Tibet after the first millennium.

In this context, the experimentation of a utopian Buddhist state in East Asia represented episodes of the long tradition of the commingling of religion and politics in the pan-Asian history of Buddhism. First, Empress Wu Zetian 武則天 (a.k.a. Wu Zhao 武曌; r. 684–705) of China founded the Zhou 周 dynasty (690–705) as a Buddhist state. Inspired by Wu, the only female ruler in Chinese history, the Japanese sovereign Shōmu 聖武 (r. 720–49) and his daughter, who ruled as Kōken-Shōtoku 孝謙–称徳 (r. 749–58, 765–70) similarly adopted Buddhism as the state religion. To a lesser extent, the notion of Buddhist kingship was also experimented in Korea.

In addition to the paradigm of the cakravartin, the state Buddhism of China and Japan was informed by the Avataṃsaka (translated as Flower Ornament; Ch. Huayan 華嚴; J. Kegon; K. Hwaŏm) doctrine. Based on the Avataṃsaka Sūtra, or Flower Ornament Sūtra, an advanced treatise in Mahāyāna Buddhism, the doctrine’s vision of an ordered universe with a supreme, omniscient Buddha—Vairocana, Buddha of Great Illumination and the transcendent form of Śākyamuni—presiding over innumerable universes, each of which is overseen by its own Buddha, was likened to that of a ruler governing a centralized, hierarchical state. Spiritual and temporal rulers became identified as one.

The Buddhist state or empire created a social order in which religion and politics were intertwined in the exercise of power.  As this norm replicated across polities, the spatial reach of a Buddhist state(s) thus became cosmopolitan, international, global. In East Asia, the efforts of Japan and Korea to import and partake of the “Sinic/Tang sphere of civilization,” of which Buddhism is a key component, between the sixth and eighth centuries, also provide a backdrop to understanding the spread of Buddhist ideals, and along with that religious institutions, sacred texts, rituals, and art forms. A study of this International Buddhist Art Style of East Asia is therefore an investigation into the dialectic dynamic of culture and power in the cosmopolitan order of a Buddhist state/empire in which art, along with texts and rituals, gave expression to this order.

A novel approach undertaken in this study is to frame the investigation of the formation, transmission, and subsequent transformation of this East Asian International Buddhist Art Style through narratives of the activities of three prominent pilgrim-monks. Far from the perception that Buddhist monks and nuns were primarily interested in doctrinal matters, their biographies and other kinds of evidence indicate that, from the very beginning, Buddhist clerics were intimately involved in image worship and rituals, and in matters related to the production of images and the building of Buddhist monuments.

The three prominent pilgrim-monks feature in this volume are: (1) the celebrated translator Xuanzang 玄奘 (ca. 602–64), who returned to China in 645 after his sixteen-year journey to India by way of Central Asia; (2) the Japanese student-monk Dōji 道慈 (d. 744), who went to China on an official mission and stayed there from 702 to 718; and (3) the master of Buddhist precepts Jianzhen 鑑真 (688–763; known in Japan as Ganjin), who finally reached Japan in 754, on his sixth attempt to cross the East China Sea. All three carried with them Buddhist icons and other artifacts on their journeys. In addition to guiding their imperial patrons on doctrinal and other clerical matters, they steered them in temple-building activities and in the production of Buddhist art objects and their uses. These three monks’ activities together encompass a broad spectrum of the Buddhist art subjects and devotional cults prominent during this period. The activities of many of their contemporaries are also mentioned, within the larger context described above.

Details: Buddhist Pilgrim-Monks as Agents of Cultural and Artistic Transmission: The International Buddhist Art Style in East Asia, ca. 645-770 is published by the National University of Singapore Press, in hardback, priced in local currencies.