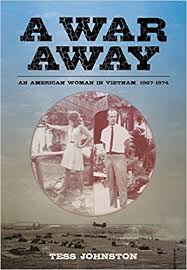 Diplomat, author and historian Tess Johnston has published extensively about Asia, including 15 books about architecture in Shanghai.

An American, Tess has lived and served abroad with the US Foreign Service and the Consulate General, for more than half a century, including more than 40 years in Asia. Her first Asian posting was to Vietnam from 1967-74, at the height of the war; her second was to Shanghai, where she lived and worked for more than 3 decades.

In Saigon, Tess snared a job with one of the most famous,or infamous, of American wartime leaders, John Paul Vann.

In her latest book, A War Away: An American Woman in Vietnam, 1967-1974 Tess recounts stories of her Vietnam years, including her eye-witness account of the Tet Offensive, and what it was like to be one the few American women there during those harrowing years.

Tess has an abiding love for both Vietnam and Shanghai. Here she compares her memories of each place.

So, over to Tess…

In 1967, my initial impression of Vietnam from the air was: what a lovely lush green country this is. This despite the fact that there was a very old war raging below, one in which I was soon to become involved.

In my seven years in Vietnam, traveling up and down the country mostly by chopper, the war's destruction was only intermittently visible but the broad sweep countryside that unrolled below us was almost uniformly a brilliant green. Flying south to north, it was a green of paddy fields with small winding creeks and water buffalo enjoying the rewards of their labor, the green of the dense jungle tops, and the pale green of distant hills. In a subsequent visit in another era many years later, I found the cities had grown, but I was delighted to find that the lush countryside beyond them was still there.

In no other country in which I have ever lived, before or after, did I find the beauty and lazy charm of Vietnam, my first Asian posting, with its lush countryside, its small hamlets and its gentle people. Even in the midst of a cruel war, for me it never lost its appeal.

It was that first Asian tour that led me a decade later to volunteer for a second Asian post, but this time one a bit farther north, and cooler: China. Not the southerly province of Guangdong but farther upcountry: the city of Shanghai. It too was then still surrounded by green paddy fields, soon to disappear under urban sprawl with the city's rapid growth. Gone was the lush tropics but the gain was a major city, then emerging from the country's internal conflicts to becoming a truly world-class one.

This last posting allowed me to watch Shanghai emerge as that city. In my 35 years' residence there I saw China shake off its conflicted past and the chaos of the Cultural Revolution, and move into the 21st century. Shanghai became a city of international business with an ever-growing Western community. But in that transition, unlike in Vietnam, the countryside around Shanghai got lost under urban sprawl. The same happened elsewhere in China, around its many emerging metropolises

In China - as in Vietnam - I had many local contacts and friends and I found their values much the same: those of family cohesion and the appreciation of their own cuisine above all others. The forty-plus years combined that I spent in these two Asian countries led me to treasure the opportunity I had to live - and love - the best of both.

Details: A War Away is published in paperback by Earnshaw Books, priced in local currencies.