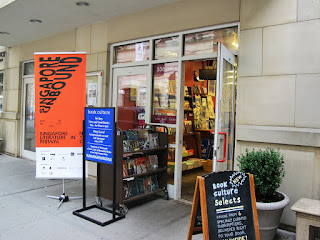 How was SG Unbound born, when, who created it?

It all began when writer and arts administrator Paul Rozario-Falcone and I got together one wintry afternoon in Cornelia Street Café, in New York City, to discuss the possibility of organizing a Singapore literature showcase in our adopted home. The literary scene in Singapore was growing, with new writers, presses, and publications, and we thought it was time to introduce the Big Apple to the Little Red Dot.

To rally support from the creative community in NYC, we started the Second Saturdays Reading Series, a monthly gathering featuring an open mike and a published author, and hosted in different private homes around the city. The first Second Saturdays gathering was held in Paul and Al’s home in Carroll Gardens in February 2014.

With the support of this community, we mounted the first Singapore Literature Festival in NYC in October that year, showcasing 14 Singaporean writers. The festival was so warmly received that I
was encouraged to make it a biennial event. At the 2nd Festival in September 2016, Singapore Unbound was officially launched.

What was the purpose and how it has changed over time (if at all)?

Our purpose has changed radically in a very short time. We’re now concerned to bring together Singaporean and American authors and audiences for in-depth conversations about literature and society. The 2nd Festival featured such tremendous American authors as Jessica Hagedorn, Gina Apostol, and Jason Koo, together with the Singaporeans Alfian Sa’at, Ovidia Yu, and Jeremy Tiang, to discuss hot-button topics such as sexuality, religion, and migration. Literature is still at the forefront of every event, but we want to explore the social conditions and functions of this great art, as well as its aesthetic and formal qualities.

Part of the stimulus for change came from Singapore. In 2016, the Media Development Authority banned Tan Pin Pin’s To Singapore With Love, a documentary film about Singapore’s political exiles, from public screening. Then the National Arts Council withdrew part of its publishing grant from Sonny Liew’s graphic novel The Art of Charlie Chan Hock Chye .

I was so outraged by these actions that I decided not to work with the Singapore government or to apply for any state funding. By raising funds through private donations and individual goodwill, Singapore Unbound is able to maintain its artistic and organizational independence. We can stand for social and political causes that we believe in. Our tagline is “Freedom of Expression. Equal Rights for All.”

What are the main activities of the organization?
In addition to the biennial festival and monthly reading series in NYC, Singapore Unbound offers writing fellowships to Singaporean writers to visit New York City and Thailand. Our first fellow Nur Sabrina bte Dzulkifli is staying in NYC for two weeks next month to work on a writing project. We announce the award of the Singapore Unbound Fellowship (Thailand) soon. The fellowships provide authors with the means to develop writing projects of significant social importance.

From the start, we have seen the importance not just of event organizing, but also of literary publishing. Our arts blog, SP Blog, commissions and publishes reviews of Singaporean books by Americans and vice versa, in an effort to strengthen cross-cultural understanding. SP Blog also publishes original poems, stories, essays, and artist interviews.

We’re very excited about our latest venture, a literary press called Gaudy Boy, which is dedicated to bringing Asian voices to America. Gaudy Boy publishes poetry, fiction and non-fiction of exceptional merit by authors of Asian heritage. Our first title, released just this month, is Malay Sketches, a short-story collection by the Singaporean author and social critic Alfian Sa’at. Book release events will be held in Harlem and the Upper West Side.

How do you stay in contact with other Asian, Asian-American groups?
In the USA, mostly through personal and professional friendships with the leaders and members of the Asian American Writers’ Workshop, the Asian American Literary Review, and Kundiman, an organization devoted to the develop of Asian American literary talent. I’m a poet myself and so I know many of the writers in the Asian American community.

More formally, I stay in contact through book fairs and conferences, such as the Asian American caucus at the recent Association of Writing Programs Conference in Tampa, Florida. There is also a growing network of North American scholars working in Southeast Asian studies, many originally from Singapore. They have set up a Southeast Asian caucus in the Modern Language Association Conference.

From your experience what has been the reception in the USA to SEA and Singapore literature in particular?
Vietnamese American Viet Thanh Nguyen’s novel The Sympathizer has been critically acclaimed, as was fellow Vietnamese American Monique Truong’s novel The Book of Salt. Filipino American Gina Apostol won a PEN award for her novel Gun Dealers’ Daughter. Singaporean Balli Kaur Jaswal, who is coming for the 3rd festival in NYC in October, published her third novel Erotic Stories for Punjabi Widows with Harper Collins. Another Singaporean author, and festival alum, Ovidia Yu publishes her very Singaporean mystery novels also with Harper Collins. My last book of poems Steep Tea was a finalist for the Lambda Awards. I think there is growing interest in Southeast Asian and Singapore literature in the USA. Readers want to read beyond the news headlines.
What are your plans and main activities for the year?
The 3rd Singapore Literature Festival in NYC will be held in October this year. It will again feature essential authors from both countries. The festival theme is “Say It Differently.” It will celebrate the power of literature to help us rethink our language and practices.

Gaudy Boy is also launching a poetry book prize for an unpublished English-language manuscript by an author of Asian heritage residing anywhere in the world. The Gaudy Boy Poetry Book Prize will be judged by the wonderful poet Wong May. Born in China, educated in Singapore, trained as a writer in the USA, and now residing with her family in Ireland, Wong May is a transnational writer before that term became fashionable.

How do you stay connected to the Singapore literary happenings? What do you miss the most about Singapore and its literary community?
I visit Singapore every summer to see family and so use the time to watch plays, attend readings, and hobnob with writers. Last July, when I was back, Singapore Unbound also held a number of events in Singapore: the first SU Fellowship Award Event, a panel on the Japanese influence on Singapore literature, and a marathon reading of émigré Goh Poh Seng’s book-length poem Lines from Batu Ferringhi. The year before last, we held a memorial reading for the late Malaysia-born, Singapore-educated, San Francisco writer Justin Chin. It’s important, I think, to remember the Singapore writers who moved away. Singapore the country may be small but Singapore the culture has spread far and wide. It’s vital for our literature to have the most expansive view of Singapore.

What I miss most: calling a fellow writer to go out for late-night prata and chitchat. It’s not easy to do so when you’re 9,521 miles away.