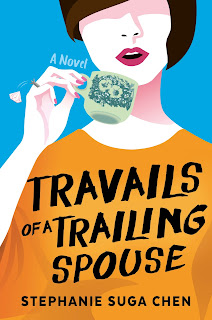 Trailing spouse is the dismissive name given to the non-working wives, and sometimes these days the house husbands, who trail along to expat postings in their partners' high-flying wakes.

Stephanie Suga Chen, a former investment banker and partner of a New York City-based private investment fund, moved to Singapore in 2012 with her husband, two children and elderly cocker spaniel. She is the author of a newly-released fictionalized memoir, Travails of a Trailing Spouse, in which she unveils the thrills, craziness, and frustrations, of being a trailing spouse.

Many people have asked about the title of my book, Travails of a Trailing Spouse. By many people, I mean my mother, who told me that it was hard to pronounce. She also asked what travails and trailing spouse meant - to those who are also wondering, feel free to check out the FAQ on my author website.

Actually, I had struggled for months to come up with a title that aptly summarized the themes of marriage, friendship and self-discovery that the book covers. The original working title was It Has to be Me: Life, Love and Friendship in Singapore, but it was discarded by my publisher as being too long and, sounding too much like a non-fiction memoir.

To be clear, I do identify with the main character, Sarah Lee, an American woman who leaves her high-powered career when her husband receives a can't-refuse job offer in Singapore, but the story is fiction: Was my husband actually arrested? Did I really find mold all over my apartment? Was Singapore Prime Minister Lee Hsien Loong's name truly brought up in a marital fight? I'll leave the reader to wonder!

I mulled over various potential titles, including An Expat Wife in Singapore: Life on a Dependent Pass, a reference to the appropriate-yet-unfortunate name of the pass that trailing spouses are issued, but that was dismissed as well, as were Life and Love Abroad; An Expat Adventure; Sarah in Singapore, and about a dozen other incarnations. None seemed to convey the humour and lightheartedness of the book in addition to its more serious themes.

Frustrated, I went online and entered a handful of keywords in the search bar, to see if the Internet could offer me any suggestions, and also to make sure I didn't use a title that had already been taken. Here are notes about three of the books I came upon - all of them about expat life in Asia.

The Expatriates, by Janice Y.K. Lee
A beautifully written novel about three expat women living in Hong Kong, The Expatriates covers some pretty heavy topics, including infertility, infidelity, and family tragedy. Mercy is a 27-year-old Korean-American Ivy League grad who, after failing to find a career commensurate with her education, came to Hong Kong three years ago for a fresh start. Margaret is a trailing spouse who needs a babysitter to help with her three children on a family vacation. Hilary is from San Francisco; she has a domestic helper, a driver, and a country club membership, but is desperate for a child. The three women's lives intersect in this quite sombre novel.

Diary of an Expat in Singapore, by Jennifer Gargiulo
A compilation of posts from the author's blog of the same name, this book contains 44 short, amusing chapters that can be read in any order. My personal favorite is Chapter 8, Stuff Expat Moms in Singapore Say - #12, Lombok is the way Bali used to be. There's a bit of repetition and it probably appeals more to expats in Singapore than to more general readers, but all-in-all, it's a fun read. If you do happen to be an expat living in Singapore, it would be a great book to have on a side table in your guestroom for overnight visitors to leaf through before bedtime - that is, if you're lucking enough to have a guestroom and one that's big enough to have a side table!

The Expat, by Patricia Snel
Originally published in Dutch, The Expat is a suspense thriller and contains the requisite amount of expat decadence, suspicious-acting husbands, steamy sex scenes, and a touch of human-trafficking thrown in. What else do you need for a good beach read?

Now, back to my own Travails of a Trailing Spouse - it was my publisher who finally suggested the title, and, on reflection, I concluded that it was indeed perfect for my novel. The phrase trailing spouse sums up a lot, capturing the sentiment of feeling dependent on, and less significant than, one's partner, and the word travails adds just a bit of exaggeration to provide levity to the front cover.

Details
Travails of a Trailing Spouse is published in paperback by Straits Times Press, priced in local currencies.